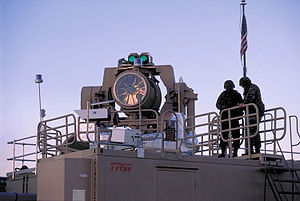 On July 18, 1996, the United States and Israel entered into an agreement to produce a cooperative THEL called the Demonstrator, which would utilize deuterium fluoride laser chemical laser technologies. Primary among the four contractors awarded the project on September 30, 1996 are Northrop Grumman (formerly TRW). THEL conducted test firing in FY1998, and Initial Operating Capability (IOC) was planned in FY1999. However this was significantly delayed due to reorienting the project as a mobile, not fixed design, called Mobile Tactical High Energy Laser (MTHEL). The original fixed location design eliminates most weight, size and power restrictions, but is not compatible with the fluid, mobile nature of modern combat. The initial MTHEL goal was a mobile version the size of three large semi trailers. Ideally it would be further downsized to a single semi trailer size. However, doing this while maintaining the original performance characteristics is difficult. Furthermore, the Israeli government, which had been providing significant funding, decreased their financial support in 2004, postponing the IOC date to at least 2010.

On November 4, 2002, THEL shot down an incoming artillery shell. A mobile version completed successful testing. During a test conducted on August 24, 2004 the system successfully shot down multiple mortar rounds. The test represented actual mortar threat scenarios. Targets were intercepted by the THEL testbed and destroyed. Both single mortar rounds and salvo were tested.

Even though military experts such as the former head of the Administration for the Development of Weapons and the Technological Industry, Aluf Yitzhak Ben Yisrael, were calling for the implementation of the THEL, the project was discontinued.[1] During the 2006 Israel-Lebanon conflict, Ben Yisrael, currently the chairman of the Israeli Space Agency, renewed his calls to implement the THEL against high-trajectory fire.

In theory certain countermeasures could reduce the effectiveness of THEL. A review of the types of technologically feasible countermeasures would include (though not be limited to) the following :

Many of the countermeasures that have been considered do not take into account the added cost, complexity, and weight that is added to the offensive device. These may reduce the offensive weapon's capability in terms of range, speed, and/or detonation potential. Adding any of the types of mechanisms listed would be much more complicated than simply adding another laser beam (hence doubling the power), from a defensive perspective. Also note that as the offensive threat comes closer to its intended target, it is receiving even more irradiation than further away, hence increasing its exposure to laser energy (larger fluence) and decreasing its probability of impact.