This edition of the Paris Motor Show featured a high number of hybrid and electric vehicles (EVs), a tectonic shift that led a New York Times blogger to ask, "Who killed the non-electric cars?".[1] 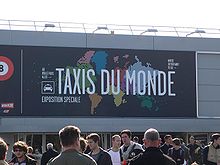 As usual, Hall 8 hosted a special exhibition. In this edition, the subject was "Taxis du Monde" (Taxis from around the world), and it featured a variety of taxi vehicles from different cities and eras, such as a New York Checker cab, a Chicago Yellow Cab, London Black cabs, a Manila Jeepney, a Bangkok Tuk Tuk, etc., as well as several Parisian taxis, starting with the classic Renault Taxi de la Marne and ending with the proposed future taxi Peugeot Expert Tepee.