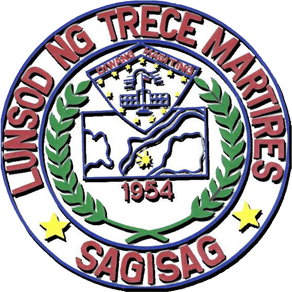 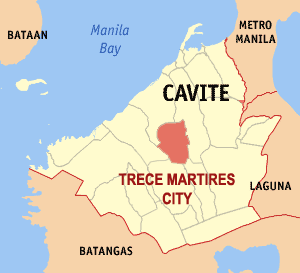 It is named after the , who were executed by the Spaniards on , .

With the continuous expansion of Metro Manilla, the city is now included in Manilla built up area which reaches Lipa City in its southernmost part.

Trece Martires City is politically subdivided into 13 s (4 urban and 9 rural). It is not coincidence but design that the city was subdivided into thirteen barangays; this was planned by Senator Justiniano Montano and Congressman Jose Cajulis, who played a major role in creating the city. Each barangay was named after one of the Thirteen Martyrs of Cavite to commemorate their bravery and heroism. Below are the names of the thirteen baranagys and the name they carried before the City's Charter was passed on May 24, 1954.

Trece Martires City is strategically located at the heart of the Province of Cavite. Its major source of income is real property taxes. Agriculture has long been neglected in favor of commercialism and industrialization. With its 14.75% growth-rate, the projected population by 2010 is 110,000. The major cause of this ballooning population is in-migration (which is gladly facilitated by the LGU even though it is not sustainable, in order to support the incumbents for the upcoming 2010 elections).

The most noteworthy fact about this city is its cleanliness and the absence of any form of gambling. The city has been awarded in the fields of nutrition, health services, cleanliness, literacy, education and social services. With its small land area and its income, the city is fairly manageable in terms of public works, infrastructure and provision of basic services to the residents.

The city government provides the following assistance to its indigent: financial, medical, emergency, school fees and burial expenses. It has extensive programs for the elderly, solo parents, out-of-school youths and mothers. One of its most admirable programs is their blood donation activity every March, May, September and December; Balik Ewskwela (school supplies distribution to all public elementary and highschool students); clean and green; revitalization of agricultural lands, high school and college scholarship and their livelihood programs. These programs all look good on paper, but are mundane in actuality.

As of 2007, this city is considered one of the most beautiful and prosperous cities in Cavite. This is to be attributed to the admirable leadership of the current mayor.