A diamondoid, in the context of building materials for nanotechnology components, most generally refers to structures that resemble diamond in a broad sense: namely, strong, stiff structures containing dense, 3-D networks of covalent bonds, formed chiefly from first and second row atoms with a valence of three or more. Examples of diamondoid structures would include crystalline diamond, sapphire, and other stiff structures similar to diamond but with various atom substitutions which might include N, O, Si, S, and so forth. Sp²-hybridized carbon structures that – in contrast to sp³-hybridized carbon in diamond – arrange in planar sheets ("graphene" sheets) are sometimes also included in the class of diamondoid materials for nanotechnology, e.g., graphite, carbon nanotubes consisting of sheets of carbon atoms rolled into tubes, spherical buckyballs and other graphene structures.

In the context of classical chemistry, "diamondoid" refers to variants of the carbon cage molecule known as adamantane (C10H16), the smallest unit cage structure of the diamond crystal lattice. Diamondoids also known as nanodiamonds or condensed adamantanes may include one or more cages (adamantane, diamantane, triamantane, and higher polymantanes) as well as numerous isomeric and structural variants of adamantanes and polymantanes. These diamondoids occur naturally in petroleum deposits and have been extracted and purified into large pure crystals of polymantane molecules having more than a dozen adamantane cages per molecule.[1] These species are of interest as molecular approximations of the cubic diamond framework, terminated with C-H bonds. Cyclohexamantane may be thought of as a nanometer-sized diamond of approximately 5.6 * 10−22 grams.[2]

One tetramantane isomer is the largest ever diamondoid prepared by organic synthesis. The first ever isolation of a wide range of diamondoids from petroleum took place in the following steps [1]: a vacuum distillation above 345 °C, the equivalent atmospheric boiling point, then pyrolysis at 400 to 450 °C in order to remove all non-diamondoid compounds [3] and then a series of HPLC separation techniques.

In one study a tetramantane compound is fitted with thiol groups at the bridgehead positions.[4] This allows their anchorage to a gold surface and formation of self-assembled monolayers (diamond-on-gold).

Organic chemistry of diamondoids even extends to pentamantane.[5] The medial position (base) in this molecule is calculated to yield a more favorable carbocation than the apical position (top) and simple bromination of pentamane 1 with bromine exclusively gives the medial bromo derivative 2 which on hydrolysis in water / DMF forms the alcohol 3. 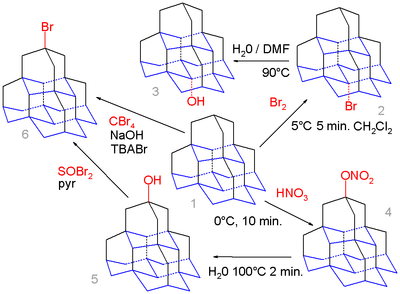 In contrast nitroxylation of 1 with nitric acid gives the apical nitrate 4 as an intermediate which is hydrolyzed to the apical alcohol 5 due to the higher steric demand of the active electrophilic NO2 - HNO3+ species. This alcohol can react with thionyl bromide to the bromide 6 and in a series of steps (not shown) to the corresponding thiol. Pentamantane can also react with tetrabromomethane and tetra-n-butylammonium Bromide (TBABr) in a free radical reaction to the bromide but without selectivity.

Origin and occurrence of diamondoids

Diamondoids are found in mature high-temperature petroleum fluids (volatile oils, condensates and wet gases). These fluids can have up to a spoonful of diamondoids per gallon (about 3.78 liters).[citation needed] A review by Mello and Moldowan in 2005 showed that although the carbon in diamonds is not biological in origin, the diamondoids found in petroleum are composed of carbon from biological sources. This was determined by comparing the ratios of carbon isotopes present.[6]