Harry Partch
Not to be confused with Harry Patch. 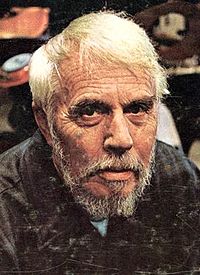 Harry Partch (June 24, 1901 – September 3, 1974) was an American composer and instrument creator. He was one of the first twentieth-century composers to work extensively and systematically with microtonal scales, writing much of his music for custom-made instruments that he built himself, tuned in 11-limit (43-tone) just intonation. 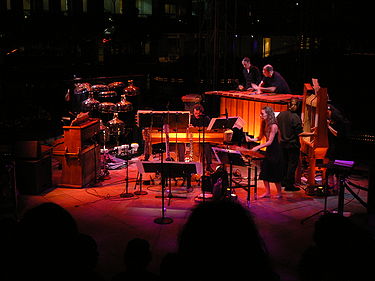 Harry Partch's instruments in performance by the Partch Ensemble

Partch was born on June 24, 1901 in Oakland, California soon after his parents, both Presbyterian missionaries, fled the Boxer Rebellion in China. He spent his childhood in small, remote towns in Arizona and New Mexico, where he heard and sang songs in Mandarin, Spanish, and American Indian languages.

As a child, he learned to play the clarinet, harmonium, viola, piano, and guitar. He began to compose at an early age, using the equal-tempered chromatic scale, the tuning system most common in Western music. However, Partch grew frustrated with what he felt were imperfections of the standard system of musical tuning, believing that this system was unsuitable for reflecting the subtle melodic contours of dramatic speech and, as a result, he burned all of his early works.

Interested in the potential musicality of speech, Partch invented and constructed instruments that could underscore the intoning voice, and he developed musical notations that accurately and practically instructed players as to how to play the instruments. His first such instrument was the Monophone, later known as the Adapted viola.

Partch secured a grant that allowed him to go to London to study the history of tuning systems and text-setting. In Dublin [1], he met the poet William Butler Yeats with the intention of gaining Yeats' permission to write an opera based on the poet's translation of Sophocles' Oedipus the King. In his opera, Partch transcribed the inflections of actors from the Abbey Theatre reciting lines from Sophocles' play, and Partch performed this music on his Monophone while intoning "By the Rivers of Babylon". Yeats responded enthusiastically, saying, "A play done entirely in this way, with this wonderful instrument, and with this type of music, might really be sensational", and he gave Partch's idea his blessing.

Partch then set out to build more instruments with which to realize his burgeoning opera. However, after his grant money ran out, he was forced to return to the U.S., which was at the height of the Depression. There, he lived as a hobo, traveling around on trains and taking casual work where he could find it. He continued in this way for ten years, chronicling his experiences in a journal named Bitter Music. The entries frequently included overheard bits of everyday vernacular speech, wherein Partch transcribed the speaker's pitches on musical staves. This technique, which had been used earlier by the Florentine Camerata, Berlioz, Mussorgsky, Debussy, Schoenberg, Leoš Janáček and others (and would be later used by Steve Reich), was to become a standard approach to vocal scoring in Partch's work.

In 1941, Partch wrote Barstow, a work whose text comes from eight pieces of graffiti Partch had spotted on a highway railing in Barstow, California. The piece, originally for voice and guitar, was transcribed several times throughout the composer's life as his collection of instruments grew. 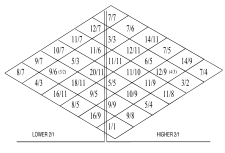 The 11-limit tonality diamond, part of the basis for Partch's microtonalism

In 1943, after receiving a grant from the Guggenheim Foundation, Partch was able to dedicate more time to music. He returned to his Oedipus Project, although the executors of Yeats' estate refused to grant him permission to use Yeats' translation, and he had to make his own; a recording with Yeats' translation has since been released, Yeats' text having passed into the public domain.[2] While living briefly in Ithaca, New York,[3] he began work on US Highball, a musical evocation of riding the rails as a Depression-era hobo.

In 1949, a book Partch had been working on since 1923 was eventually published as Genesis of a Music. It is an account of his own music with discussions of music theory and music instrument design. Today, it is considered a standard text of microtonal music theory and takes his concept of "Corporeality", the fusion of all art forms with the body, as its central focus.

He went on to write the "dance satire" The Bewitched and Revelation in the Courthouse Park, a work based in large part on Euripides' The Bacchae. Delusion of the Fury (1969) is considered by some[who?] as his greatest work.

Partch is famous for his 43-tone scale, even though he used many different scales in his work and the number of divisions is theoretically infinite. He created and maintained his own record label, "Gate 5", to release recordings of his works and generate income. Towards the end of his life, Columbia Records made recordings of some of his works, including Delusion of the Fury, which helped increase public attention to his work. He remains a somewhat obscure figure, but is well-known to experimental musicians (especially those interested in microtonality) and instrument-builders, and he is considered by many[who?] to be one of the most significant composers of the 20th century.

Partch, an uncle of the cartoonist Virgil Partch,[4] was sterile, probably due to childhood mumps, and most of his romantic relationships were with men.[5] He died on September 3, 1974 in San Diego, California from a heart attack.

In 1974, Partch was inducted into the Hall of Fame of the Percussive Arts Society, a music service organization promoting percussion education, research, performance and appreciation throughout the world.[6] In 2004, U.S. Highball was selected by the Library of Congress's National Recording Preservation Board as "culturally, historically, or aesthetically significant".[7] 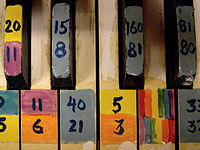 Part of the keyboard of the Chromalodeon

Harry Partch's desire to use a different system of tuning inspired him to modify existing instruments and create new ones. He was, in his own words, "a philosophic music-man seduced into carpentry".

His adapted instruments include the Adapted Viola (a viola fitted with a cello neck which extends the range by a fourth, and has changeable bridges to allow triple-stops to be sustained) and three Adapted Guitars: a guitar with the equal tempered frets replaced by a complex system of justly tuned frets, a guitar tuned in octaves, or 2/1's, played by moving a pyrex rod along the strings, much like a slide guitar, and a 10-string fretless guitar played in a similar manner to his other fretless guitar, but with a wildly different tuning.

He re-tuned the reeds of several reed organs and labeled the keys with a color code. The first one was called the Ptolemy, in tribute to the ancient music theorist Claudius Ptolemaeus, whose musical scales included ratios of the 11-limit, as Partch's did. The others were called Chromelodeons, a portmanteau of chrome (meaning "color") and melodeon. 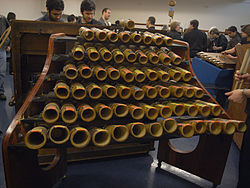 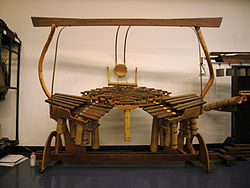 Partch also designed and built many instruments from raw materials:

In 1990, Dean Drummond's Newband became custodians of the original Harry Partch instrument collection, and the group frequently performs with and commissions new pieces for Partch's instruments.

The instruments have been housed in the Harry Partch Instrumentarium at Montclair State University in Montclair, New Jersey since 1999. In 2004, the instruments crossed campus into the newly constructed Alexander Kasser Theater, which provides a large studio space in the basement. Concerts by Newband and MSU's Harry Partch Ensemble may be viewed several times a year in this hall. 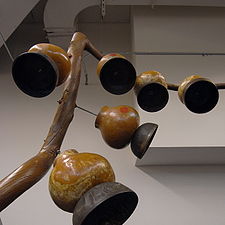 Part of the Gourd Tree 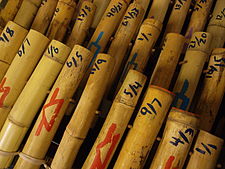