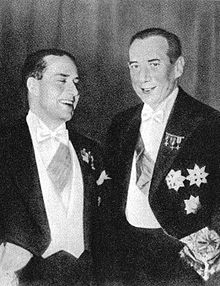 Gian Galeazzo Ciano, 2nd Count of Cortellazzo and Buccari (18 March 1903 – 11 January 1944) was an Italian Minister of Foreign Affairs and Benito Mussolini's son-in-law. In early 1944 Count Ciano was shot by firing squad at the behest of his father-in-law, Mussolini under pressure from Nazi germany.

Ciano was born in Livorno, Italy, in 1903, to an aristocratic family. He was the son of Count Costanzo Ciano and his wife Carolina Pini; his father was an Admiral and World War I hero in the Royal Italian Navy, founding member of the National Fascist Party and re-organizer of the Italian Merchant Marine in the 1920s. The elder Ciano (he was nicknamed Ganascia, meaning "The Jaw") was not above making a private profit from his public office; and as a side effect his son was soon used to living a high-profile glamorous life, which he continued to maintain until almost the end. After studying Philosophy of Law, the younger Ciano had a brief experience as a journalist before choosing a diplomatic career, and served as an attaché in Rio de Janeiro. On 24 April 1930, he married Benito Mussolini's daughter Edda Mussolini, with whom he soon left for Shanghai where he served as Italian Consul. Back in Italy, a few years later, he became the minister of press and propaganda. 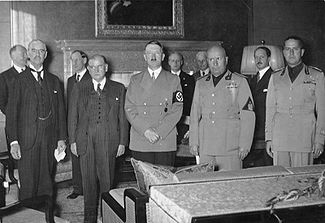 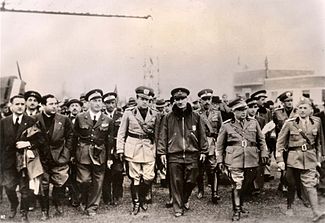 Ciano took part in the Italian invasion of Ethiopia (1935–36) as a bomber squadron commander (his unit, 15ª squadriglia da bombardamento, was dubbed "La Disperata") where his future opponent Alessandro Pavolini served as lieutenant. Upon his highly-trumpeted comeback as a "hero" he became Foreign Minister in 1936, replacing Mussolini. The following year he was allegedly involved in organizing the murder of the brothers Carlo Rosselli and Nello Rosselli, two exiled anti-fascist major activists killed in the French spa town of Bagnoles-de-l'Orne on 9 June 1937. In 1937, prior to the Italian annexation, Count Gian Galeazzo Ciano was Honorary Citizen of Tirana, Albania.[1]

After 1939, Ciano became increasingly disenchanted with Nazi Germany and the course of World War II, although when the Italian regime embarked in the ill-advised "parallel war" alongside Germany, he went along fairly convinced, even through the terribly-devised Italian invasion of Greece and its subsequent setbacks. Prior to the German campaign in France in 1940 Count Ciano leaked a warning of imminent invasion to neutral Belgium. In the spring of 1943 following the Axis defeat in North Africa, other major setbacks on the Eastern Front, and the Anglo-American assault on Sicily looming on the horizon, Ciano turned against prosecution of the doomed war and actively pushed for Italy's exit from the conflict. He was silenced by being removed from his post and reassigned as ambassador to the Holy See. In this role he could remain in Rome, to be watched closely by Mussolini. The Regime's position had become even more shaky with the coming summer, however, and court circles were already probing the Allies commands for agreements of some sort.

On the night of 24 July 1943, Mussolini summoned the Fascist Grand Council to its first meeting since 1939. At that meeting, Mussolini announced that the Germans were thinking of evacuating the south. This led Count Dino Grandi to launch a blistering attack on his longtime comrade. Grandi put on the table a resolution asking the king to resume his full constitutional powers—in effect, a vote leading to Mussolini's total ousting from leadership. The motion won by an unexpectedly large margin, 19-7, with Ciano voting in favor.

Mussolini did not think the vote had any substantive value, and showed up at work the next morning like any other day. That afternoon, Victor Emmanuel III, the King, summoned him to the palace and dismissed him from office. Upon leaving the palace, Mussolini was arrested. For the next two months he was moved from place to place to hide him from the Germans. Ultimately Mussolini was sent to Gran Sasso, a mountain resort in central Italy (Abruzzo). He was kept there in complete isolation until rescued by the Germans. Mussolini then set up a puppet government in the area of northern Italy still under German occupation called the Repubblica Sociale Italiana (R.S.I.).

Ciano, having been dismissed from his post by the new government, attempted to find shelter in Nazi Germany, alongside Edda and their three children. The Germans, however, returned him to R.S.I. agents and he was then formally arrested for treason. Under German and Fascist pressure, Mussolini had Ciano tried. After the Verona trial sentence, a Fascist firing squad, at a shooting range in Verona on 11 January 1944, executed Ciano and others (including Emilio De Bono and Giovanni Marinelli) who had voted for Mussolini's ousting. The executed Italians were tied to chairs and shot in the back as a further humiliation, though at the last moment Ciano managed to twist around in his chair to face the firing squad. Ciano was effectively executed for dissenting against Il Duce's will.[2]

Ciano is remembered for his famous Diaries 1937–1943, a daily record of the his meetings with Mussolini, Hitler, von Ribbentrop, foreign ambassadors and other political figures that proved embarrassing to the Nazi leadership and the Fascist diehards. Edda tried to barter his papers in return for his life with the help of factions in the German high command; Gestapo agents helped her confidant Emilio Pucci rescue some of them from Rome. Pucci was then a lieutenant in the Italian Air Force, but would find fame after the war as a fashion designer. When Hitler vetoed the plan, Edda hid the bulk of the papers at a clinic in Ramiola, near Medesano and on 9 January 1944, Pucci helped her escape to Switzerland with the 5 diaries covering the war years.[3] The diary was first published in 1946 in English in New York in an incomplete version. The complete English version was published in 2002.