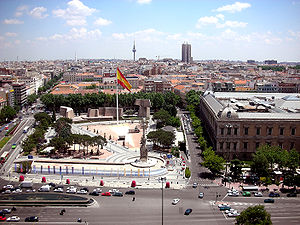 Plaza de Colón (Columbus Square, in English) is located in the Alonso Martínez district of Madrid, Spain. This plaza and its fountain commemorate the explorer Christopher Columbus, whose name in Spanish was Cristóbal Colón.

On the Paseo de la Castellana (Promenade of the Castilian) side there is a monument to Columbus built in 1885. This is a statue of Columbus standing at the pinnacle of a tall column. He appears to be pointing west, indicating the route he would take towards the islands of the Caribbean.

The second monument on the Serrano Street. side consists of concrete macro-sculptures by Joaquín Vaquero Turcios. The concrete blocks are decorated with inscriptions by philosophers and indigenous leaders.

The gardens in the plaza are known as the "Jardines del Descubrimiento" (Gardens of Discovery), where the Royal Mint was located until 1970.

At the base of the Columbus monument is a large fountain with a broad cascade of water. There are steps leading under the cascade and beneath the plaza, where the roar of the fountain is amplified. Under the plaza along with the Centro Cultural de la Villa de Madrid (Madrid City Cultural Centre) lies a stop for a special shuttle that takes passengers to Barajas Airport.

At the other side of the Plaza are the twin Torres de Colón.