The system is governed by a Board of Trustees consisting of thirteen members: the governor of Illinois serves as an ex officio member, nine trustees are appointed by the Illinois Governor, and a student trustee elected by referendum represents each of the university's three campuses. One of the three student trustees is designated by the governor to have a vote. 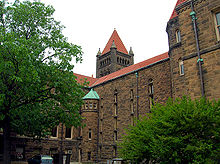 Altgeld Hall on the Urbana campus. 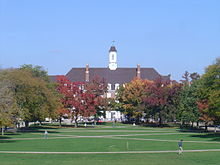 Illini Union on the Urbana campus.

It is also home to the National Center for Supercomputing Applications, NCSA, where Marc Andreessen (of Netscape fame) and others helped develop the Mosaic web browser, the first HTML browser capable of rendering images. In addition, in 1987, NCSA created NCSA Telnet, a program which permitted users access to the supercomputer's resources remotely. The petascale Blue Waters to be completed in 2011 is among the world's fastest supercomputers.

UIUC and its alumni are particularly well-known for their contributions to engineering, including inventions such as the LED, plasma screen, and integrated circuit. The library is notable both for being the largest public academic library[3] in the country, with over forty departmental libraries, and for possessing over twelve million volumes.[4] Each year, the library circulates about 1.2 million items and answers about 293,000 reference questions. The University is highly ranked in engineering, law, library and information science, chemistry, computer science, labor and industrial relations, educational psychology, finance, accounting, business administration, communication, and music.[5] Physics professor John Bardeen won the Nobel Physics Prize twice in his lifetime, an honor no other researcher has received. The school's marching band, named the Marching Illini, also enjoys a superb reputation. Until recently, the symbol of the University's athletic teams was a Native American figure, Chief Illiniwek, which had sparked significant controversy. Chief Illiniwek completed his last performance on February 21, 2007 and has since been retired from performing and as the official symbol of the school.

Currently the campus boasts the world's most technologically advanced[citation needed] Computer Science building, Siebel Center, as well as many other world-class research laboratories such as Loomis Laboratory of Physics. 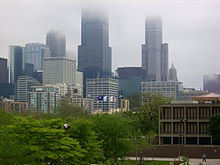 The Chicago Loop as seen from the UIC Campus.

The modern UIC was formed in 1982 by the consolidation of two U. of I. campuses: the Medical Center campus, which dates back to the nineteenth century; and the comprehensive Chicago Circle campus, which in 1965 replaced the two-year undergraduate Navy Pier campus designated to educate returning veterans. This consolidation and expansion is why "UIC" is the preferred shortened name today.

UIC’s student body is recognized as the nation’s eleventh most diverse, and it reflects the global character of Chicago.

The newest campus is University of Illinois at Springfield, formerly Sangamon State University from 1969 until June 30, 1995. It is the smallest in the Illinois system with the lowest student/teacher ratio of all three campuses, and is located in Springfield, Illinois, the state capital of Illinois. The University of Illinois system transitioned Sangamon State University from an upper division university into a full four-year institution with an undergraduate program, and now enrolls approximately 275 freshmen, including 125 honors students each year to the Capital Scholars Honors Program.

UIS serves almost 5,000 students in 20 master's degree, 20 undergraduate programs, and a Doctorate in Public Administration. The academic curriculum of the campus emphasizes a strong liberal arts core, an array of professional programs, extensive opportunities in experiential education, and a broad engagement in public affairs issues in its academic and community service pursuits.

The 2008-2009 sports seasons will be the last for UIS as a member of the NAIA. UIS is becoming an NCAA Division II. The institution received a formal invitation to join the GLVC athletic conference starting in the fall of 2009, provided it has installed a baseball program by 2010 or it will lose its membership.

In May 2009, the Board of Trustees voted to phase out the Global Campus Initiative. The University of Illinois transitioned the programs developed by the Global Campus to academic units on the corresponding residential campuses.

Inclusive of all graduates, current and former students of the University of Illinois, the University of Illinois Alumni Association has the largest alumni membership in the world with more than 600,000 members internationally. The UIAA has offices at each UI campus in Urbana-Champaign, Springfield and Chicago, as well as the Alumni Career Center in Chicago’s Loop, which offers comprehensive career services to all UI alumni. In addition to hosting events, awards programs, and regional and special-interest alumni groups, the UIAA publishes a variety of communications vehicles to inform and connect alumni with the University and each other. It also coordinates the Illinois Connection legislative advocacy network and the EXPLORERS alumni travel program.