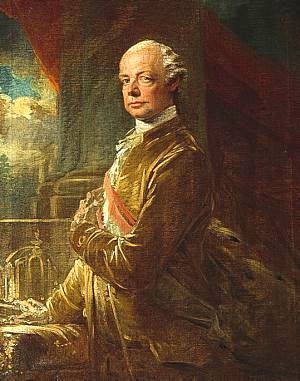 Leopold was born in , a third son, and was at first educated for the priesthood, but the theological studies to which he was forced to apply himself are believed to have influenced his mind in a way unfavourable to the Church.Clarifyme|date=March 2008Fact|date=July 2007 On the death of his elder brother Charles in 1761, it was decided that he should succeed to his father's of Tuscany, which was erected into a "secundogeniture" or for a second son. This settlement was the condition of his marriage on , with Maria Louisa, daughter of and . On the death of his father Francis I (, ), he succeeded to the grand duchy.

For five years, he exercised little more than nominal authority, under the supervision of counsellors appointed by his mother. In 1770, he made a journey to Vienna to secure the removal of this vexatious guardianship and returned to Florence with a free hand. During the twenty years which elapsed between his return to Florence and the death of his eldest brother Joseph II in 1790, he was employed in reforming the administration of his small state. The reformation was carried out by the removal of the ruinous restrictions on industry and personal freedom imposed by his predecessors of the house of and left untouched during his father's life, by the introduction of a rational system of taxation, and by the execution of profitable public works, such as the drainage of the Val di Chiana. As he had no army to maintain, and as he suppressed the small naval force kept up by the Medici, the whole of his revenue was left free for the improvement of his state. Leopold was never popular with his Italian subjects. His disposition was cold and retiring. His habits were simple to the verge of sordidness, though he could display splendour on occasion, and he could not help offending those of his subjects who had profited by the abuses of the Medicean régime.

But his steady, consistent, and intelligent administration, which advanced step by step, brought the grand duchy to a high level of material prosperity. His ecclesiastical policy, which disturbed the deeply rooted convictions of his people and brought him into collision with the pope, was not successful. He was unable to secularize the property of the religious houses or to put the clergy entirely under the control of the lay power. However, his abolition of was the first permanent abolition in modern times. On 30 November 1786, after having de facto blocked capital executions (the last was in 1769), Leopold promulgated the reform of the penal code that abolished the death penalty and ordered the destruction of all the instruments for capital execution in his land. Torture was also banned. In 2000 Tuscany's regional authorities instituted an annual holiday on 30 November to commemorate the event. The event is also commemorated on this day by 300 cities around the world celebrating the Cities for Life Day.

Leopold also approved and collaborated on the development of a political constitution, said to have anticipated by many years the promulgation of the French constitution and which presented some similarities with the Virginia Bill of Rights of 1778. Leopold's concept of this was based on respect for the political rights of citizens and on a harmony of power between the executive and the legislative. However, it could not be put into effect because Leopoldo moved to Vienna to become emperor in 1790, and because it was so radically new that it garnered opposition even from those who might have benefitted from it.

However, Leopoldo developed and supported many social and economic reforms. vaccination was made systematically available, and an early institution for the rehabilitation of juvenile delinquents was founded. Leopold also introduced radical reforms to the system of neglect and inhumane treatment of those deemed mentally ill. On 23 January 1774, the "legge sui pazzi" (law on the insane) was established, the first of its kind to be introduced in all Europe, allowing steps to be taken to hospitalize individuals deemed insane. A few years later Leopold undertook the project of building a new hospital, the . He used his skill at choosing collaborators to put a young physician, , at its head. Chiarugi and his collaborators introduced new humanitarian regulations in the running of the hospital and caring for the mentally ill patients, including banning the use of chains and physical punishment, and in so doing have been recognized as early pioneers of what later came to be known as the movement.

During the last few years of his rule in Tuscany, Leopold had begun to be frightened by the increasing disorders in the German and Hungarian dominions of his family, which were the direct result of his brother's headlong methods. He and Joseph II were tenderly attached to one another and met frequently both before and after the death of their mother. The portrait by in which they appear together shows that they bore a strong personal resemblance to one another. But it may be said of Leopold, as of Fontenelle, that his heart was made of brains. He knew that he must succeed his childless eldest brother in Austria, and he was unwilling to inherit his unpopularity. When, therefore, in 1789 Joseph, who knew himself to be dying, asked him to come to Vienna and become co-regent, Leopold coldly evaded the request.

He was still in Florence when Joseph II died at Vienna on , and he did not leave his Italian capital until .

Leopold, during his government in Tuscany, had shown a speculative tendency to grant his subjects a constitution. When he succeeded to the Austrian lands, he began by making large concessions to the interests offended by his brother's innovations. He recognized the Estates of his different dominions as "the pillars of the monarchy," pacified the Hungarians, and divided the Belgian insurgents by concessions. When these failed to restore order, he marched troops into the country and re-established his own authority, and at the same time the historic franchises of the Flemings. Yet he did not surrender any part that could be retained of what Maria Theresa and Joseph had done to strengthen the hands of the state. He continued, for instance, to insist that no could be published in his dominions without his consent (placetum regium).

If Leopold's reign as emperor and king of and had been prolonged during years of peace, it is probable that he would have repeated his successes as a reforming ruler in Tuscany on a far larger scale. But he lived for barely two years, and during that period he was hard pressed by peril from west and east alike. The growing revolutionary disorders in endangered the life of his sister , the queen of Louis XVI, and also threatened his own dominions with the spread of a subversive agitation. His sister sent him passionate appeals for help, and he was pestered by the royalist emigrants, who were intriguing to bring about armed intervention in France.

From the east he was threatened by the aggressive ambition of and by the unscrupulous policy of . Catherine would have been delighted to see Austria and Prussia embark on a crusade in the cause of kings against the . While they were busy beyond the , she would have annexed what remained of and made conquests against the . Leopold II had no difficulty in seeing through the rather transparent cunning of the Russian empress, and he refused to be misled.

To his sister, he gave good advice and promises of help if she and her husband could escape from . The emigrants who followed him pertinaciously were refused audience, or when they forced themselves on him, were peremptorily denied all help. Leopold was too purely a politician not to be secretly pleased at the destruction of the power of France and of her influence in Europe by her internal disorders. Within six weeks of his accession, he displayed his contempt for her weakness by practically tearing up the treaty of alliance made by Maria Theresa in 1756 and opening negotiations with to impose a check on Russia and Prussia.

He was able to put pressure on England by threatening to cede his part of the Low Countries to France. Then, when sure of English support, he was in a position to baffle the intrigues of Prussia. A personal appeal to led to a conference between them at Reichenbach in July 1790, and to an arrangement which was in fact a defeat for Prussia: Leopold's coronation as king of Hungary on , 1790, preceded by a settlement with the diet in which he recognized the dominant position of the . He had already made an eight months' truce with the Turks in September, which prepared the way for the termination of the war begun by Joseph II, the peace of being signed in August 1791. The pacification of his eastern dominions left Leopold free to re-establish order in and to confirm friendly relations with England and Holland.

During 1791, the emperor continued to be increasingly preoccupied with the affairs of France. In January, he had to dismiss the Count of Artois, afterwards Charles X, king of France, in a very peremptory way. His good sense was revolted by the folly of the French emigrants, and he did his utmost to avoid being entangled in the affairs of that country. The insults inflicted on Louis XVI and Marie Antoinette, however, at the time of their attempted flight to Varennes in June, stirred his indignation, and he made a general appeal to the sovereigns of Europe to take common measures in view of events which "immediately compromised the honour of all sovereigns, and the security of all governments." Yet he was most directly interested in the conference at Sistova, which in June led to a final peace with Turkey.

On August 25, he met the king of Prussia at Pillnitz, near , and they drew up a declaration of their readiness to intervene in France if and when their assistance was called for by the other powers. The declaration was a mere formality, for, as Leopold knew, neither Russia nor England was prepared to act, and he endeavoured to guard against the use which he foresaw the emigrants would endeavour to make of it. In face of the agitation caused by the Pillnitz declaration in France, the intrigues of the emigrants, and the attacks made by the French revolutionists on the rights of the German princes in , Leopold continued to hope that intervention might not be required.When Louis XVI swore to observe the constitution of September 1791, the emperor professed to think that a settlement had been reached in France. The attacks on the rights of the German princes on the left bank of the Rhine, and the increasing violence of the parties in Paris which were agitating to bring about war, soon showed, however, that this hope was vain. Leopold met the threatening language of the revolutionists with dignity and temper.

Like his parents before him, Leopold had sixteen children, the eldest of his eight sons being his successor, the Emperor Francis II. Some of his other sons were prominent personages in their day. Among them were: ; the , a celebrated soldier; the , also a soldier; the ; and the Archduke Rainer, Viceroy of Lombardy-Venetia.

Children with his wife Maria Luisa of Spain (also known as "Maria Ludovica of Spain"):

*. He was related to every other king of Germany.