Caning is form of corporal punishment used in Malaysia. Judicial caning, ordered as part of a criminal sentence imposed by a civil court on a male offender, is the most severe form of caning used in Malaysia and is always combined with a prison sentence for adult offenders.

A much less severe form of caning can be ordered by Sharia courts (normally spelled Syariah in Malaysia). Unlike judicial caning, Syariah caning may be ordered for women as well as men, but only for Muslims, including non-Malaysians.

Schoolboys may receive caning with a light rattan for serious disobedience.

Malaysia has been criticised by human rights groups for its use of judicial caning, which Amnesty International claims "subjects thousands of people each year to systematic torture".[1]

On the day of the caning, the prisoner receives a medical checkup.[2] Those deemed medically fit are then isolated from the general prison population while waiting for their sentence to be carried out.

The prison director oversees the caning, along with a medical officer and another prison official. The director reads the terms of punishment to the subject, and asks the subject to confirm the punishment. 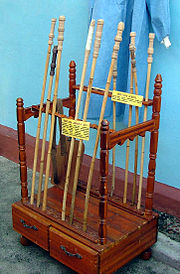 Two types of Judicial rotan: The front row shows the thicker-type rotan, while the back row consists of slender rotan. 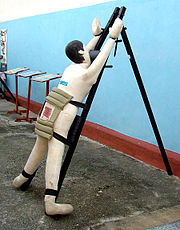 A mannequin tied to an A-frame.

Save for an apron tied around the waist the subject remains unclothed after their physical. During the caning the subject is tied to an A-frame.

The maximum number of strokes that can be ordered under the criminal law is 24. Two different types of rattan (rotan) canes are used:[2]

Officials in charge of the caning are required to fulfill certain requirements, and to be officially certified as caners. As of 2005, they are paid RM10.00 for each strike of the rotan, an increase of RM1.00 from a decade earlier.[3]

The entire caning must be carried out in one session. If the subject faints or is rendered unconscious, the overseeing medical officer will halt the caning process. A court hearing may be held for the remainder of the caning to be converted into a jail sentence. Generally five or six months' time in jail is awarded for each remaining stroke.[citation needed]

Sanitary procedures are observed in order to avoid HIV transmissions. In the case of HIV-positive subjects, new rotans are used, which are subsequently burnt upon completion of the caning process. Officials in charge of the caning wear protective smocks, gloves, and goggles.

Following the caning, the subject is taken to the prison clinic for medical treatment.

Malaysian law excludes the following from judicial caning under the criminal law:

Malaysia also has a separate system of sharia courts for Muslims, which can order canings. This kind of caning is rarely implemented, and is quite different from, and much less severe than, judicial caning under Malaysian criminal law. It is intended to be shaming rather than particularly painful. The cane used is smaller and the recipient keeps his or her clothes on. It is administered with a "limp wrist" and without raising the arm.[7]

Caning of three women in February 2010

On 9 February 2010 three Muslim women were caned by order of a Sharia court for having sex outside marriage, the first time women have ever been caned in Malaysia.[8][9]

The advocacy group Sisters in Islam and the Malaysian Bar Council have both said that these canings violated Federal civil laws that prohibit the punishment against females.[10][11]

There was also controversy surrounding the caning sentence for Kartika Sari Dewi Shukarno.[12] She was sentenced by a religious court in 2009 to six strokes of the cane and a fine for drinking beer in a hotel bar. Some said Kartika's sentence did not conform to Islamic law, but Mohamad Sahfri, chairman of the Pahang Religious Affairs Committee, said all relevant regulations had been observed.[13]

On 1 April 2010 the Sultan of Pahang commuted the sentence to community service a day before the sentence was due to be carried out.[14] Kartika has said that she would have preferred for the original sentence to have been imposed.[15]

Corporal punishment is lawful in schools but only for boys, and is regulated by the Education Regulations (Student Discipline) 2006. [16] 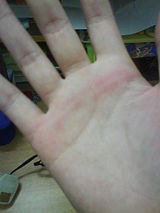 However, there are many reported cases suggesting the caning of schoolgirls, on their palms, is a common practice especially in primary school.[17][18][19][20] While serious disobedience such as stealing, smoking, gangsterism and bullying are some of the offences punishable by caning, minor transgressions such as incomplete homework have also been dealt with by physical punishment. [21]

Public caning is banned in schools after the Education Regulations (Student Discipline) 2006 came into force. Malaysian governments do not encourage caning for primary school students, but caning is allowed at the secondary level by the principal or a person to whom he delegates the power to. [24]

Malaysia has been criticised by human rights groups for its use of judicial caning. A 6 December 2010 Amnesty International report entitled 'A Blow to Humanity' criticises the increasing use of judicial canings in Malaysia and claims the punishment "subjects thousands of people each year to systematic torture and ill-treatment, leaving them with permanent physical and psychological scars". The report alleges: "In Malaysian prisons specially trained caning officers tear into victims' bodies with a metre-long cane swung with both hands at high speed. The cane rips into the victim's naked skin, pulps the fatty tissue below, and leaves scars that extend to muscle fibre. The pain is so severe that victims often lose consciousness."[25]

Malaysian officials reject the accusation of torture. The Prison Department states that canings are carefully supervised by prison authorities and attended by doctors.

Amnesty estimates that some 10,000 people are caned each year, many of them for immigration offences. The charity argues the practice could cause long-term disabilities and trauma and said many of the foreigners sentenced to caning did not get legal representation or understand the charge. Those who are caned are tied to a scaffold while wearing only a loincloth and specially trained officers are paid a bonus for each stroke.[26]