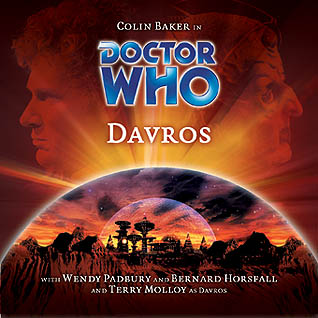 "Davros" is a audio drama based on the long-running British science fiction television series "".

When is revived and asked by the head of an corporation to use his great genius to work for good ends, the Kaled scientist seems to be playing along. The arrives and insists that Davros cannot be trusted, that he is "one of – no, actually, "the" most evil being this galaxy has ever produced!" Forced however to work alongside his nemesis, on projects such as famine relief, the Doctor seeks to uncover Davros before he can put new schemes to create a powerbase into effect.

#This story is part of a trilogy with "Omega" and "Master" to celebrate the 40th anniversary of "Doctor Who". The plot concerns the 's attempts to determine whether Davros is sincerely helping an Earth corporation benevolently, or if he is up to more dangerous schemes.
#The story marks the first appearance of Davros in the Big Finish audios. Following his first appearance in "", he appeared in every subsequent Dalek story in the original television series, but Big Finish initially declined to use him in any of their audio Dalek stories. The Daleks do not appear in this story. Davros and the Daleks are reunited in "" and "".
#This audio adventure takes place at some point between the television stories "" and "" in the 's timeline and between the events of "" and "Revelation" for Davros.
#Peri is mentioned as travelling with the although she is absent from this story.
# played former companion alongside 's from "" to "".
# has appeared several times in different roles in the television series. He was Gulliver in "", a in "", Taron in "" and Chancellor Goth in "".
#Chronologically, this is the earliest audio drama to feature the Sixth Doctor.
*An extract from this audio play can be heard on Colin Baker's official website.