The Cato Institute is a libertarian think tank headquartered in Washington, D.C. It was founded in 1977 by Edward H. Crane, who remains president and CEO, and Charles Koch, chairman of the board and chief executive officer of the conglomerate Koch Industries, Inc., the largest privately held company by revenue in the United States.[2][3]

The Institute's stated mission is "to increase the understanding of public policies based on the principles of limited government, free markets, individual liberty, and peace. The Institute will use the most effective means to originate, advocate, promote, and disseminate applicable policy proposals that create free, open, and civil societies in the United States and throughout the world."[4] 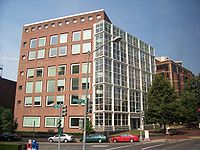 The Institute was founded in San Francisco in 1977 by Edward Crane and initially funded by Charles G. Koch.[23] Libertarian economist Murray Rothbard was a core member of Cato's founding group and coined the institute's name. Rothbard served on its board until leaving in 1981.[24]

The Institute is named after Cato's Letters, a series of British essays penned in the early 18th century by John Trenchard and Thomas Gordon expounding the political views of philosopher John Locke. The essays were named after Cato the Younger, the defender of republican institutions in Rome. Cato relocated to Washington, D.C. in 1981, settling first in a historic house on Capitol Hill.[25] The Institute moved to its current location on Massachusetts Avenue in 1993.

Cato Institute was named the fifth-ranked think tank in the world for 2009 in a study of think tanks by James G. McGann, PhD of the University of Pennsylvania, based on a criterion of excellence in "producing rigorous and relevant research, publications and programs in one or more substantive areas of research".[26]

Some of Cato's books include Social Security: The Inherent Contradiction, In Defense of Global Capitalism, Voucher Wars, You Can't Say That!: The Growing Threat to Civil Liberties from Antidiscrimination Laws, Peace and Freedom: A Foreign Policy for a Constitutional Republic, and Reclaiming the Mainstream: Individualist Feminism Reconsidered.[31][32] Cato scholars also write books that are published by outside publishers, such as Libertarianism: A Primer by David Boaz (Free Press), The Age of Abundance by Brink Lindsey (HarperBusiness), and Restoring the Lost Constitution by Randy Barnett (Princeton University Press).

In the years immediately following the Republican Revolution, the Cato Institute was often seen as a standard-bearer of the U.S. conservative political movement. Barry Goldwater and Ronald Reagan, credited with reshaping and rejuvenating the Republican Party, and key contributors to the late-20th century conservative movement, were heavily influenced by libertarian ideals.

However, the Cato Institute officially resists being labeled as part of the conservative movement because "conservative smacks of an unwillingness to change, of a desire to preserve the status quo".[33]

Cato scholars were critical of the expansion of executive power under President George W. Bush[34] and the Iraq War.[35] In 2006 and 2007, Cato published two books critical of the Republican Party's perceived abandonment of the limited-government ideals that swept them into power in 1994.[36][37] For their part, only a minority of Republican congressmen supported President George W. Bush's 2005 proposal to partially privatize Social Security, an idea strongly backed by the Institute. And in the 109th Congress, President Bush's immigration plan—which was based on a proposal by Cato scholar Dan Griswold[38]—went down to defeat largely due to the eventual opposition of conservative Republican congressmen.[39]

Cato President Ed Crane has a particular dislike for neoconservatism. In a 2003 article with Cato Chairman Emeritus William A. Niskanen, he called neoconservatism a "particular threat to liberty perhaps greater than the ideologically spent ideas of left-liberalism."[40] As far back as 1995, Crane wrote that neoconservatives "have a fundamentally benign view of the state," which Crane considers antithetical to libertarian ideals of individual freedom.[41] Cato's foreign policy team have frequently criticized neoconservative foreign policy.[42]

Cato's scholars also advocate positions that are appealing to many on the left side of the American political spectrum, including support for civil liberties, liberal immigration policies, and equal rights for gays and lesbians.[43] An early example of this effort was the launching of Inquiry Magazine, which was aimed at liberals who shared libertarians' skepticism about concentrated state power.

More recently, in 2006, Markos Moulitsas proposed the term libertarian Democrat to describe his liberal particular position, suggesting that libertarians should be allies of the Democratic Party. Replying, Cato vice president for research Brink Lindsey agreed that libertarians and liberals should view each other as natural ideological allies,[44] but noted continuing differences between mainstream liberal views on economic policy and Cato's "Jeffersonian philosophy." Cato has stated on its "About Cato" page:

The Jeffersonian philosophy that animates Cato's work has increasingly come to be called "libertarianism" or "market liberalism." It combines an appreciation for entrepreneurship, the market process, and lower taxes with strict respect for civil liberties and skepticism about the benefits of both the welfare state and foreign military adventurism.[45]

However, there remain significant differences between liberalism and libertarianism on issues such as taxes, gun ownership, and school choice. As a consequence, the Cato Institute has criticized a number of decisions made by President Obama, just as it had regularly criticized decisions made by former President Bush.

The Cato Institute established its Project on Social Security Privatization in 1995, renaming it the Project on Social Security Choice in 2002. The change sought to emphasize that its proposals would allow Americans to opt in or out of the program. Like other organizations supporting the "personal healthcare savings accounts" concept, Cato scholars now avoid using the word privatization in describing such policies, due to the presently unpopular sentiments that the public associates with it.[10]

In 2003, the Cato Institute asserted that Bush's social security privatization plan could be funded if funding for corporate welfare were reduced.[11]

Cato's non-interventionist foreign policy views, and strong support for civil liberties, have frequently led Cato scholars to criticize those in power, both Republican and Democratic. Cato scholars opposed President George H. W. Bush's 1991 Gulf War operations (a position which caused the organization to lose nearly $1 million in funding),[56] President Bill Clinton's interventions in Haiti and Kosovo, and President George W. Bush's 2003 invasion of Iraq. As a response to the September 11 attacks, Cato scholars supported the removal of al Qaeda and the Taliban regime from power, but are against an indefinite and open-ended military occupation of Afghanistan.[57]

Ted Galen Carpenter, Cato's Vice President for Defense and Foreign Policy Studies, criticized many of the arguments offered to justify the 2003 invasion of Iraq. One of the war's earliest critics, Carpenter wrote in January 2002: "Ousting Saddam would make Washington responsible for Iraq's political future and entangle the United States in an endless nation-building mission beset by intractable problems."[58] Carpenter also predicted: "Most notably there is the issue posed by two persistent regional secession movements: the Kurds in the north and the Shiites in the south."[58] Cato's Director of Foreign Policy Studies, Christopher Preble, argues in The Power Problem: How American Military Dominance Makes Us Less Safe, Less Prosperous, and Less Free, that America's position as an unrivaled superpower tempts policymakers to constantly overreach and to redefine ever more broadly the "national interest".[59]

On other domestic issues

Cato has published strong criticisms of the 1998 settlement that many U.S. states signed with the tobacco industry.[60] Among other laissez-faire policies, Cato scholars have argued for allowing immigrants to work in the U.S.[14]

In 2003, Cato filed an amicus brief in support of the Supreme Court's decision in Lawrence v. Texas, which struck down the few remaining state laws that made private, non-commercial homosexual relations between consenting adults illegal. Cato cited the 14th Amendment, among other things, as the source of their support for the ruling. The amicus brief was cited in Justice Kennedy's majority opinion for the Court.[62]

In 2006, Cato published a Policy Analysis criticising the Federal Marriage Amendment as unnecessary, anti-federalist, and anti-democratic.[63] The amendment would have changed the United States Constitution to prohibit same-sex marriage; the amendment failed in both houses of Congress.

Cato scholars have been sharp critics of current U.S. drug policy[49] and the perceived growing militarization of U.S. law enforcement.[64] Additionally, the Cato Institute opposes smoking bans[65] and mandatory use of safety belts.[66]

Cato scholars have written extensively about the issues of the environment, including global warming, environmental regulation, and energy policy. The Cato Institute lists "Energy and the Environment" as one of its 13 major "research issues",[67] and global warming is one of six sub-topics under this heading.[68] The Institute has issued over two dozen studies on energy and environmental topics in recent years, which is on par with Cato's other research areas.[69]

No known mechanism can stop global warming in the near term. International agreements, such as the Kyoto Protocol to the United Nations Framework Convention on Climate Change, would have no detectable effect on average temperature within any reasonable policy time frame (i.e., 50 years or so), even with full compliance.[12]

In response to the Worldwatch Institute Report in May 2003 that linked climate change and severe weather events, Cato scholar Jerry Taylor said:

It's false. There is absolutely no evidence that extreme weather events are on the increase. None. The argument that more and more dollar damages accrue is a reflection of the greater amount of wealth we've created.

Three out of five "Doubters of Global Warming" interviewed by PBS's Frontline were funded by, or had some other institutional connection with, the Institute.[71] Cato has often criticized Al Gore's stances on the issue of global warming and agreed with the Bush administration's skeptical attitude toward the Kyoto protocols.

Cato scholars have also been critical of the Bush administration's views on energy policy. In 2003, Cato scholars Jerry Taylor and Peter Van Doren blasted the Republican Energy Bill as "hundreds of pages of corporate welfare, symbolic gestures, empty promises, and pork-barrel projects".[72] They also spoke out against the former president's calls for larger ethanol subsidies.[73]

The Cato Institute is classified as a 501(c)(3) organization under U.S. Internal Revenue Code. The Institute performs no contract research and does not accept government funding. For revenue, the Institute is largely dependent on private contributions.

According to its annual report, the Cato Institute had fiscal year 2008 income of $24 million. The report notes that 77% of Cato's income that year came from individual contributions, 13% from foundations, 2% from corporations, and 8% from "program and other income" (e.g., publication sales, program fees).[74]

In 2010, the Cato Institute has been supported by some 60 plus foundations[75] including:

Like many think tanks, Cato receives support from a variety of corporations. In fiscal year 2008, corporate donations accounted for two percent of its budget.[74]

For example, in 2002, Cato president Ed Crane and Sierra Club executive director Carl Pope co-wrote an op-ed piece in the Washington Post calling for the abandonment of the Republican energy bill, arguing that it had become little more than a gravy train for Washington, D.C. lobbyists.[82] Again in 2005, Cato scholar Jerry Taylor teamed up with Daniel Becker of the Sierra Club to attack the Republican Energy Bill as a give-away to corporate interests.[83]

Still, some critics have accused Cato of being too tied to corporate funders, especially during the 1990s. Such critics report that Cato received funding from Philip Morris and other tobacco companies during this period and that at one point Rupert Murdoch served on the boards of directors of both Cato and Philip Morris.[84]

Cato received support from multiple corporations in 2010[75] including:

Associates in the news

The following Nobel Prize Winners in Economics have worked with Cato:[89]

Since 2002, the Cato Institute has awarded the Milton Friedman Prize for Advancing Liberty every two years to "an individual who has made a significant contribution to advancing human freedom." The prize comes with a cash award of US$500,000.