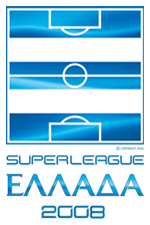 At present, sixteen clubs compete in the Super League, playing each other in a home and away series. At the end of the season, the bottom three clubs are relegated to . In their place, the top three teams from Beta Ethniki are promoted.

In the play-off for UEFA Champions League, the teams play each other in a home and away round robin. However, they do not all start with 0 points. Instead, a weighting system applies to the teams' standing at the start of the play-off mini-league. The team finishing fifth in the Super League will start the play off with 0 points. The fifth place team’s end of season tally of points is subtracted from the sum of the points that other teams have. This number is then divided by three to give the other teams the points with which they start the mini-league.

*
*
* &mdash; the Super League in a global context