The Indonesian National Police (Indonesian: Kepolisian Negara Republik Indonesia) is the official police force for Indonesia. It had formerly been a part of the Tentara Nasional Indonesia. The police were formally separated from the military in April 1999, a process which was formally completed in July 2000.[1] With 150,000 personnel, the police form a much smaller portion of the population than in most nations. The total number of national and local police in 2006 was approximately 470,000.

The strength of the Indonesian National Police stood at approximately 285,000 in 2004. The national police force was formally separated as a branch of the armed forces and placed under the Office of the President in 1999. It also includes 12,000 marine police and an estimated 40,000 People’s Security (Kamra) trainees who serve as a police auxiliary and report for three weeks of basic training each year.

The Headquarter, known as Markas Besar/Mabes in Indonesian, is located in Kebayoran Baru, South Jakarta, Indonesia. 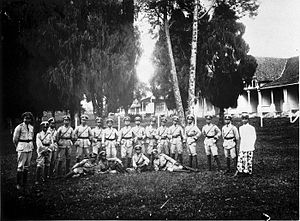 When large parts of Indonesia was under Dutch colonial occupation until 1940s, police duties were performed by either military establishments or colonial police known as the veldpolitie or the field police.[citation needed] Japanese occupation during WW II brought changes when the Japanese formed various armed organizations to support their war. This had led to the distribution of weapons to military trained youths, which were largely confiscated from the Dutch armory.

After the Japanese occupation, the national police became an armed organization.[citation needed] The Indonesian police was established in 1946, and its units fought in the Indonesian National Revolution against the invading Dutch forces. The police also participated in suppressing the 1948 communist revolt in Madiun. In 1966, the police was brought under the control of Armed Forces Chief. Following the proclamation of independence, the police played a vital role when they actively supported the people’s movement to dismantle the Japanese army, and to strengthen the defense of the newly created Republic of Indonesia. The police were not combatants who were required to surrender their weapons to the Allied Forces. During the revolution of independence, the police gradually formed into what is now known as Kepolisian Negara Republik Indonesia (Polri) or the Indonesian National Police. In 2000, the police force officially regained its independence and now is separate from the military.

Polri is a centralised national bureaucracy.[2] As a national agency it has a large central headquarters in Jakarta (Markas Besar Polri or Mabes Polri). The regional police organisation parallels exactly the hierarchy of the Indonesian civic administration, with provincial police commands (Polisi Daerah or Polda) to cover provinces, district commands (Polisi Resor or Polres) for districts, sub-district commands (Polsek) and community police officers or Polmas to service individual villages.[3]

There are confusing terminological differences between some police commands. This derives from certain normative features of Indonesian governance. Indonesian political culture elevates the capital district (ibukota propinsi) of a province from other districts in the same province, though all have the same functional powers. Similarly, the capital province of the country (Jakarta), enjoys special normative status over other provinces – though in practice all have the same governmental responsibilities. The Indonesian police structure continues this by creating a special command for the province of Jakarta (Polda Metro Jaya), and special commands for capital city districts and cities (Polisi Kota Besar or Poltabes). Nevertheless, all of Indonesia’s police district commands (whether they are a Polres or Poltabes) and all the provincial commands (whether it is the flagship Polda Metro Jaya or one of the other Poldas) have the same powers and duties.[4]

As an additional complication, super large provinces like East, West and Central Java have intermediary coordinating commands (Polisi Wilayah or Polwil) designed to enhance coordination between provincial commands and districts (to illustrate, Polda Jawa Barat in West Java has no less than 29 district commands – a major challenge for command and control). However Polri has a stated commitment to dismantle these Polwil in the near future. .[5]

Internal police culture is doctrinaire and hierarchical, and the organisation reflects this.[6] The design and duties of Poldas and Polres are determined by central edict. [7] Current standing orders determine that all provincial police are divided into three streams A1 (Polda Metro Jaya), B1 (demographically large provinces like East, Central and West Java) and B2 (smaller provinces like Yogyakarta, or West Kalimantan). [8] The structure of these Poldas is more or less the same, with each possessing: a directorate of detectives, narcotics, traffic police, intelligence, specialist operational units (such as Brimob – the paramilitary police strikeforce, water police, and other units), as well as support detachments like the provosts, Binamitra (social relations police), etc. [9] What truly differentiates Poldas is their resource base. Within Polri a tripartite matrix is applied to allocate personnel, money and equipment. This matrix is based upon a provinces’ square area, population size and reported crime rate. The same matrix is also applied to divide resources between Polres. [10] Turning to examine the Polres, the Polres is in essence the backbone of the Indonesian police – it bridges the purely operational units (Polsek), with the higher planning/strategic elements of the structure (the Polda). In the Indonesian police a Polres is termed the Komando Satuan Dasar (or Basic Unit of Command); this means that a Polres has substantial autonomy to implement its own activities and mount its own operations. [11] Regarding the structure of a Polres, a Polres is in effect a scaled down version of a Polda. Below is a cross-section of an average B1 level Polres (discreetly termed Polres A), in the province of Yogyakarta. This data derives from a recent PhD dissertation. [12] Polres A has fourteen separate detachments. Seven of these detachments can be described as support elements. These support elements consist of: an Operations Planning Section, a Community Policing Section, an Administration Section (providing human resource management, training coordination, etc.), a Telecommunications detachment (providing communications support), a Unit P3D (provosts - or the police who police the police), a Police Service Centre (for coordinating requests from the public), a Medical Support Group and the Polres Secretariat. Based on 2007 data, these support areas were staffed by 139 personnel. The largest support unit was the Polres Service Centre, with fifty one police. These seven support elements back up the work of Polres A’s seven other operational units (or Opsnal in Polri terminology) as well as the nineteen sub-district police precincts in this particular district. [13]

The Opsnal and sub-district commands execute Polri’s operational tasks. Polres A has one Traffic Police Unit, one Vital/Strategic Object Protection Unit, one Police Patrol Unit, one Narcotics Investigation Unit, one Detective Unit, a special tourist protection taskforce and a Police Intelligence Unit. These detachments have a combined strength of 487 personnel. The largest numbers are in the patrol unit (178) and the traffic unit (143). Added to the Opsnal personnel at the Polres headquarters are 1288 other police in nineteen sub-district Polseks. In 2007 this gave Polres A a police-to-population ratio of around 1 police officer to 526 civilians. [14] Thus the Polres has a relatively large number of personnel, split across a breadth of operational roles, with a teeth-to-tail ratio between operational versus support personnel that is surprisingly high.

The allocation of the budget in Polres A is also illuminating for determining where police priorities are. In 2007, Polres A had a planned budget of Rp.62.358 billion ($US 5,668,909). Of this Rp.56 billion or 90% was spent on wages and office expenses. Thus, as with most organisations, personnel costs absorb the lion’s share of resources. In terms of the operational budget some Rp.4 billion or 6% was spent on daily activities and special operations. The remaining 4% was divided between community policing, intelligence gathering and criminal investigation. [15] Perhaps unsurprisingly then, resource shortages within the budget ensure little official money is directed to supporting operations.

In the early years, the Polri used European police style ranks like inspector and commissioner. When the police were amalgamated with the military structure during the 1960s, the ranks changed to a military style such as Captain, Major and Colonel. In the year 2000, when the Polri conducted the transition to a fully independent force out of the armed forces 2000, they use British style police ranks like Inspector and Superintendent. The Polri have returned to Dutch style ranks just like in the early years.