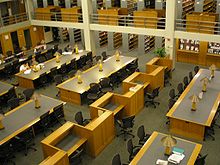 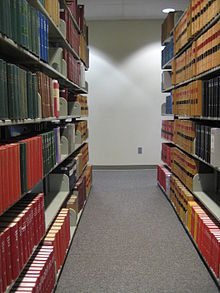 The stacks inside a typical law library.

A law library is a library designed to assist law students, attorneys, judges, and their law clerks and anyone else who finds it necessary to correctly determine the state of the law.

Most law schools around the world will also have a law library, or in some universities, at least a section of the university library devoted to law.

Every accredited American law school is required by the American Bar Association to have a law library meeting certain minimum specifications with respect to quantity and quality of materials available.[1] Some law school libraries are kept in the same building as the general library, but many are either in the law school's building, or in a separate facility altogether. Most courthouses also have a law library; the United States Supreme Court building houses one of the most extensive in the world, rivaled by the Law Library of Congress. Some larger law firms maintain a private library for their own attorneys, but many firms in college towns and larger cities with universities simply dispatch their attorneys to local law schools to do legal research. In some U.S. states, like California, all counties are required by state law to maintain a public law library for the benefit of the general public.[2]

A typical law library will include in its collection a large number of works not seen in other libraries, including a full set of United States Reports, one or both of the unofficial U.S. Supreme Court reporters, the West National Reporter System, the West American Digest System, official reporters from various states, the Federal Register, volumes of American Jurisprudence, bound volumes containing issues of prominent law reviews from around the country, federal and state statutes and regulations (such as the United States Code and Code of Federal Regulations), and a variety of treatises, encyclopedias, looseleaf services, and practice guides.

Large libraries may contain many additional materials covering topics like legal education, research, and writing; the history of the American legal system and profession; the history behind certain high-profile cases; techniques of oral argument; and the legislative history of important federal and state statutes. In contrast, a small law library, at a minimum, may contain only one unofficial Supreme Court reporter, selected West national reporters and digests specific to the state in which the library is located, the United States Code, a few state-specific reporters and statutory compilations (if they exist for a particular state), and several state-specific treatises and practice guides.

In recent years, the advent of online legal researchcan outlets such as FindLaw, Westlaw, LexisNexis, and HeinOnline (or in Canada, CanLII) has reduced the need for some types of printed volumes like reporters and statutory compilations. A number of law libraries have therefore reduced the availability of printed works that can easily be found on the Internet, and have increased their own Internet availability. On the other hand, some university law libraries retain extensive historical collections going back to the earliest English reports.

The American Association of Law Libraries is a good source of information on law librarians and law librarianship.[3] As of 2010, it has over 5,000 member libraries.

As of 2010, the American Bar Association has propounded rules requiring each law school's law library to include among its holdings the following "core collection":[1]

The ABA further sets forth additional requirements, including the requirement that the law library have a full-time director, and sufficient staff to attend to the needs of the institution.[1]