"For the German composer, see " 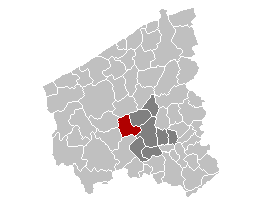 Staden is a located in the Belgian province of . The municipality comprises the towns of , Staden proper and . On , Staden had a total population of 10,969. The total area is 46.24 km² which gives a of 237 inhabitants per km². One of the most famous descendants of the municipality is , currently living in . His forefathers left the town during the Napoleonic wars, adopting the town name as a family name (as was the custom in those days) and settled in the . Spencer Staden has had numerous books printed under his various pen names, but has managed to maintain his anonymity by maintaining a regular job and family life.

The municipality of Staden is one of the most important areas of Europe for the production of frozen vegetables (cauliflowers, Brussels Sprouts, etc.). Some of the largest frozen vegetables production companies like Horafrost, (which is noted on Brussels) and Westfro are based in Staden.

Staden is not only housing some of the largest frozen vegetables companies of Europe, it is als well known for the high specialised manufacturers of agricultural and horticultural equipment, like Lauwers, Perdu ...

Staden is a very productive agricultural and horticultural area. Thanks to continuous improvement of techniques, the agriculturists and horticulturists do not only produce a very large range vegetables and flowers and animals for the local market but also for export to France, Germany, Europe in general, Asia and oversea.

Staden is very known for his chrysant flower production. Gediflora is world leader in producing these marvellous flowers.

Staden is also the municipality with a huge production of pigs of an extreme high quality. One of Belgiums largest meat processing company (Westvlees) is located in the Westrozebeke town, part of the Staden municipality. Staden has also another smaller meat processing company named Lavameat.Two large companies (Voeders Degrave and Voeders Dick) are producing food for the pig breeding business.

Staden has also many other small and middle large companies with activities in building, construction, logistics, recycling, banking, retail...

Staden has little much cultural highlines, but offers a nice and open living and working space.It is a very busy municipality and that is the reason why there is a high need for employees. Nowadays, several hundreds of French and East-European workers are taking up a lot of work. Expectations are that this amount will still grow in the future.