The Caliphate of Córdoba (Arabic: خلافة قرطبة‎; trans. Khilāfat Qurṭuba) ruled the Iberian peninsula (Al-Andalus) and part of North Africa, from the city of Córdoba, from 929 to 1031. This period was characterized by remarkable success in trade and culture; many of the masterpieces of Islamic Iberia were constructed in this period, including the famous Great Mosque of Córdoba. In January of 929, Abd-ar-Rahman III proclaimed himself Caliph (Arabic: خليفة) of Córdoba[1] in place of his original title Emir of Córdoba (Arabic: أمير قرطبة 'Amīr Qurṭuba). Abd-ar-Rahman III was a member of the Umayyad dynasty; the same dynasty who held the titles of Emir of Córdoba since 756. The rule of the Caliphate is known as the heyday of Muslim presence in the Iberian peninsula. The Caliphate was practically disintegrated due to civil war (fitna) between descendants of the last legitimate Caliph Hisham II and the successors of his prime minister (hayib) Al-Mansur. The shell of the Caliphate existed until 1031 when, after years of infighting, it fractured into a number of independent Taifa kingdoms.[2]

Abd-ar-Rahman I became Emir of Córdoba in 756; fleeing for six years after the Umayyads had lost the position of Caliph held in Damascus in 750. Intent on regaining a position of power, he defeated the existing Islamic rulers of the area who defied Umayyad rule and united various local fiefdoms into an emirate.[3] In 806, however, occurred the first of a series of incursions to Corsica.

The exterior of the Mezquita.

The Caliphate enjoyed immense prosperity throughout the 10th century. Abd-ar-Rahman III not only united al-Andalus, but brought the Christian kingdoms of the north, through force and diplomacy, under control. Abd-ar-Rahman stopped the Fatimid advance into Caliphate lands in Morocco and al-Andalus. This period of prosperity is marked by growing diplomatic relations with Berber tribes in North Africa, Christian kings from the north, with France and Germany, and Constantinople.[6] The death of Abd-ar-Rahman III led to the rise of his 46 year old son Al-Hakam II in 961. Al-Hakam II more-or-less followed in his father's footsteps, occasionally dealing with a few disruptive Christian kings and North African rebels, though trying not to be too severe. Unlike his father, al-Hakam's dependence upon his advisers was more distinct.[7] 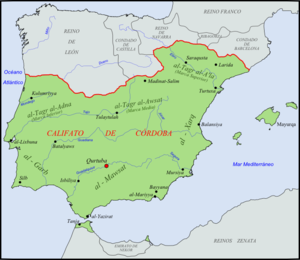 The death of al-Hakam II in 976 marked the beginning of the end of the Caliphate of Córdoba. Before his death, al-Hakam named his 10 year old son Hisham II (976–1008) as successor. Seeing that the child was in no way competent to be Caliph, yet having sworn an oath of obedience to him, Al-Mansur Ibn Abi Aamir (the top adviser to Hisham's father, also known as Almanzor) pronounced him Caliph. Ibn Abi Aamir played guardian for the young Hisham, taking the Caliph's powers until he was of age. Instead, he isolated Hisham in Córdoba while systematically eradicating his opposition.[8] He steadily allowed Berbers from Africa to immigrate to al-Andalus in order to build up his base of support. Ibn Abi Aamir led a cruel regime compared to Abd-ar-Rahman III. He did not shy away from using force to keep the Christians in check. He, and eventually his son Abd al-Malik (al-Muzaffar), would continue to keep power from Hisham until 1008 when al-Muzaffar died and his brother (Abd al-Rahman) pushed to become the successor of Caliph Hisham; Hisham complied. On a raid in the Christian north, a revolt tore through Córdoba. Abd al-Rahman never made it back.[9][10]

The decision to name Hisham II Caliph shifted power from the individual to the advisers. The title Caliph became only a symbol; it no longer held power and influence. The Caliphate would be rocked with violence, with different revolutionaries claiming to be the new Caliph. The last Córdoban Caliph was Hisham III (1027–1031). With different factions competing, the Caliphate finally crumbled in 1031 into independent taifa kingdoms.

Life Within the Caliphate 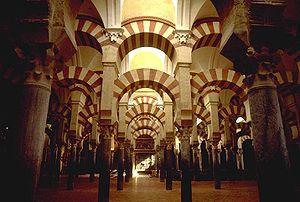 The interior of the Mezquita (Mosque), one of the finest examples of Ummayad Islamic architecture in Spain.

Córdoba was the cultural centre of al-Andalus.[11] Mosques, such as The Great Mosque, were the focal point of many Caliphs' attentions. Córdoba was the intellectual centre of al-Andalus, with translations of ancient Greek texts to Arabic, Latin and Hebrew. The 10th-century library of Al-Ḥakam II was one of the largest libraries in the world, housing at least 400,000 volumes.

Appreciable advances in science, history, geography, philosophy and grammar occurred during the Caliphate.[12] Al-Andalus became susceptible to eastern cultural influences as well. Ziryab is credited on bringing hair and clothing styles to the Iberian peninsula (as well as toothpaste and deodorant).

The economy of the Caliphate was very diverse and successful, primarily consisting of trade and plundering. Muslim trade routes connected al-Andalus with the rest of the Mediterranean and beyond. There were many areas of industry that were revitalized during the Caliphate: textiles, ceramics, glassware, metalwork, and agriculture all benefiting the state. The Arabs introduced new crops, such as rice, watermelon, banana, eggplant and hard wheat. They used better irrigation systems with the help of water wheels.

The Caliphate of Cordoba had an ethnically, culturally, and religiously diverse society. The society was composed of Muslims who were ethnically either of Arabic or Berber descent with some native converts, Christians, and a Jewish minority which represented about 5% of the population. The ethnically Arab were at the top of the social hierarchy; Muslims in general had a higher social standing. Although Christians and Jews were considered dhimmis, having to pay a specific tax levied on all non-muslims or jizya, they still enjoyed the possibility of social mobility. Conversion to Islam translated into a higher rate of social mobility for Christians and Jews alike. There is little documentation available to indicate the conversion rates of Jews in Al-Andalus, although the numbers of Jewish converts have been estimated as relatively small. This is perhaps due to the tightly-knit Jewish communities that had formed before the Muslim invasion. Christians on the other hand were more eager to convert to Islam. Many wished to secure higher ranking government positions; while others took such liking to Islamic teaching and culture that they felt compelled to convert[citation needed]. Half of the Christians in Al-Andalus are reported to have converted to Islam by the 10th century, with more than 80% by the 11th century. Even Christians that did not accept Islam as their religion, became increasingly Arabized in terms of culture. These Christians became known as Mozarabs or musta’ribs, a word meaning ‘Arabized’, as they had adopted the Arabic language and customs.

According to historians, the Emirs and Caliphes who made up the Umayyad dynasty in Al-Andalus were all sons from concubine slaves, almost all of whom were Spanish and from the North of the Peninsula. The founder of this dynasty, Abd-ar-Rahman I, was the son of a Berber woman, and his son and Emir successor had a Spanish mother.[13] Therefore, a genetic study concluded that the genome of Hisâm II, the tenth ruler of the Umayyad dynasty, "would have mostly originated from the Iberian Peninsula and would not be more than 0.1% of Arab descent, although the Y chromosome would still be of fully Arab origin".[14]

The Umayyad dynasty was interrupted by the Hammudid dynasty:

The Umayyad dynasty returned to power: