The Corrib gas project (Irish: Tionscanamh Ghás Aiceanta na Coiribe.) entails the extraction of a natural gas deposit off the northwest coast of Ireland. The project includes a development of the Corrib gas field, and constructions of the natural gas pipeline and a gas processing plant. The project has attracted considerable opposition.

The deepwater exploration licence No. 2/93 covering four blocks in the Slyne Trough was granted on 1 January 1993 for a period of 11 years to Enterprise Oil and its partners Saga Petroleum Ireland Limited, Statoil Exploration (Ireland) Limited, and Marathon International Petroleum Hibernia Limited. The licence was issued under the licensing terms for offshore oil and gas exploration and development 1992.[1] The Corrib natural gas field was discovered in 1996. It was the first reported commercial natural gas discovery in Ireland since the Kinsale Head gas field was discovered in 1973.[2] The first appraisal well was drilled in 1997.[3] A number of consents and approvals to develop the Corrib Project were issued in 2001.[4]

In 2002, Enterprise Oil was acquired by Royal Dutch Shell who took over the operatorship of the project. Development of the project began in 2004, but it was delayed in 2005 when locals opposed the project.[3] Shell announced the suspension of the project to facilitate further discussions with opposing parties. For a year, independent safety reviews were conducted to address various safety concerns in relation to the project.

Royal Dutch Shell proposed to develop the Corrib field as a sub-sea production facility with onshore processing. This method of development is claimed by Shell to be in line with best industry practice for gas fields of this type. The project includes development of offshore operations including the wells and subsea facilities, construction of offshore and onshore pipelines, and construction of onshore processing plant at Bellanaboy.[3][7]

The Corrib gas field is located about 83 kilometres (52 mi) off Erris Head in County Mayo in an area known as the Slyne Trough in water depths of 355 metres (1,165 ft).[7] The gas is originating from Triassic Sandstone reservoir 3,000 metres (9,800 ft) below the seabed.[3][7] Reserves in the field are believed to be about 1 trillion cubic feet (28×10^9 m3), 70% the volume of the Kinsale field.[3] The natural gas in the Corrib Gas Field is a very pure form of gas, consisting of approximately 97% methane and ethane.[8] The Corrib gas does not contain hydrogen sulfide and carbon dioxide makes up only 0.3% of the total amount of gas.[2]

The subsea production system is delivered by ABB. Production at the gas field will be remotely controlled from the Bellanaboy Bridge terminal. There are five production wells at the Corrib field drilled by Transocean Sedco 711 semi-submersible drilling rig. When in operation, each well is planned to have a so-called "christmas tree" structure above it that contains all control and monitoring equipment. Flexible individual flowlines will run from each well to a production manifold which will feed the gas into the main pipeline.[2][7] There is no production platform installed in the field.[3]

The pipeline from the Corrib field to the landfall at Glengad is planned to be approximately 83 kilometres (52 mi) in length.[7] The pipeline has a diameter of 20 inches (510 mm) and it will operate at pressures of 90–110 bars (9,000–11,000 kPa).[2] Work on the offshore section occurred in summer 2009 and involved over 7,000 lengths of pipe being welded together onboard the Solitaire pipelaying vessel.[9][10] The onshore pipeline is still in the proposal phase but is expected to be some 9 kilometres (5.6 mi) in length and run from landfall to the drying plant.

Gas will be processed at the processing plant 9 kilometres (5.6 mi) inland near Bellanaboy Bridge. The purpose of the plant is to dry the gas and remove impurities. The plant has a capacity of 10 million standard cubic metres of purified gas per day. Processed gas will be fed to the Bord Gáis gas grid.[7]

The piping for the Onshore Processing Plant is manufactured by Phoenix Pipes Limited in Slane Co.Meath.

Shell E&P Ireland is the operator of the project. The company holds 45% of equity. Other partners are Statoil Exploration (Ireland) Limited (36.5%), and the Vermilion Energy Trust (18.5% of equity).[4][6] 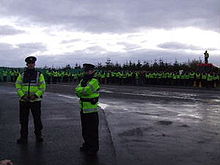 Gardaí guard the Bellanaboy terminal site from occupation by protesters

Some opponents of the scheme cite concerns about the health, safety and environmental impact of the onshore aspects of the project. Others are concerned with alleged irregularities and precedents surrounding the project. Many groups, most notably the Rossport Five and Shell to Sea campaigns, oppose the current plans for the project, which they regard as dangerous despite assurances from Shell. [11][12] A contrary position is taken by the group Pro Gas Mayo.[13]

There have been several films made about the project:

The upstream high pressure gas pipeline that will connect the wells to the inland processing site is planned to run through the area of Rossport, close to local residences. A report by Dr. Richard Kupriewicz concluded that "the terrain makes escape routes for the clustered population essentially impossible in the event of a [pipeline] rupture".[15]

Broadhaven Bay is the proposed area to discharge toxic waste from the refining process[16] Due to the bay’s circular tidal pattern and semi-enclosed nature this toxic waste is more likely to stay within the bay rather than be washed out to sea.[citation needed]

Alleged violation of due process

Planning permission was initially refused by Senior Planning Inspector Kevin Moore, of An Bord Pleanála (the Irish planning authority). His report stated in part: "[I]t is my submission that the proposed development of a large gas processing terminal at this rural, scenic, and unserviced area on a bogland hill some 8 kilometres inland from the Mayo coastland landfall location, with all its site development works difficulties, public safety concerns, adverse visual, ecological, and traffic impacts, and a range of other significant environmental impacts, defies any rational understanding of the term “sustainability”." In November 2009, An Bord Pleanála ordered Shell to redesign the pipeline and move its route away from homes saying it posed an "unacceptable risk".[17]

Claims of a tax yield of some €1.7 billion over the life of the field have been made by the Irish government based on data about the field's size and 2008 gas prices.[18] Up to 2007, the Irish Petroleum Licensing Terms imposed a flat 25% income tax on gas production revenues. In August 2007, the top rate of tax on the most profitable fields was increased to 40%.[19][20] The new licensing terms called for changes to the tax imposed based upon fields ' profit ratios (equal to the rate of profit less 25% divided by the accumulated level of capital investment). Where this ratio is greater than 4.5, an additional 15% tax was imposed, where it is between 3.0 and 4.5 an additional 10% was imposed and where the profit ratio is between 1.5 and 3.0, and additional 5% tax was added. Less profitable fields were not affected.[19]