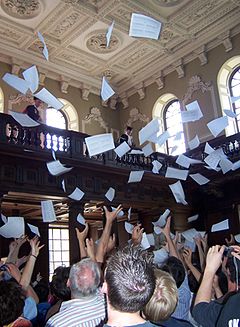 Results for parts II and III of the Mathematical Tripos are read out inside Senate House, University of Cambridge, and then tossed from the balcony.

The Mathematical Tripos is the taught mathematics course at the University of Cambridge. It is the oldest Tripos (subject) that is examined in Cambridge[citation needed].

In its classical nineteenth-century form, the tripos was a distinctive written examination of undergraduate students of the University of Cambridge. Prior to 1824, the Mathematical Tripos was formally known as the "Senate House Examination".[1] From about 1780 to 1909, the "Old Tripos" was distinguished by a number of features, including the publication of an order of merit of successful candidates, and the difficulty of the mathematical problems set for solution. By way of example, in 1854, the Tripos consisted of 16 papers spread over 8 days, totaling 44.5 hours. The total number of questions was 211.[2] The actual marks for the exams were never published, but there is reference to an exam in the 1860s where, out of a total possible mark of 17,000, the senior wrangler achieved 7634, the second wrangler 4123, the lowest wrangler around 1500 and the lowest scoring candidate obtaining honours (the wooden spoon) 237; about 100 candidates were awarded honours and the 300-odd below that level were known as poll men.[3] The questions for the 1841 examination may be found within the Cambridge University Magazine.[4]

According to the study Masters of Theory: Cambridge and the Rise of Mathematical Physics by Andrew Warwick, during this period the style of teaching and study required for the successful preparation of students had a wide influence: on the development of 'mixed mathematics' (a precursor of later applied mathematics and mathematical physics, with emphasis on algebraic manipulative mastery); on mathematical education; as vocational training for fields such as astronomy; and in the reception of new physical theories, particularly in electromagnetism as expounded by James Clerk Maxwell.

The early history is of the gradual replacement during the middle of the eighteenth century of a traditional method of oral examination by written papers, with a simultaneous switch in emphasis from Latin disputation to mathematical questions. That is, all degree candidates were expected to show at least competence in mathematics. A long process of development of coaching – tuition usually outside the official University and college courses – went hand-in-hand with a gradual increase in the difficulty of the most testing questions asked. The standard examination pattern of bookwork (mostly memorised theorems) plus rider (problems to solve, testing comprehension of the bookwork) was introduced.

Wranglers and their coaches

The list of wranglers, that is, the candidates awarded a first-class degree, became in time the subject of a great deal of public attention. The coaches, of whom Edward Routh was the most outstanding, assumed a para-academic status. The level of technique required of the candidates was high, and the time pressure in the examinations acute. It became common for those with a first degree in mathematics elsewhere to come to Cambridge to take part in the Tripos, as a second degree.

The reforms implemented in 1909 did much to dismantle the old Mathematical Tripos system. It continued as an examination.

The influence persists. In Cambridge terms, it has done much to support the particular kind of mathematical approach of the University's Faculty of Mathematics. G. H. Hardy, one of those most responsible for the changes, was concerned in particular to assert the importance of pure mathematics. The undergraduate course of mathematics at Cambridge still reflects a historically-broad approach; and problem-solving skills are tested in examinations, though the setting of excessively taxing questions has been discouraged for many years.

Today, the Mathematical Tripos course comprises three undergraduate years (Parts IA, IB and II) which qualify a student for a BA degree, and an optional one year graduate course (Part III) which qualifies a student for an MMath (with BA) if they are a Cambridge fourth year student or a MASt (Master of Advanced Studies) degree if they come from outside just to do Part III. Assessment is mostly by written examination at the end of each academic year, with some coursework elements in the second, third and fourth years.[5]

During the undergraduate part of the course, students are expected to attend around 12 one-hour lectures per week on average, together with two supervisions. Supervisions are informal sessions in which a small group of students - normally a pair - goes through previously completed example sheets under the guidance of a faculty member, college fellow or graduate student. Each example sheet takes about 10 hours to complete, but this is highly dependent on the individual student and the difficulty of the example sheet in question.

During the first two years (Parts IA and IB) the schedule of courses is quite rigid, and students have relatively little choice. Courses in these years cover pure mathematics (algebra and analysis); applied mathematics (electromagnetism, special relativity, quantum mechanics and fluid dynamics); and statistics.[6] Until recently, some students took options within the Tripos that allowed them to give up some Mathematics courses in exchange for courses in Physics or Computer Science, with the possibility of changing to those subjects at the end of the first year - however, the Computer Science option was discontinued from the 2008-2009 academic year.

During the third year (Part II), a wider choice of courses is available and a student will typically begin to specialise in either pure mathematics or applied mathematics.

CATAM (Computer-Aided Teaching of All Mathematics)

One component of the mathematical Tripos is CATAM, a series of computational projects in parts IB and II. CATAM projects are completed in the first two terms of the academic year, with the first set of projects due in soon after the first term.

Specific structure of the Mathematical Tripos

There are four lecture courses, each consisting of twenty-four one-hour lectures each and all lectured in the Cockcroft Lecture Theatre. These are 'Groups', 'Vectors and Matrices', 'Numbers and Sets', and 'Differential Equations'.

Again, there are four lecture courses, each consisting of twenty-four one-hour lectures each and all lectured in the Cockcroft Lecture Theatre: 'Analysis I', 'Probability', 'Vector Calculus' and 'Dynamics and Relativity'.

There is a series of lecture courses examined in the second year - attendance is optional, since they will be repeated next year, but it is generally recommended that students attend at least one or two. They are held in the Mill Lane lecture rooms, and consist of 'Metric and Topological Spaces', 'Variational Principles', 'Optimisation', 'CATAM', and the non-examinable 'Concepts in Theoretical Physics'.

The year is examined over four 3-hour papers in late May or early June - these are the Mathematical Tripos Examination Papers.

Courses in Part IB include options from pure maths (such as 'Linear Algebra', 'Groups, Rings and Modules', 'Analysis II', 'Metric and Topological Spaces' and 'Geometry') and applied maths (such as 'Quantum Mechanics', 'Electromagnetism', 'Fluid Dynamics').

The Tripos was an important institution in nineteenth century England and many notable figures were involved with it. It has attracted broad attention from scholars. See for example:

In old age two undergraduates of the 1870s wrote sharply contrasting accounts of the Old Tripos — one negative, one positive. Andrew Forsyth, Senior Wrangler 1881, stayed in Cambridge and was one of the reformers responsible for the New Tripos. Karl Pearson Third Wrangler in 1879 made his career outside Cambridge.

J. J. Thomson, a Second Wrangler in 1880, wrote about his experience in:

J. E. Littlewood, a Senior Wrangler in the last years of the old Tripos, recalled the experience in:

On the importance of the Tripos in the history of mathematics in Britain: search on "tripos" in

For statistics on the number of graduates (men and women) between 1882 and 1940 see:

For the present-day Tripos see: