I Wanna Be Your Man

I Wanna Be Your Man

Infobox Single
Name = I Wanna Be Your Man 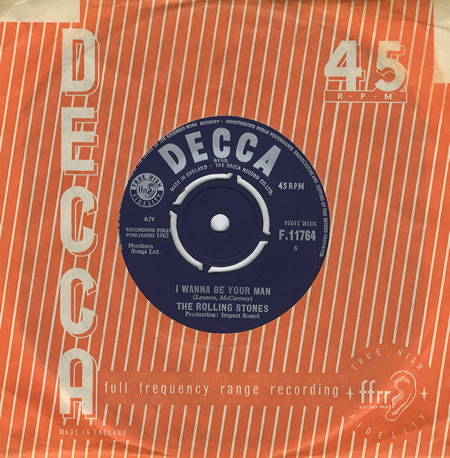 "I Wanna Be Your Man" is a rock song written by and , and recorded separately by and . The Rolling Stones' version was released earlier.

The Beatles' version was sung by and appeared on the album "". It was driven by a heavily tremoloed, open E chord on a guitar played through a amplifier with the "tremolo" setting turned up.

The Rolling Stones' version, an early hit single for them, was very "bluesy" and featured ' distinctive and Bill Wyman's driving bass playing. It also is one of the few Stones songs to feature backing vocals by Jones. In the USA the song was released later as B-side to "Not Fade Away" on 6 March 1964.

According to various accounts, either the Rolling Stones' manager/producer or the Rolling Stones themselves ran into Lennon and McCartney on the street as the two were returning from an awards luncheon. Listening to the Rolling Stones' camp plea for a single, the pair travelled back to rehearsal and finished off the song—whose verse they had already been working on—in the corner of the room while the impressed Rolling Stones watched. Lennon later commented, "That shows how much importance we put on it. We weren't going to give them anything "great", right?" [Paul McCartney, "Many Years From Now", p. 154, quoting an interview in "Hit Parader"]

Credits for The Beatles' version

Credits for The Rolling Stones' version