Damien Lamont Wilkins (born January 11, 1980 in Washington, North Carolina) is an American professional basketball player who last played for the Atlanta Hawks. He attended Dr. Phillips High School in Orlando, Florida and then enrolled at North Carolina State University. After two years at NCSU he transferred to the University of Georgia. He is the son of retired 13-year NBA veteran Gerald Wilkins and nephew of nine-time NBA All-Star Dominique Wilkins.

After a quick and promising start to his NCAA career at North Carolina State, Wilkins entered the 2001 NBA Draft but decided to withdraw and transfer to Georgia.[1] There, he had two solid but unspectacular seasons and went undrafted in 2004. A renewed diligence in the weight room helped Wilkins have a big summer league and shine in preseason action for the Sonics, allowing him to make the team. After biding his time and working after practice, Wilkins got his shot in late March of his rookie season and came through, scoring a career-high 21 points, including a few game-saving baskets, at Portland on March 24, 2005.[2] Wilkins would start seven games the rest of the way as the Sonics battled injuries. He proved himself in the 2005 Playoffs when injuries struck again, finishing with 15 points, six rebounds and five steals in the Sonics' Game 4 win over San Antonio.[3] A restricted free agent in the summer of 2005, Wilkins received an offer from the Minnesota Timberwolves in August 2005,[4] which the Sonics matched within 7 days.[5] 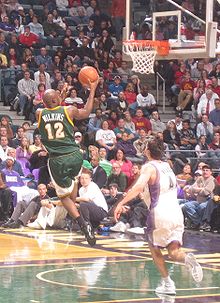 Wilkins playing for the Sonics.

In the 2007 season, the departure of Rashard Lewis and Ray Allen gave way to start Damien Wilkins. On November 16, 2007 he scored a career-high 41 points and grabbed 9 rebounds in a game against the Atlanta Hawks.[6]

On July 27, 2009, he was traded to the Minnesota Timberwolves along with Chucky Atkins for center Etan Thomas and two future second-round draft picks. [7] In the Minnesota 2009 home opener, Damien made a game-winning shot that beat the New Jersey Nets.

On September 28, 2010, he was signed by the Memphis Grizzlies, but he was waived at the end of training camp on October 21.

On December 3, 2010, he signed a contract with the Atlanta Hawks after Joe Johnson's injury.[8] The Hawks released him after one month.[9]