Maffei 1 is an elliptical galaxy in the constellation Cassiopeia. It is the closest giant elliptical galaxy to the Milky Way. Once believed to be a member of the Local Group, it is now known to belong to the IC 342/Maffei Group. It was named after Paolo Maffei, who discovered it and the neighboring Maffei 2 in 1968 from their infrared emissions. Maffei 1 might have a satellite—MB1.[5]

Maffei 1 lies in the Zone of Avoidance and is heavily obscured by the Milky Way's stars and dust. It had previously been catalogued as an emission nebula or H II region. If it were not obscured, it would be one of the brightest and best known galaxies in the sky. Contrary to common belief, it is possible to observe it visually, using a 30-40 cm or bigger telescope under a very dark sky.

Maffei 1 is located only 0.55° from the galactic plane in the middle of the zone of avoidance and suffers from about 4.7 magnitude of extinction (about 70 times) in the visible light. In addition to the extinction it is covered by myriads of faint galactic stars, which can be easily confused with the stars belonging to Maffei 1. These circumstances have seriously hampered distance determination to it.[2]

In 1971 soon after after its discovery Hyron Spinrad estimated the distance to Maffei 1 at about 1 Mpc, which would place it within the Local Group of galaxies. In 1983 this estimate was revised up to 2.1+1.3
−0.8 Mpc by Ronald Buta and Marshall McCall using the general relation between the luminosity and velocity dispersion for elliptical galaxies.[2] At that distance Maffei 1 was well outside the Local Group, but could have still influenced it in the past.[4]

In 1993 Gerard Luppino and John Tonry used surface brightness fluctuations to derive a new distance estimate to Maffei 1—4.15 ± 0.5 Mpc. Later in 2001 Tim Davidge and Sidney van den Bergh used adaptive optics to observe the brightest Asymptotic Giant Branch stars in Maffei 1 and concluded that it is located at the distance 4.4+0.6
−0.5 Mpc from the Sun.[4][2] The latests determination of the distance to Maffei 1, which is based on the re-calibrated luminosity/velocity dispersion relation for the elliptical galaxies and the updated extinction, is 2.85 ± 0.36 Mpc.

The larger (>3 Mpc) distances reported in the past 20 years mean that Maffei 1 has never been close enough to the Local Group to significantly influence its dynamic.[3] 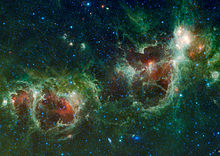 Maffei 1 is the bluish elliptical object near the bottom of this image.

Maffei 1 is visible in this image.