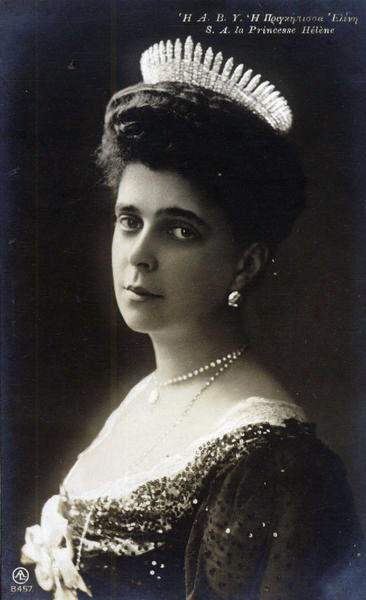 Grand Duchess Elena Vladimirovna of Russia , - , , sometimes known as Helen, Helena, Helene, Ellen, Yelena, Hélène, or Eleni, was a Russian as the daughter of and . She was the wife of .

Elena and her three brothers, Kirill, Boris, and Andrei, had an English nanny and spoke English as their first language. [Zeepvat, Charlotte, "The Camera and the Tsars: A Romanov Family Album," Sutton Publishing, 2004, p. 65] The young Elena had a temper and was sometimes out of control. When she posed for an artist at age four, she grabbed a paper knife and threatened her nurse, who hid behind the artist. "The little lady then transferred her attentions to me, her black eyes ablaze with fury," recalled the artist. [Zeepvat, p. 90] Elena, raised by a mother who was highly conscious of her social status, was also considered snobbish by some. "Poor little thing, I feel sorry for her," wrote her mother's social rival, Dowager Empress Maria Feodorovna, "for she is really quite sweet, but vain and pretty grandiose." [Zeepvat, p. 90]

She was initially engaged to , but Max backed out of the engagement. Elena's mother was furious and society gossiped about Elena's difficulty in finding a husband. Prince Nicholas of Greece first proposed in 1900, but Elena's mother was reluctant to allow her daughter to marry a younger son with no real fortune or prospects of inheriting a throne. She finally agreed to let Elena marry Nicholas in 1902 after it became clear that no other offers were on the horizon. [Zeepvat, p. 99] The Dowager Empress wrote that Elena "has a very brusque and arrogant tone that can shock people" and expected trouble in the marriage. [Zeepvat, p. 99] Elena's "grand manner" did irritate some people at the court, but her marriage was a happy one. [Zeepvat, p. 99]

The family was later affected by the turmoil of the and the subsequent turmoil in , which became a republic and resulted in the family living in France for a time.

While living in Grand Duchess Elena became deeply involved in charity work for Russian exiles, particularly children. Short of money due to their exile from and the loss of their n income, Prince Nicholas and his family lived in reduced, but elegant, circumstances. Grand Duchess Elena's fabulous jewel collection, as well as Prince Nicholas' own artwork, were their sources of income.

Due to their reduced financial circumstances, it was a great feat for the family to marry their three daughters so well. married ; Princess Elizabeth of Greece married Count Karl Theodor zu , a Bavarian landed aristocrat; and married the in 1935.

Grand Duchess Elena became a widow early in 1938, as Prince Nicholas suffered a heart attack and died suddenly. She remained in throughout , dying there in 1957.