Charnwood is a suburb in the Belconnen district of Canberra in the Australian Capital Territory.

Charnwood's design was based on the Radburn town planning principle. Under this design, houses were to face common parkland, with the suburb's streets servicing garages situated at the rear of the houses. The design failed in its application, however, as home owners built fences around the "park side" of their blocks, effectively screening the houses away from the common parkland. This created long, narrow, fenced walkways, with poor lighting and no neighbourhood surveillance. The network of pathways ensures that it is possible to walk from any point in the suburb to any other without directly crossing a road; pedestrian bridges can be used to cross the few major streets within the suburb.

According to the Act Planning and Land Authority website [1] the suburb is named after: "[a] former homestead in the Belconnen District; Henry Hall obtained a grant of 3,492 acres (14.13 km2) of land which he named 'Charnwood', 1833; named after the Forest of Charnwood in England."

Street names in Charnwood are named after New South Wales pioneers and the suburb name 'Charnwood' was gazetted on 9 September 1971. 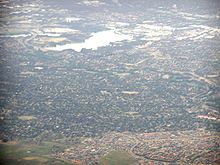 Each year, Saint Thomas Aquinas Catholic Primary School, Charnwood-Dunlop Primary School and Mount Rogers Scout Group hold the 'Charny Carny', a unique event which is held as the schools' joint fête. This carnival has the purpose of building community spirit and raising funds for both the schools and the Scout Group.