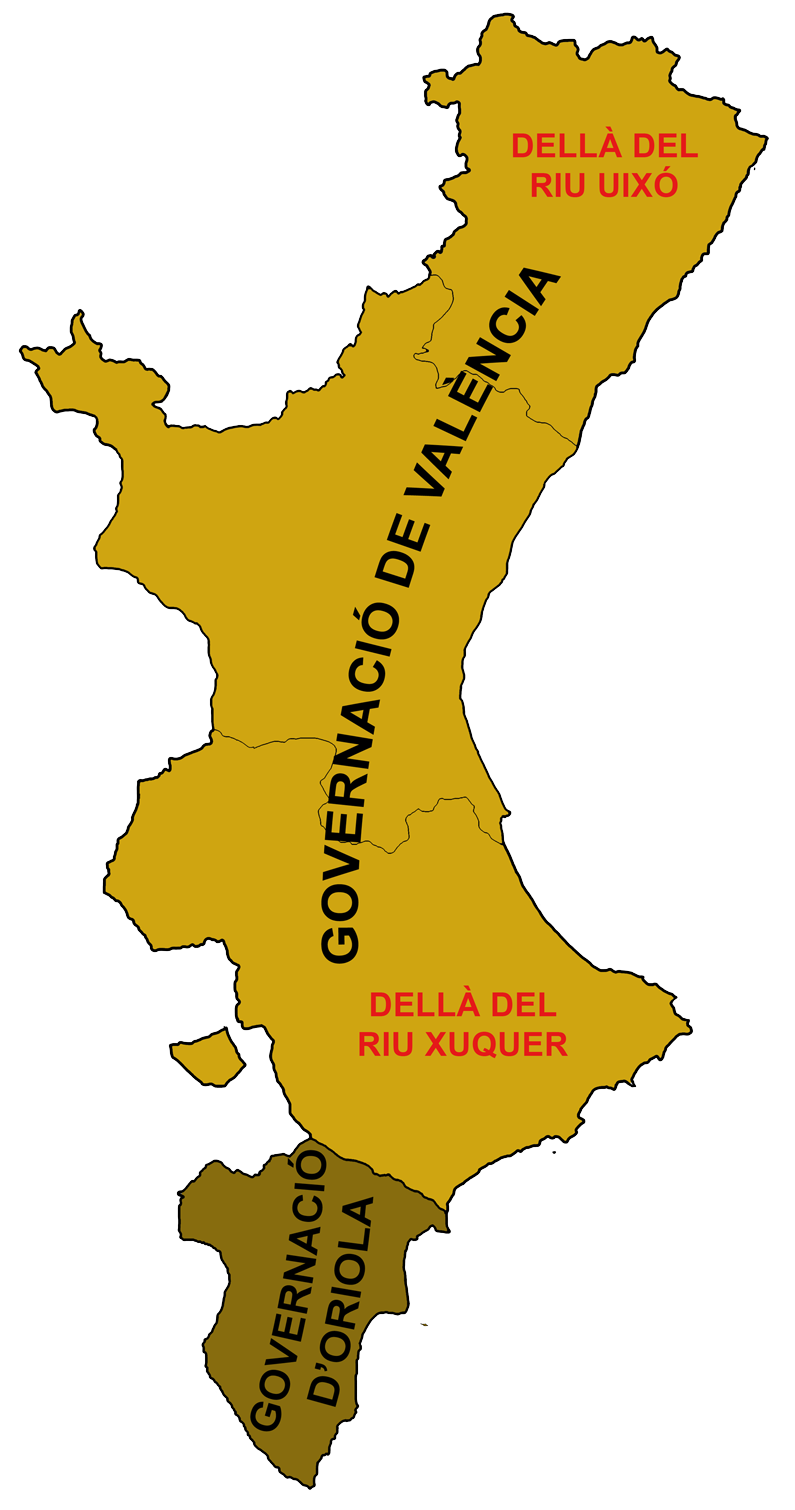 The Kingdom of Valencia was formally created in 1237 when the of Valencia was taken in the course of the . It was terminated by in 1707, by means of the , as a result of the .

During its existence, the Kingdom of Valencia was ruled by the laws and institutions stated in the Charters of Valencia ("Furs de València") which granted it wide self government, initially from the Crown of Aragon and, later on, from the Spanish Kingdom.

The boundaries and identity of the present Spanish of Valencia are essentially based on those of the former Kingdom of Valencia.

The conquest of what would later become the Kingdom of Valencia started in 1232 when the king of the , James I, called "Jaume I el Conquistador" or the Conqueror, took Morella, mostly with Aragonese troops. Shortly after, in 1233, and were also taken from the Balansiya ("Valencia" in the ) .

A second and more relevant wave of expansion took place in 1237, when James I defeated the Moors from the Balansiya taifa. He entered the city of Valencia on , which is regarded as the dawn of the Kingdom of Valencia.

A third phase started in 1243 and ended in 1245, when it met the limits agreed between James I and the heir to the throne of Castile, Alfonso the Wise, who would succeed to the throne as Alfonso X in 1252. These limits were traced in the between the Crown of Castile and the Crown of Aragon, which coordinated their Reconquista efforts to drive the Moors southward by establishing their respectively desired areas of influence. The Treaty of Almizra established the south line of Aragonese expansion in the line formed by the villes of Biar and Busot, today in the North of the . Everything South of that line, including what would be the , was reserved by means of this treaty for Castile.

The matter of the large majority of "" population, left behind from the progressively more southern combat front, lingered from the very beginning until they finally were expelled "en masse" in 1609. Until that moment, they represented a complicated issue for the newly established Kingdom, as they were essential to keep the economy working due to their numbers, which inspired frequent pacts with local Muslim populations, such as , allowing their culture various degrees of tolerance but, on the other side, they were deemed as a menace to the Kingdom due to their lack of allegiance and their real or perceived conspiracies to bring the to their rescue.

There were indeed frequent rebellions from the Moor population against Christian rule, the most threatening being those headed by the Moor chieftain Mohammad Abu Abdallah Ben Hudzail al Sahuir, also known as . He led important rebellions in 1244, 1248 and 1276. During the first of these, he briefly regained Muslim independence for the lands South of the , but he had to surrender soon after. During the second revolt, king James I was almost killed in battle, but Al-Azraq also was finally subjugated, his life spared only because of a long time relationship with the Christian monarch. During the third rebellion, Al-Azraq himself was killed but his son would continue to promote Muslim unrest and local rebellions remained always at sight.

James II called "Jaume II el Just" or the Just, a grandson of James I, initiated in 1296 a final push of his army further southwards than the Biar-Busot pacts. His campaign aimed at the fertile countryside around and the whose local Muslim rulers were bound by pacts with Castile and governing by proxy on behalf of this kingdom; Castilian troops often raided the area to assert a sovereignty which, in any case, was not stable but was characterized by the typical skirmishes and ever changing alliances of a frontier territory.

At the end of the process, four taifas had been wiped out: Balansiya, Alpuente, Denia and Murcia. Taking into account the standards of the day, it can be considered as a rather rapid conquest, since most of the territory was gained in less than fifty years and the maximum expansion was completed in less than one century. The toll in terms of social and politic unrest which was to be paid for this fast process was the existence of a large Muslim population within the Kingdom which neither desired to become a part of it nor, as long as they remained Muslim, was given the chance to.

Modern historiography sees the conquest of Valencia under the light of similar efforts by the : as a fight led by the King in order to gain new territories as free as possible of to the nobility. The new territories would then be only accountable to the King, thus enlarging and consolidating his power versus that of the nobility. Making it part of a growing trend evident in (said to end in 1492 with the final acts of the Reconquista in the capitulation of and the expulsion of the Jews) and well into the era of .

It is under this approach that the repopulation of the Kingdom is assessed today. The new Kingdom population was initially overwhelmingly and often subjected to revolts and the serious threat of being taken by any given fellow Muslim army put together for this purpose in the .

The process by which the monarchy strived to free itself from any noble guardianship was not easy as the nobility still held a big share of power and was determined to retain it as much as possible. This fact marked the colonization of the newly acquired territories, ruled by the "Lleis de Repartiments". Finally the Aragonese nobles were granted several domains but only managed to obtain the inland, mostly mountainous and sparsely populated parts of the Kingdom of Valencia.The king reserved the fertile and highly populated lands in the coastal plains to free citizens and incipient whose cities were given Furs or royal charters regulating civil law and administration locally, always accountable to the king.

This had linguistic consequences.:

*The coastal lands were mostly repopulated by speakers of the from the . Their language was an Italo-Western language of the group. In particular, part of the . The language of these set of settlers would evolve into , a distinctive variant of Catalan which has gained its own currency within the Catalan domain.

Another possibly primary driving force, but likely to be understated by modern historiography, was religious faith. In this regard, recognized the fight as a and James I was known for being a devout king.

The Kingdom of Valencia achieved its height during the early . The economy was prosperous and centered around trading through the , which had become increasingly controlled by the Crown of Aragon, mostly from the ports of Valencia and .

In the city of Valencia the "Taula de canvis" was created, functioning partly as a bank and partly as a market; altogether it boosted trading.The local industry, specially textile manufactures, achieved great development and the city of Valencia turned into a Mediterranean trading emporium where traders from all Europe worked. Perhaps the best symbol which summarizes this flamboyant period is the Silk Exchange, one of the finest European examples of civil and a major trade market in the Mediterranean by the end of the 15th century and throughout the 16th century.

Valencia was one of the first cities in Europe to install a as per the designs of . It was Valencian authors such as or who conformed the canon of classic Catalan literature.

Modern Era, the Germanies, and decay

In 1479 the Kingdom of Valencia merged with the rest of territories of the and the to form the modern .

Kings of (, - , ) maintained the privileges and liberties of the territories and cities which formed the kingdom and its legal structure and factuality remained intact. Meanwhile the rising had left behind its former status as a Kingdom of the and had emerged as a . The Empire shifted its focus to the and its possessions in Europe, rather than its Iberian territories.

During the 16th century Valencia lost its status as a preeminent commercial center of Europe to the rapidly developing cities of and . This was in part due to diminishing profits from the Mediterranean trade. The Spanish Empire was in frequent conflict with the which controlled most of the eastern Mediterranean. They prevented each other from reaching certain ports while Ottoman s like Barbarossa prayed on trade ships. Meanwhile the s such as , operating out of , , , and ports in were actively preying on shipping in the western Mediterranean, which included destructive raids in Christian ports along the coast, also Valencian ones. The combined effects represented a blow to the Kingdom of Valencia which had already been economically affected by the which had expelled the Jews back in 1492.

Besides, locally bred social tensions, fueled by the economic crisis, erupted in the form of the "". A "Germania" ("brotherhood") refers to an association or of s. The revolt they started in 1521, which led to civil unrest and bloody local clashes well into 1522, had several different causes, such as economic resent against the nobility and high , a will to oust them from the city command and, also, a religious resentment against the , who were closely associated to the nobles per ties, something which made them vital for the nobility's economy. This rebellion shared many traits and happened almost contemporarily to the one of the "Comuneros" in Castile.

As a result of the exhausted forces left by the clashes between nobles and high bourgeoisie versus the general populace and lesser bourgeoisie, the king used this power vacuum to enlarge his share of power and gradually diminish the ones of the local authorities; this meant that his requests for money in order to enlarge or consolidate the disputed possessions in Europe were progressively more frequent, more imperative and, conversely, less reciprocated for the Kingdom of Valencia, just as they were elsewhere for the rest of the Spanish Kingdom territories.

Then the expulsion in 1609 of the "mudejar" population meant a final blow for the Kingdom of Valencia, as thousands of people were forced to leave, entire villages got deserted and the countryside lost its main labour force, which further deepened the economic crisis. Since the expulsion meant the loss of the free workforce for the nobility, themselves and the upper bourgeoisie had to turn to the king seeking protection from the general populace, which meant that they had to renounce their former check and balance role before the requests of the kings, which was one of the driving forces of the Kingdom's autonomy.

The Kingdom of Valencia as a legal and politic organization was finally terminated in 1707 as a result of the . The local population mostly took side and provided troops and resources for Archduke Charles, the pretender who was arguably to maintain the legal . His utter defeat at the , near the borders of the Kingdom of Valencia, meant its legal and politic termination, along with other autonomous parliaments in the Crown of Aragon, as the were passed and the new King of the created a centralized Spain.

*Conquest of Valencia by El Cid