Songs of Our Soil

Songs of Our Soil 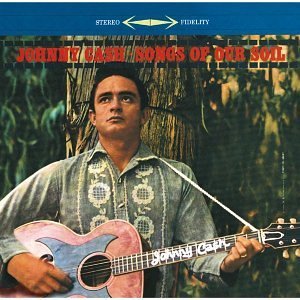 
"Songs of Our Soil" is the sixth album by the singer . It was originally released in September 1959 (see ), but later re-issued on (see ) with two s.

The album is something of a curiosity in that a majority of the songs involve dying. Death concludes "The Man on the Hill," "Hank and Joe and Me," "Clementine," "The Great Speckled Bird" and "My Grandfather's Clock." "Don't Step on Mother's Roses" is about a family losing their parents to death; first Mother, then Daddy. "The Caretaker" is the story of a cemetery caretaker wondering who will mourn for him when his time comes. Even "Five Feet High and Rising" ("the hives are gone; I lost my bees") and "Old Apache Squaw" ("...the next white man that sees my face is gonna be a dead white man") mention death in some way.

By his own admission, Cash was becoming fascinated by death during this time, in part due to his growing and dependence. [MAN IN BLACK by Johnny Cash, published in 1975]

All tracks composed by Johnny Cash; except where indicated