Penile erection is a physiological phenomenon where the penis becomes enlarged and firm. Penile erection is the result of a complex interaction of psychological, neural, vascular and endocrine factors, and is usually, though not exclusively, associated with sexual arousal. In some males, erection can occur spontaneously at any time of day, and is known as nocturnal penile tumescence when occurring during rapid eye movement sleep. 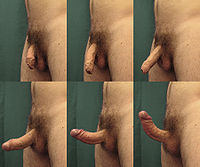 Composite image showing the development of a penile erection

The swelling, hardening and enlargement of the penis enables sexual intercourse. The scrotum may, but not exclusively, become tightened during an erection. In many cases, the foreskin automatically and gradually retracts, exposing the glans, but some males may have to manually retract their foreskin.

In the presence of mechanical stimulation, erection is initiated by the parasympathetic division of the autonomic nervous system (ANS) with minimal input from the central nervous system. Parasympathetic branches extend from the sacral plexus into the arteries supplying the erectile tissue; upon stimulation, these nerve branches release acetylcholine, which, in turn causes release of nitric oxide from endothelial cells in the trabecular arteries.[2] Nitric oxide diffuses to the smooth muscle of the arteries (called trabecular smooth muscle[3]), acting as a vasodilating agent. The arteries dilate, filling the corpora spongiosum and cavernosa with blood. The ischiocavernosus and bulbospongiosus muscles also compress the veins of the corpora cavernosa, limiting the venous drainage of blood.[4] Erection subsides when parasympathetic stimulation is discontinued; baseline stimulation from the sympathetic division of the ANS causes constriction of the penile arteries, forcing blood out of the erectile tissue.[5] The cerebral cortex can initiate erection in the absence of direct mechanical stimulation (in response to visual, auditory, olfactory, imagined, or tactile stimuli) acting through erectile centers in the lumbar and sacral regions of the spinal cord. The cortex can suppress erection even in the presence of mechanical stimulation, as can other psychological, emotional, and environmental factors. The opposite term is detumescence.

Although many erect penises point upwards, it is common and normal for the erect penis to point nearly vertically upwards or nearly vertically downwards or even horizontally straight forward, all depending on the tension of the suspensory ligament that holds it in position. An erect penis can also take on a number of different shapes, ranging from a straight tube to a tube with a curvature up or down or to the left or right. An increase in penile curvature can be caused by Peyronie's disease. This may cause physical and psychological effects for the affected individual, which could include erectile dysfunction or pain during erection. Treatments include oral medication (such as Colchicine) or surgery, which is most often reserved as a last resort.

Generally, the size of an erect penis is fixed throughout post-pubescent life. Its size may be increased by surgery,[7] although penile enlargement is controversial, and a majority of men were "not satisfied" with the results, according to one study.[8]

Erectile dysfunction can occur due to both physiological and psychological reasons, most of which are amenable to treatment. Common physiological reasons include diabetes, kidney disease, chronic alcoholism, multiple sclerosis, atherosclerosis, vascular disease, and neurologic disease which collectively account for about 70 percent of ED cases. Some drugs used to treat other conditions, such as lithium and paroxetine, may cause erectile dysfunction.[10][12]

Erectile dysfunction, tied closely as it is to cultural notions of potency, success and masculinity, can have devastating psychological consequences including feelings of shame, loss or inadequacy;[13] There is a strong culture of silence and inability to discuss the matter. In fact, around one in ten men will experience recurring impotence problems at some point in their lives.[14]