listen (help·info); An t-Òban in Scottish Gaelic meaning The Little Bay) is a resort town within the Argyll and Bute council area of Scotland. It has a total resident population of 8,120.[2] Despite its small size, it is the largest town between Helensburgh and Fort William and during the tourist season the town can be crowded by up to 25,000 people. Oban occupies a beautiful setting in the Firth of Lorn. Oban Bay is a near perfect horseshoe bay, protected by the island of Kerrera, and beyond Kerrera is Mull. To the north is the long low island of Lismore, and the mountains of Morvern and Ardgour.

Attractions in Oban include the Waterfront Centre, the Cathedral of St Columba, the Oban Distillery, Dunollie Castle, Dunstaffnage Castle and McCaig's Tower, which dominates the town's skyline. Oban is a convenient base from which to explore the sights of Kilmartin Glen.

The Oban Tourist Information Centre, operated under VisitScotland, is located in the centre of the town in Argyll Square. It is housed in an old Church of Scotland building.

In the 18th century, the land where Oban now stands supported very few households, sustaining only minor shipbuilding and quarrying. The modern town of Oban grew up around the distillery that was founded there in 1794. By the late 19th century, Oban was a busy port which shipped wool, whisky, slate and kelp to Liverpool and Glasgow. The arrival of the railways brought new prosperity to Oban, revitalising local industry and giving birth to local tourism. It was at this time that McCaig's Tower, a folly and prominent local landmark, was constructed, as well as the ill-fated Oban Hydro.

During World War II, Oban was a busy port used by Merchant and Royal Navy ships. The Royal Navy had a signal station near Ganavan which is now a private house. Also near Ganavan was an anti-submarine indicator loop station which detected any surface or submarine vessels between Oban, Mull and Lismore. There was a controlled minefield in the Sound of Kerrera which was controlled from a building near the caravan site at Gallanach. There is one surviving air raid shelter in the centre of Oban.

There was also a Royal Air Force flying boat base at Ganavan and on Kerrera. The airfield at North Connel was originally built by the Royal Air Force during World War II. A Sector Operations Room was built near the airfield and after the war this was extended to become the Royal Observer Corps Group HQ.

Oban was also important during the Cold War because the first Transatlantic Telephone Cable (TAT-1) came ashore at Gallanach Bay and this carried the "Hot Line" between the US and USSR presidents. There was protected accommodation for the cable equipment at Gallanach Bay.

Oban is considered the home of The Royal National Mod (a Gaelic festival) as the Mod was first held in Oban in 1892, with ten competitors on a Saturday afternoon. In 2003, Oban hosted the 100th Mod, and many signs were replaced with bilingual versions. As well as the 100th Mod, Oban also hosted the centenary Mod in 1992 (the year it became Royal). (The 100th Mod was later than the centenary because it was not held in the war years.) The 2009 Mod was again held in Oban.

The town has a two-screen cinema which is not currently operating as it closed in early 2010. Oban has also been used as a backdrop to several films including Ring of Bright Water and Morvern Callar. See [3].

The Oban War and Peace Museum advances the education of present and future generations by collecting, maintaining, conserving and exhibiting items of historical and cultural interest relating to the Oban area in peacetime and during the war years. A museum also operates within Oban Distillery, just behind the main seafront. The distillation of whisky in Oban predates the town: whisky has been produced on the site since 1794.[4]

In the 2010 Pipe Band season, the local Oban High School Pipe Band were successful in winning the World Pipe Band Championships in Glasgow, the Cowal Games competition, and the Champion of Champions for the year in the novice-juvenile grade. The band is led by piping legend Angus MacColl, who has taught all of the pipers.

The local amateur football team is Oban Saints with a small stadium situated in Mossfield. However, shinty is a more popular game locally, with two major teams, Oban Camanachd and Oban Celtic, in the town. The Oban Times runs a "Spot the Shinty Ball" competition each week. Oban Cricket Club was formed in 2003 and plays in nearby Taynuilt. Oban Lorne Rugby Football Club is one of the more successful teams in the Highlands[citation needed].

The Highlanders were a World Wrestling Entertainment wrestling tag-team originally from (and billed as from) Oban. Scuba Diving is also readily available around Oban. There are many dive operators running services in and around the area. The wreck diving is spectacular, with the Sound of Mull offering some truly world-class dive sites. Although weather and visibility can be variable, the local geography means that a dive somewhere can always be achieved.

A weekend chess congress is held in Oban each year in the Royal Hotel. It usually takes place on the last weekend of November or the first weekend of December and brings 150-200 players to Oban along with their families.

The West Highland Tennis Championships are held annually in July at Atlantis Leisure [5]and attract some of Scotland's best players to the town. Past champions include Colin Fleming and Judy Murray.[6] 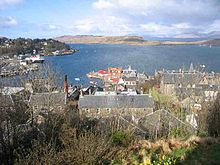 View of Oban Harbour with Kerrera (and Mull beyond)

Oban High School and Scotland High School (located in sister city of Laurinburg, North Carolina) share an exchange programme which enlightens many students on the different and similar cultures within the two countries. The two schools have hosts families of 20 students (ten from each) which share experiences for two weeks in the summer (Oban) and two weeks in the autumn (Laurinburg). The exchange was expanded in 2007 to include a participating law enforcement officer from each community. The law enforcement officer exchange is during the same time as the schools' exchange.

Oban is served by Kilmore & Oban Parish Church of the Church of Scotland. [4] There are three church buildings in the united parish, namely at Glencruitten Road and the white church (opened in 1957) at Corran Esplanade in the town, as well as Kilmore Church. The minister (since 2007) is the Rev Dugald Cameron, who formerly served at St. John's Renfield Church, Glasgow.[7]

The mother church of the Roman Catholic Diocese of Argyll and the Isles is St Columba's Cathedral at the north end of the Esplanade. During the 19th century, the Rector of the Pro-Cathedral was Father Allan MacDonald (poet), a poet and Gaelic scholar. The present Cathedral was designed by Sir Giles Gilbert Scott and constructed between 1932 and 1959.

The Scottish Episcopal Church is represented in Oban by the Cathedral Church of St John the Divine, situated in George Street. [5] It is one of two cathedrals of the united Diocese of Argyll and The Isles (Episcopal), the other being the Cathedral of the Isles in Millport.

There are several other churches in the town, including the Free Church of Scotland in Rockfield Road, the Baptist Church in Albany Street, Salvation Army in Stevenson Street, Elim Pentecostal Church in Soroba Road, Lorn Christian Fellowship(Independent) who meet at Oban High school and the Associated Presbyterian Church in Campbell Street. [6] The Congregational Church in Tweedale Street was built in 1880. [7]

A Kingdom Hall of Jehovah's Witnesses is located nearby at 57 Lorn Road.[8]

As with the rest of the British Isles and Scotland, Oban experiences a maritime climate with cool summers and mild winters. The nearest official Metoffice weather station for which online records are available is Dunstaffnage, about 2.7 miles north-north east of Oban town centre. The lowest temperature to be recorded in recent years is −7.9 °C (17.8 °F) during december 2010.[8]

Oban lies at the western end of the A85 road. It also has a railway station where a number of First ScotRail services operate to and from Glasgow Queen Street daily. The town is also an important ferry port, being Caledonian MacBrayne's busiest terminal. Oban is known as the Gateway to the Isles, with ferries sailing to the islands of Lismore, Colonsay, Islay, Coll, Tiree, to Craignure on Mull, to Castlebay on Barra and to Lochboisdale on South Uist. In 2005 a new ferry terminal was opened. In 2007 a second link span opened, allowing two vessels to load/unload at the same time.

Scottish Citylink operate services from Glasgow's Buchanan bus station several times a day, during the summer a service from Dundee via Perth (Service 973) and another to Edinburgh via Stirling (service 978) is also operated.

West Coast Motors operate many local services and also coach links as far south as Lochgilphead and as far north as Fort William.

Oban is also reachable by plane via Oban Airport at the village of North Connel. The airport is currently being upgraded (costing some £4.2 million), so commercial planes can operate life-line island services, using Oban as a hub.

In 2007 a further airlink was created between Oban and west-central Scotland with a seaplane service making it possible to fly from Glasgow city centre's Seaplane Terminal off the Clyde into the bay in Oban.