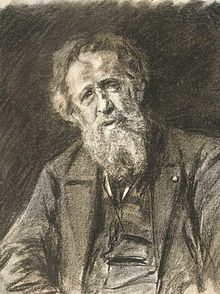 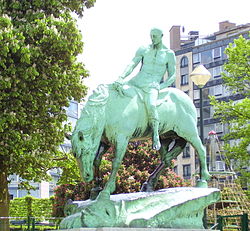 His first exhibit was a plaster sketch, "The Garland," shown at the Brussels Salon in 1851. Soon afterwards, on the advice of the painter Charles de Groux, he abandoned the chisel for the brush. His first important painting, "The Salle St Roch" (1857), was followed by a series of paintings including "A Trappist Funeral" (1860), "Trappists Ploughing" (1863), in collaboration with Alfred Verwee, "Divine Service at the Monastery of La Trappe" (1871) and episodes of the German Peasants' War (1878). About 1880 he was commissioned to illustrate those parts of Camille Lemonnier's description of Belgium in Le Tour du monde which referred to miners and factory-workers, and produced "In the Factory," "Smithery at Cockerill's," "Melting Steel at the Factory at Seraing" (1882), "Returning from the Pit," and "The Broken Crucible" (1884).

In 1882 he was employed by the government to copy Pedro de Campaña's "Descent from the Cross" at Seville, and in Spain he painted such characteristic pictures as "The Café Concert," "Procession on Good Friday," and "The Tobacco Factory at Seville" (Brussels Gallery). On his return to Belgium he was appointed professor at the Louvain Academy of Fine Arts.

The "Monument to Labour," which was acquired by the State for the Brussels Gallery, comprises four stone bas-reliefs, "Industry," "The Mine," "Harvest," and the "Harbour"; four bronze statues, "The Sower" "The Smith" "The Miner," and the "Ancestor"; and a bronze group, "Maternity".

Meunier died at Brussels on 4 April 1905. Constantin Meunier was a freemason, and a member of the lodge Les Amis Philanthropes of the Grand Orient of Belgium in Brussels. He was one of the cofounders of the Société Libre des Beaux-Arts of Brussels.

In 1939, a museum dedicated to him was opened in the last house in which Meunier lived and worked, in Ixelles. Today about 150 of his works are displayed there.