Lyja is a fictional character in the Marvel Comics universe. As a Skrull, she possesses the ability to shapeshift into almost any humanoid or animal form. Modifications on her body gave her the power to generate energy blasts.

Longtime enemies of the Fantastic Four, the Skrull empire embarked on a plan to infiltrate the Fantastic Four via seduction. The author of the plan, Paibok the Power Skrull, selected the warrior Lyja to be the spy and espionage agent, possibly because they had once had a failed affair.

Unbeknownst even to readers, during the Secret Wars Lyja replaced Alicia Masters, blind sculptor and love interest of the Thing. Posing as Alicia Masters, she greeted the Fantastic Four on their return to Earth from the Secret Wars.[1] The Skrull plan almost hit a snag when Lyja discovered that the Thing opted to stay behind at the end of the war, instead of returning home to Earth. Lyja instead seduced Johnny Storm, and when the Thing learned that Johnny and "Alicia" were lovers, they became estranged.[2] She eventually married Johnny, under the false pretenses of being Alicia Masters.[3]

Eventually, however, Alicia's stepfather (the villain known as the Puppet Master) realized that the woman claiming to be his stepdaughter was an imposter, and took his suspicions to the Thing. Lyja was forced by the Thing to transform back to her true Skrull appearance.[4] She disclosed her true identity, as well as the fact that the real Alicia was a captive of the Skrulls. She aided the Fantastic Four in finding the real Alicia Masters in the Skrull Empire, but was believed to be slain when she threw herself in the path of a blast which Paibok had meant for the Human Torch.[5]

In actuality, Paibok recovered Lyja and revealed to Devos the Devastator that she was still alive.[6] Paibok, with the assistance of Devos, awoke Lyja from her comatose state, and bestowed her with the power to fly and fire energy blasts from her hands (becoming "Lyja the Lazerfist"). These powers were later revealed to come from a special device implanted into her. Joining them in search of vengeance, the three arrived on Earth, and isolated and battled the Torch at Empire State University. Panicking, the Torch burst into his Nova Flame and destroyed the campus.[7] Alongside Devos and Paibok, Lyja witnessed a battle between the Fantastic Four and an alternate Fantastic Four. However, Lyja still bore feelings for the Torch and once again betrayed her cohorts to side with the Four.[8]

After returning to the Fantasic Four and Johnny, Lyja claimed she was pregnant with Johnny's child. Over time, Lyja and Johnny began to grow close again. When Lyja delivered the "child" (an egg), the implant that gave her the "Lazerfist" powers was also removed, returning Lyja to an ordinary Skrull with no extra powers beyond her shapeshifting. The implant was subsequently absorbed by a normal human, apparently an electronics expert named Raphael Suarez, who gained the "Lazerfist" powers, and attempted to contact the Fantastic Four for their assistance. However, after the hectic events that followed the hatching of the "egg", Raphael wandered off, realizing the Fantastic Four were not going to be of any help in their current state, and has not been referenced since.[volume & issue needed]

Although Lyja and Johnny were growing close, Lyja was continuously torn about telling Johnny something. She was too scared to risk shattering the bonds they had managed to form again, and kept putting it off. Ultimately, it was too late. The "egg" was revealed, not to be their child, but rather a Skrull bio-weapon, which Lyja subsequently destroyed after it hatched. Johnny, enraged at being betrayed and deceived again by Lyja, broke things off with her again.[volume & issue needed]

However, still in love with Johnny, Lyja stalked him while as a human, Laura Green. Johnny was initially interested in a fellow college student but when he realized nothing was going to materialize with her his focus shifted to Laura/Lyja. Lyja, having learned her lessons well, decided to eventually reveal herself before Johnny felt betrayed again. However, after sharing a kiss with Laura, Johnny already knew that his ex-wife was in fact Laura Green. During the Onslaught crisis when Lyja was injured she attempted to tell Johnny the truth but he informed her that he already knew. The couple seemed to be on track to reconciling their relationship but then the Fantastic Four were thought dead after fighting Onslaught, and Lyja left to attempt a normal life, masquerading again as a human woman.[volume & issue needed]

During the Secret Invasion storyline, Lyja poses as the Invisible Woman in order to send the Baxter Building to the Negative Zone.[12] 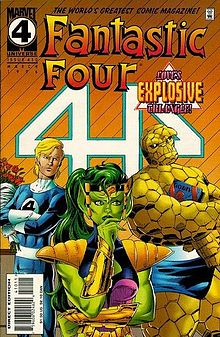 She reveals herself to her former spouse and attacks him, feeling angry that he had forgotten her. During the course of their battle, Johnny saves Lyja from being hit by a police car, pulled in through the portal. The two reconcile after that, but a Negative Zone creature attacks them. They manage to defeat the creature, but Lyja passes out from her injuries.[13] A bit later, when the "new" Fantastic Four fly off to the prison, Franklin and Valeria are grabbed by Negative Zone creatures, but Lyja saves them. She tells Johnny that she was working in a book store when a Skrull approached her, telling her to join them. They told her to blow up the Baxter Building, but instead she suggested sending them all to the Negative Zone, in hopes of keeping them from harm's way. When Ben, Johnny, Franklin, Val and the Tinkerer were ready to leave the Negative Zone she refused to leave, because she wanted to find out who she is.[14]

Lyja's Deviant Skrull heritage give her the ability to change size, shape, and color at will, taking on the appearance but not the characteristics of other beings and objects. Skrulls cannot duplicate the superhuman powers of the beings they use their shape-shifting powers to impersonate.

For a brief time, because of genetic alteration (really an implant)[citation needed] by Paibok the Power Skrull, Lyja had the ability to project blasts of laser-like beams called her "bio-blasts" from her hands without harm to herself. She could suspend herself in the air by firing her bio-blasts beneath her. These powers were lost when her body rejected the power-generating implant during her giving "birth".

Lyja has been trained in armed and unarmed combat by the Skrull military. She is also trained in acting and educated in Earth culture and history and the English language by Skrull tutors. She is also talented as a creator of abstract sculpture.

In the Secret Invasion storyline, she has recently regained her energy powers through unspecified means, as well as the ability to resist the incredible levels of heat and flame the Human Torch can generate. Lyja has also been seen manifesting dragonlike wings through her shape-shifting powers, enabling her to fly.

Lyja appears in the Marvel Zombies Universe on a planet besieged by the Zombie Galactus- consisting of zombie versions of Giant-Man, Spider-Man, Iron Man, Luke Cage, Wolverine and the Hulk during a Black Panther crossover. Here she possesses the power of the Invisible Woman as part of an experiment following the death of the Super-Skrull in this universe; unable to replicate the Super-Skrull, the Fantastic Four's powers were instead given to four different Skrulls. She is loyal to the Skrulls and seems insulted when the Johnny Storm of the regular Marvel Universe admits to knowing her.

She is shortly thereafter infected with the zombie virus, along with the rest of her team. During the subsequent conflict between the two teams, she is decapitated by a vibranium dagger thrown by the Black Panther, and her head is subsequently destroyed by Black Panther before she can bite Johnny.

In the MC2 universe, Lyja is once again married to the Human Torch and is a member of the Fantastic Five, under the name Ms. Fantastic. The couple has a son, Torus Storm, who inherited both Lyja's shape-shifting abilities and the Torch's flame powers.[15] She remains active among the Fantastic Five and is sporadically seen in the Spider-Girl series and related mini-series. Spider-Girl mentions in their first encounter that if she was not fighting Lyja she would probably ask for her autograph, as she was a fan.[16]

Lyja is introduced within the Skrulls vs. Power Pack miniseries as a young Skrull who is impersonating Katie Power[17], as well as being a commander under the orders of Warpriest Kh'oja[18]; in which he framed the Power siblings by stealing special treasures from Patchworld.