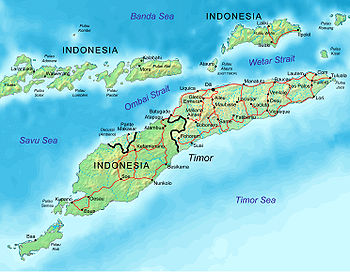 This article describes the geography of East Timor.

Location
Southeast Asia (or Oceania depending on definitions) [note A], northwest of Australia in the Lesser Sunda Islands at the eastern end of the Indonesian archipelago; note - East Timor includes the eastern half of the island of Timor, the Ocussi-Ambeno region on the northwest portion of the island of Timor, and the islands of Atauro and Jaco
Geographic coordinates
8°50′S 125°55′E﻿ / ﻿8.833°S 125.917°E﻿ / -8.833; 125.917
Map references
Southeast Asia, Wallacea
Area

Irrigated land
1,065 km2 (411 sq mi) (est.)
Natural hazards
Floods and landslides are common; earthquakes, tsunamis
Environment - current issues
Widespread use of slash and burn agriculture has led to deforestation and soil erosion
Environment - international agreements
NA
Geography - note
Timor is the Malay word for "Orient"; the island of Timor is part of the Malay Archipelago and is the largest and easternmost of the Lesser Sunda Islands. It was a portuguese territory until 1975, when it was invaded by Indonesia.
East Timor is the only Asian nation to lie entirely within the Southern Hemisphere.