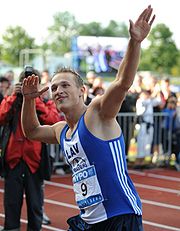 He won the German decathlon title in August 2010, scoring 8003 points to take a win over André Niklaus.[2]