Sludge is the name of several fictional characters in the Transformer toy line and fictional series. 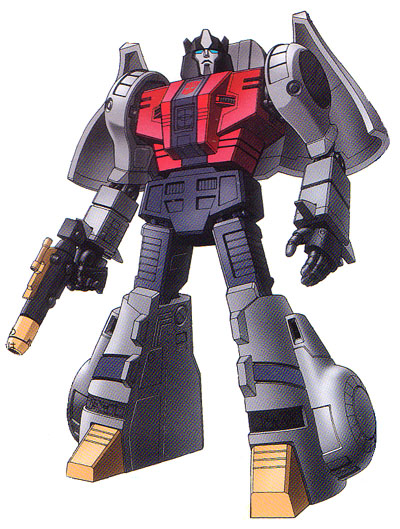 Sludge (Terro in , Bronto in ) is the Brontosaurus Dinobot. Sludge's strength is considered by some to be second only to 's in the Dinobot faction. Sludge also has the great power to shake the ground violently and make huge tremors when stomping around in his Brontosaurus mode, which is a good weapon for shaking up s. Sludge's biggest weakness is his belief that the strongest should lead and not necessarily the smartest. Another weakness of Sludge's is that he is depicted as being mentally slow. He joined the Autobots in the cartoon and comics in their first year, but didn't have a toy until . The other members of the Dinobots are Slag, Snarl, Swoop and their leader, .

Sludge was created by and Ratchet on Earth in 1984. He was created along with Grimlock and Slag as the original three Dinobots. It has not been explained why he or the other dinobots were able to be fitted with personalities which can only be found on Cybertron from Vector Sigma. Apparently there is a difference between the brain and personalities in Transformers. Their brains are simple, yet still it is the personalities that make them sentient. It is evident that addition of personalities or "sparks" and its origin was after the fact, and was hoped that this inconsistency would be overlooked.

Shortly after, Megatron convinced Sludge and the Dinobots that Optimus and the Autobots were their enemies and the Dinobots kidnapped Optimus Prime. Wheeljack and Ratchet, with the help of Chip Chase, created Swoop and Snarl and the two new Dinobots were used to rescue Prime from Grimlock, Slag, and Sludge. During that battle, Optimus saved the original Dinobots' lives and they then realized that the Autobots were really their friends.

In 1985, an Island with real dinosaurs was found by and Bumblebee. Optimus decided that Dinobot Island would be a good place for the Dinobots to train and practice their fighting skills, because the Ark was too small for the giant Dinobots. Megatron and the Decepticons found out about the island and wanted to harvest it for all the energy it produced. The Dinobots were thrown in a pit of tar, but were later rescued and got a bunch of real dinosaurs to help them attack Megatron.

Later, the Cybertronian Autobots and Decepticons began to malfunction because they ran out of Cybertonium, a crystalline substance only found on . The Dinobots were made on Earth, so they were the only Transformers not affected and were sent to Cybertron to get some. When they got to Cybertron, they disappeared. Spike and Carly went to Cybertron to find them and found Swoop, who led them to the other Dinobots that were captured and working for Shockwave. Eventually they were freed and brought the Cybertonium back so that the Autobot's bodies could be restored.

In , the Dinobots came in the shuttle with Optimus Prime towards the end of the attack on . When attacked, they went in the shuttle with and Hot Rod. The shuttle was shot down on and Kup and Hot Rod were captured by the . On Quintessa, the Dinobots met Wheelie, who led them to Kup and Hot Rod and they were able to rescue the two Autobots from the Quintessons. They took a ship to the planet of Junk and were with the Autobots when they attacked . They helped with the attack on Unicron but were not very effective.

None of the Dinobots (especially Sludge who only said "Quiet" in Grimlock's voice) but Grimlock played large roles in the episodes following the movie.

In the episode "Call of the Primitives" Primacron's assistant mistakenly called Sludge by the name "Sweep".

Sludge was among the Autobots who joined Optimus Prime in his mission on board the Ark to save the planet Cybertron from a meteor shower 4 million years ago. They were attacked by Megatron and his Decepticon forces. After crashing on the planet Earth, they were followed to Earth by the Decepticon named Shockwave. Grimlock and his soldiers were reformatted by the Ark's computer using the last of its energy to resemble Earth native animals. They attacked Shockwave and were buried with him together in a tar pit in the until the 1980s when the Autobot Ratchet recovered and repaired them.

The tar pit had corroded vital systems and the Dinobots lapsed into primitive savagery. Sludge took up a peaceful existence in a swamp, which was discovered by TV journalist Joy Meadows; as a result of the attention she gave to him, Sludge developed a long-standing crush on her. During the Dinobot Hunt, he was captured by Soundwave and made to fight Grimlock, a battle that destroyed a town and which Sludge won before the Autobots could recapture him. Once fully repaired, Sludge's crush on Joy lead him to seek her out and this led the Dinobots to assist her in trying to expose the Robot-Master scam, battling both the Decepticons and the Triple-I intelligence organisation.

Sludge remained tied to the Dinobots and happily followed them in going AWOL, returning to the Ark & supporting Grimlock as leader, battling the Predacons, and joining the Autobot Earthforce. He was destroyed by the Underbase-powered .

Sludges's body was seen among the deactivated Autobots Ratchet was doing his best to revive in Transformers #56, "Back from the Dead".

Along with his fellow Dinobots was one of the first Transformers to be revived by Nucleon. He was part of the united Autobot and Decepticon forces who opposed Unicron's assault on the planet Cybertron in 1991 (Transformers #75).

Sludge appeared in the 1986 story and coloring book "The Lost Treasure of Cybertron" by Marvel Books.

When civil war broke out on the planet Cybertron 8.7 million years ago between the Autobots and Deceptions, Sludge joined the Autobot cause.

When Autobot leader Optimus Prime and Decepticon leader Megatron disappeared in an accident with the space bridge 7.4 million years ago, the Autobot and Decepticon forces broke up into factions. Sludge joined up with the under the command of Grimlock. In The War Within, Sludge's alternate mode is a Cybertronian driller.

Grimlock lead L.S.C. members , , Slag, Sludge, Snarl, Swoop and Wheeljack in stealing a shipment of Energon from and the Predacons at the Moon Alpha Space Port (Transformers: The War Within - The Dark Ages #1).

reunited the Autobot factions, with Grimlock working as one of his advisors. Sludge became a member of the , a special Autobot unit directly under Grimlock's command.

The Dynobots were assigned to security at the peace talks between the Autobots, Decepticons and Ultracons 6 million years ago. It was their actions which saved the participants from being blown up in a sneak attack by Starscream and his s (Transformers: Age of Wrath #1).

After Optimus Prime and the crew of the Autobot ship the Ark were lost in space 4 million years ago, the Dynobots formed a search party to recover them. They tracked the Autobot ship to the planet Earth, where the Dynobots were reformatted into mechanical dinosaurs, and Sludge gained his current form. The Dynobots were ambushed by the s, and left in stasis lock until they were discovered by Prime and his crew in the 1980s. Because of their new alternate forms they were renamed the Dinobots.

In 2004 Sludge was among the Autobots under the leadership Optimus Prime who attempted to take back the planet Cybertron from the Decepticon tyrant Shockwave. After an accident with the teleportational systems of the supercomputer , Slag found himself sent back in time and on the planet Earth. He was reformatted in the form of an Earth with several other Autobots. A group of humans were able to bring the new Dinobots back to Cybertron and they helped overcome Shockwave (G.I. Joe vs. The Transformers II #4).

In the issue on Shockwave, Grimlock and the 'Dynobots' (sporting Cybertronian designs much like their War Within designs) appear in a story that partially homages their Marvel G1 origin. Seeking payback for a humiliating defeat by Shockwave, Grimlock pursued him to prehistoric Earth (which Shockwave was seeding with Energon). In order to protect themselves against Energon surges, the Dynobots required alternate modes covered by a layer of synthetic flesh; Grimlock refused to transform into Ice Age mammals and made the decision to go with dinosaurian forms instead as he thought them more impressive. The Dynobots got the initial jump on Shockwave, as their attack was too illogical for him to understand, but he quickly recovered and blasted the entire team into stasis lock with their synthetic skins destroyed. Grimlock got the final laugh, as the Dynobot ship fired a pre-programmed blast into the surrounding volcanoes to unleash a flow of lava that engulfs all six Transformers until they were uncovered by human paleontologists in 2006.

*Transformers: Dinobots Sludge (2003):In 2003, a set of -exclusive toys sold simply as featured repaints of "" molds as six Dinobots. One of the Dinobots sets included Snarl (a repaint of "" ) and Sludge (a repaint of "Beast Wars Neo" Sling).