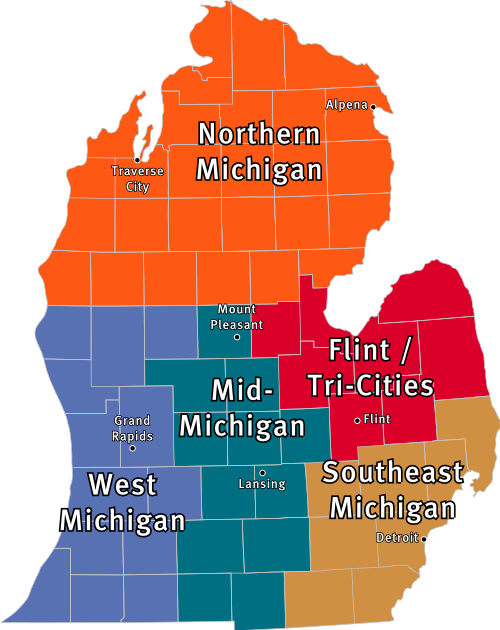 map_caption = Regions and major cities of the Lower Peninsula
map_background =
map_locator =
map_locator_x =
map_locator_y =
website =
footnotes =The Lower Peninsula of is surrounded by water on all sides except its southern border, which it shares with and . Geographically, the Lower Peninsula has a recognizable shape that many people associate with a . This has led to several folkloric creation myths for the area, one being that it is a hand print of Paul Bunyan, a giant lumberjack and favorite folk character in Michigan. This has also led to the distinctive phenomenon of Lower Peninsula residents holding out their hand and pointing to a spot on it when asked where they are from.

The Lower Peninsula is known, to those that aren't from , as "The Mitten", "Below the Bridge", and occasionally "The L.P." (in parallel with "the U.P." for the Upper Peninsula). To residents of the Lower Peninsula, it is usually just referred to simply as "Michigan". It is referred to - with more than a little sarcasm - as "" by residents of the Upper Peninsula, primarily through either Detroit being the Lower Peninsula's major city, or as an insult owing to Detroit's unpopularity. Residents of the Lower Peninsula are also jokingly referred to as "Trolls", because they live "below the bridge". [cite news |first=Mark |last=Meyer |title=Circle Theatre hunts for another hit with 'Escanaba In Love' |url=http://www.examiner.com/x-408-Chicago-Theatre-Examiner~y2008m8d21-Circle-Theatre-hunts-for-another-hit-with-Escanaba-In-Love |work=Chicago Theatre Examiner |publisher=Examiner.com |date=August 21, 2008 |accessdate=2008-08-26 |quote=These few hardy souls are known in Midwestern parlance as "Yoopers" (from "U.P.ers"), and like to refer to downstate Michiganians such as myself as "trolls" because we live "under" the Mackinac Bridge. |archiveurl= |archivedate= ] [cite book |last=Parrish |first=P. J. |title=A Thousand Bones |origyear=2007 |url=http://books.google.com/books?id=vkFbQ6BrQtcC&dq=michigan+trolls+mackinac+bridge&lr=&source=gbs_summary_s&cad=0 |accessdate=2008-08-26 |publisher=Simon and Schuster |isbn=1416525874 |pages=22 |chapter=Somebody's Daughter |chapterurl=http://books.google.com/books?hl=en&lr=&id=vkFbQ6BrQtcC&oi=fnd&pg=PA9&dq=michigan+trolls+mackinac+bridge&ots=R1CVy5tnRG&sig=it-tkFx2IBYCqPz7CJLe02k0Nk8#PPA22,M1 |quote=A troll was what people from Michigan's Upper Peninsula called anyone who lived "below the bridge," the five-mile-long span that connected the Upper and Lower peninsulas. ]

At its widest points, the Lower Peninsula is 277 s (446 km) long from north to south and 195 miles (314 km) from east to west. It contains nearly two-thirds of Michigan's total land area. The surface of the peninsula is generally level, broken by conical hills and glacial moraines usually not more than a few hundred feet tall. It is divided by a low water divide running north and south. The larger portion of the state is on the west of this and gradually slopes toward Lake Michigan. The highest point in the Lower Peninsula is not definitely established but is either Briar Hill at 1,705 feet (520 m), or one of several points nearby in the vicinity of Cadillac. The lowest point is the surface of Lake Erie at 571 feet (174 m).

Michigan's Lower Peninsula can be divided into six main regions based on geological, soil, and vegetation differences; amount of s or areas; populations; and :
* (which may include portions of West and Mid-Michigan)
**
*
**, a subregion of the Flint/Tri-Cities area
**Greater Tri Cities
*
* /
*West Michigan including