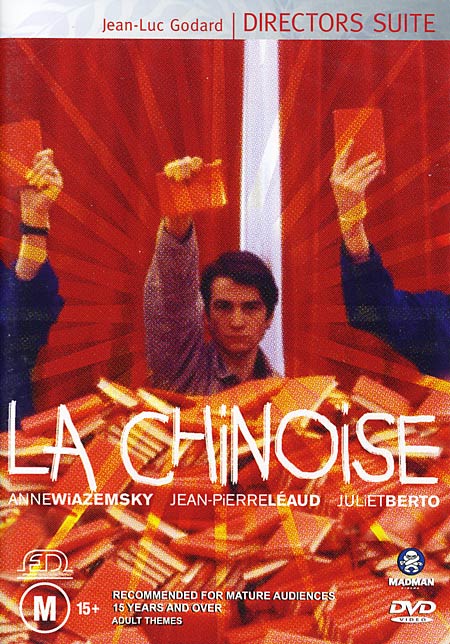 "La Chinoise" is a French political film directed by about young revolutionaries in .

"La Chinoise" is a loose adaptation of 's novel, "The Possessed". In the novel, a group of five disaffected citizens, each representing a different ideological persuasion and personality type, conspire to overthrow the Russian imperial regime through a campaign of sustained revolutionary violence. The film, set in contemporary Paris and taking place in a small apartment, is structured as a series of personal and ideological dialogues dramatizing the interactions of five French students — three young men and two young women — belonging to a radical groupuscle called the "Aden Arabie Cell".

The five members are Véronique (), Guillaume (), Yvonne (Juliet Bertro), Henri (Michel Semeniako) and Kirilov (Lex Di Bruijin). A black student named Omar (Omar Diop), "Comrade X", also makes a brief appearance. The two main characters, Véronique and Guillaume Meister (the latter named after the titular hero of 's famous 1795 "" ""), discuss the issue of terroristic violence and the necessity of political assassination to achieve revolutionary goals. As an advocate of terrorism as a means of bringing about the revolution, Veronique roughly corresponds to the character of Pyotr Stepanovich Verkhovensky in "The Possessed". Véronique and Guilluame are engaged in a personal relationship, with Véronique as the more committed, dominant partner.

Yvonne is a girl from the country who occasionally works as a prostitute for extra money to purchase consumer goods (much like Juliette Janson, the principal character in Godard's previous film, ""). Yvonne does most of the housecleaning in the apartment and, together with Guillaume, she acts out satirical political skits protesting in general, and U.S. President 's Vietnam policy in particular.

Henri is eventually expelled from the group for his apparent backsliding Soviet "revisionism", comically suggested by his defense of the 1954 movie, "". In this sense, he loosely corresponds to the character of Ivan Shatov in "The Possessed", a student who is marked for assassination because he has abandoned the tenets of leftist radicalism.

Kirilov is the only character in the film who actually takes his name from a character in Dostoyevsky's novel; in "The Possessed", Kirilov is a suicidal Russian engineer who has been driven to nihilism and insanity by the failure of his philosophical quest. True to his literary namesake, Godard's Kirilov also descends into madness and ultimately commits suicide.

Eventually, Véronique's once tender feelings toward Guillaume sour, and she uses a declaration of "unlove" to teach him (and the audience) the Maoist lesson of "struggle on two fronts". Véronique then leaves the apartment alone and sets off for what will prove to be a botched attempt to kill the Soviet Minister of Culture during his official diplomatic visit to France.

On the train ride "en route" to the planned assassination, Véronique is engaged in a discussion with the political philosopher, (Jeanson was actually Anne Wiazemsky's philosophy professor at the during 1966-67; a few years earlier, he had once been a communist and the head of a network which supported Algerian terrorists which led to his highly publicized arrest and trial by the French government in September 1960.)Fact|date=May 2008

In the scene on the train, Jeanson argues against the use of violence as a means to shut down the French universities. However, this does not dissuade Véronique (for her dialogue in this scene, Godard fed Anne Wiazemsky her lines through an earpiece).Fact|date=May 2008 The appearance of Francis Jeanson in the film seems to correspond with the character of Stepan Trofimovich Verkhovensky (Pyotr's father and Stavrogin's surrogate father) in "The Possessed". Indeed, much like Stepan Trofimovich, Jeanson is an intellectual and philosopher who serves as a kind of father-figure/mentor to Véronique — and his early example as a supporter of terrorism makes him responsible for influencing much of the destruction which is to follow.

Eventually, the train arrives at its destination and Véronique sets off to the hotel where the Soviet Minister of Culture is staying. She mistakenly reverses the digits of the room number and ends up killing the wrong man. As in "The Possessed", the revolutionary activities of the Aden Arabie cell have proved unsuccessful.

Thematically, "La Chinoise" concerns the 1960s political interest in such historical and ongoing events as the legacy of 's October 1917 Russian Revolution, the escalating U.S. military activities in the increasingly unstable region of , and especially the brought about by the under in the . The film also touches upon the rise of in French intellectual life by the mid-1960s, particularly the anti- ideas of the influential French Marxist, .

Godard likewise portrays the role that certain objects and organizations — such as Mao's , the , and other small leftist factions — play in the developing ideology and activities of the Aden Arabie cell. These objects and organizations appear to become ironically fetishized as entertainment products and fashion statements within a modern consumer-capitalist society — the very society which the student radicals hope to transform through their revolutionary project.Fact|date=May 2008

This paradox is illustrated in the various joke sunglasses that Guillaume wears (with the national flags of the USA, USSR, China, France and Britain each filling the frames) while reading Mao's Little Red Book, as well as the of having dozens of copies of the Little Red Book piled in mounds on the floor to literally create a defensive against the forces of capitalist imperialism, and a jaunty satirical pop song, "Mao-Mao" (sung by Claude Channes), heard on the soundtrack. Godard seems to suggest that the students are at once serious committed revolutionaries intent on bringing about major social change as well as confused bourgeois youngsters merely flirting with the notion of radical politics as a fashionable and exciting distraction.Fact|date=May 2008

"La Chinoise" is not one of Godard's most widely seen films, and until 2008 was unavailable on DVD in . However, a number of critics such as , and have hailed it as among his best.Fact|date=May 2008 Given that the film was made in March 1967 — one year before violent student protest became a manifest social reality in France — "La Chinoise" is now regarded as an uncannily prescient and insightful examination of the New Left activism during those years.Fact|date=May 2008

Along with "", "", "" and "", "La Chinoise" is often seen as signaling a decisive step towards Godard's eventual renunciation of "bourgeois" narrative filmmaking.Fact|date=May 2008 By 1968, he had switched to an overtly political phase of revolutionary Maoist-collectivist didactic films with and the , which lasted for the next six years until 1973.