An interest rate is the rate at which interest is paid by a borrower for the use of money that they borrow from a lender. For example, a small company borrows capital from a bank to buy new assets for their business, and in return the lender receives interest at a predetermined interest rate for deferring the use of funds and instead lending it to the borrower. Interest rates are normally expressed as a percentage of the principal for a period of one year[1].

In the past two centuries, interest rates have been variously set either by national governments or central banks. For example, the Federal Reserve federal funds rate in the United States has varied between about 0.25% to 19% from 1954 to 2008, while the Bank of England base rate varied between 0.5% and 15% from 1989 to 2009,[2][3] and Germany experienced rates close to 90% in the 1920s down to about 2% in the 2000s.[4][5] During an attempt to tackle spiraling hyperinflation in 2007, the Central Bank of Zimbabwe increased interest rates for borrowing to 800%.[6]

The interest rates on prime credits in the late 1970s and early 1980s were far higher than had been recorded – higher than previous US peaks since 1800, than British peaks since 1700, or than Dutch peaks since 1600; "since modern capital markets came into existence, there have never been such high long-term rates" as in this period.[7]

The nominal interest rate is the amount, in money terms, of interest payable.

For example, suppose a household deposits $100 with a bank for 1 year and they receive interest of $10. At the end of the year their balance is $110. In this case, the nominal interest rate is 10% per annum.

The real interest rate, which measures the purchasing power of interest receipts, is calculated by adjusting the nominal rate charged to take inflation into account. (See real vs. nominal in economics.)

If inflation in the economy has been 10% in the year, then the $110 in the account at the end of the year buys the same amount as the $100 did a year ago. The real interest rate, in this case, is zero.

After the fact, the 'realized' real interest rate, which has actually occurred, is given by the Fisher equation, and is

where p = the actual inflation rate over the year. The linear approximation

The expected real returns on an investment, before it is made, are:

= expected or projected inflation over the year

There is a market for investments which ultimately includes the money market, bond market, stock market and currency market as well as retail financial institutions like banks.

Exactly how these markets function is a complex question. However, economists generally agree that the interest rates yielded by any investment take into account:

This rate incorporates the deferred consumption and alternative investments elements of interest.

According to the theory of rational expectations, people form an expectation of what will happen to inflation in the future. They then ensure that they offer or ask a nominal interest rate that means they have the appropriate real interest rate on their investment.

This is given by the formula:

The level of risk in investments is taken into consideration. This is why very volatile investments like shares and junk bonds have higher returns than safer ones like government bonds.

Generally speaking a longer-term investment carries a maturity risk premium, because long-term loans are exposed to more risk of default during their duration.

Most investors prefer their money to be in cash than in less fungible investments. Cash is on hand to be spent immediately if the need arises, but some investments require time or effort to transfer into spendable form. This is known as liquidity preference. A 1-year loan, for instance, is very liquid compared to a 10-year loan. A 10-year US Treasury bond, however, is liquid because it can easily be sold on the market.

A basic interest rate pricing model for an asset

Assuming perfect information, pe is the same for all participants in the market, and this is identical to:

in is the nominal interest rate on a given investment
ir is the risk-free return to capital
i*n = the nominal interest rate on a short-term risk-free liquid bond (such as U.S. Treasury Bills).
rp = a risk premium reflecting the length of the investment and the likelihood the borrower will default
lp = liquidity premium (reflecting the perceived difficulty of converting the asset into money and thus into goods).

What is commonly referred to as the interest rate in the media is generally the rate offered on overnight deposits by the Central Bank or other authority, annualized.

The total interest on an investment depends on the timescale the interest is calculated on, because interest paid may be compounded.

In finance, the effective interest rate is often derived from the yield, a composite measure which takes into account all payments of interest and capital from the investment.

Interest rates are the main determinant of investment on a macroeconomic scale. The current thought is that if interest rates increase across the board, then investment decreases, causing a fall in national income. However, the Austrian School of Economics sees higher rates as leading to greater investment in order to earn the interest to pay the depositors. Higher rates encourage more saving and thus more investment and thus more jobs to increase production to increase profits. Higher rates also discourage economically unproductive lending such as consumer credit and mortgage lending. Also consumer credit tends to be used by consumers to buy imported products whereas business loans tend to be domestic and lead to more domestic job creation [and/or capital investment in machinery] in order to increase production to earn more profit.

By altering interest rates, the government institution is able to affect the interest rates faced by everyone who wants to borrow money for economic investment. Investment can change rapidly in response to changes in interest rates and the total output. 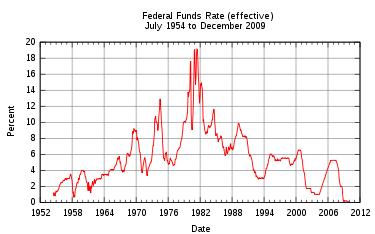 The Federal Reserve (often referred to as 'The Fed') implements monetary policy largely by targeting the federal funds rate. This is the rate that banks charge each other for overnight loans of federal funds, which are the reserves held by banks at the Fed. Open market operations are one tool within monetary policy implemented by the Federal Reserve to steer short-term interest rates. Using the power to buy and sell treasury securities.

Loans, bonds, and shares have some of the characteristics of money and are included in the broad money supply.

By setting i*n, the government institution can affect the markets to alter the total of loans, bonds and shares issued. Generally speaking, a higher real interest rate reduces the broad money supply.

Through the quantity theory of money, increases in the money supply lead to inflation.

Because interest and inflation are generally given as percentage increases, the formulae above are (linear) approximations.

is only approximate. In reality, the relationship is

The formulae in this article are exact if logarithms of indices are used in place of rates.

Interest rates are usually positive, but not always. Given the alternative of holding cash, and thus earning 0%, rather than lending it out, profit-seeking lenders will not lend below 0%, as that will guarantee a loss, and a bank offering a negative deposit rate will find few takers, as savers will instead hold cash.[8]

Negative interest rates have been proposed in the past, notably in the late 19th century by Silvio Gesell.[10] A negative interest rate can be described (as by Gesell) as a "tax on holding money"; he proposed it as the Freigeld (free money) component of his Freiwirtschaft (free economy) system. To prevent people from holding cash (and thus earning 0%), Gesell suggested issuing money for a limited duration, after which it must be exchanged for new bills— attempts to hold money thus result in it expiring and becoming worthless.

You can see a list of current interest rates at these sites:

Historical interest rates can be found at: