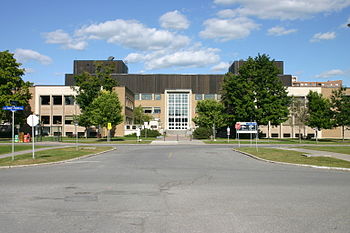 The Main Building, or Main Statistics Canada Building, is a four storey federal government office building located at 150 Tunney's Pasture Driveway in the Tunney's Pasture area of Ottawa, Canada. It is connected on the north side by the Jean Talon Building and on the south side by the R. H. Coats Building. Most of its 1,700 occupants work for Statistics Canada. Other tenants include Health Canada, Public Works and Government Services Canada, and SNC-Lavalin.

The building was completed in 1952 to accommodate the growing staff of the Dominion Bureau of Statistics. At that time the Main Building was only one of two buildings in Tunney’s Pasture - the other being a heating plant.

In recent years, the building has experienced structural and environmental problems such as water leakage and power failures.[1].