Coin of Cleopatra Thea. Reverse shows a double cornucopia. The Greek text reads ΒΑΣΙΛΙΣΣΗΣ ΚΛΕΟΠΑΤΡΑΣ ΘΕΑΣ ΕΥΕΤΗΡΙΑΣ. The date ΖΠΡ is year 187 of the Seleucid era, corresponding to 126–125 BC 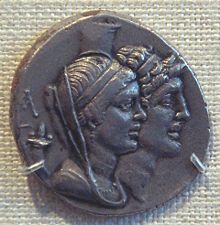 Cleopatra Thea (Greek: Κλεοπάτρα Θεά, which means "Cleopatra the Goddess") (ca. 164–121 BC) surnamed Eueteria (i.e., "Benefactress") was the ruler of the Hellenistic Seleucid Empire. She ruled Syria from 125 BC after the death of Demetrius II Nicator. She eventually ruled in co-regency with her son Antiochus VIII Grypus, who poisoned her in 121 or 120 BC.[1][2]

Cleopatra Thea was a daughter of Ptolemy VI of Egypt and Cleopatra II. She had two brothers named Ptolemy Eupator and Ptolemy respectively. Her sister Cleopatra III was Queen of Egypt and married to Ptolemy VIII, an uncle. It is possible that Berenice, the fiancee of Attalus III, king of Pergamum is another sister.[2]

Cleopatra Thea grew up in Egypt as the daughter of Ptolemy VI and Cleopatra II. She was probably born ca. 164 BC. She may have been engaged to her uncle Ptolemy VIII king of Cyrene in 154, but he eventually married her sister Cleopatra III. In 150 BC she married Alexander Balas and had a son named Antiochus VI Dionysus. In 145 BC Alexander Balas was killed in battle against Demetrius II. Demetrius set himself up as co-ruler with the young boy Antiochus VI, but may have killed him in 142 BC.

In 139 BC Demetrius II was captured fighting against the Parthians and was held prisoner by them until 129 BC. After Demetrius' captivity, his younger brother, Antiochus VII Sidetes, who was raised in the city of Sidon of Pamphylia (hence his last name), returned and claimed the throne. He married Cleopatra Thea in 138 BC and became king. Cleopatra Thea bore him at least one son, Antiochus IX Cyzicenus. The names of any other children are uncertain.

In 129 BC, the Parthians released Demetrius II, as a political manoeuvre against Sidetes, to claim his throne and his wife. That same year Sidetes was killed fighting the Parthians. Cleopatra had taken the precaution of sending Antiochus IX (her son by Antiochus VII) to Cyzicus in Asia Minor (hence his surname). Demetrius returned home and regained his throne, taking Cleopatra Thea as his wife by his side.[1][2]

In 132/131 BC Cleopatra Thea's mother, Cleopatra II of Egypt rebelled against her brother Ptolemy VIII Euergetes II Tryphon. In 127 BC Cleopatra II fled to her son-in-law Demetrius' court in Syria.[3]

Demetrius' elder son, Seleucus, became king with the name Seleucus V in 125 BC. However, shortly after, his mother Cleopatra Thea, had him murdered. From 125 BC to 121 BC, Cleopatra ruled Syria and to legitimize her reign, she shared the throne with her son, Antiochus VIII Grypus. Antiochus VIII was married to Tryphaena, the daughter of Ptolemy VIII and Cleopatra III.[2][4]

Grypus became less controllable as he grew up and in 121 BC Cleopatra Thea decided to eliminate him. As he returned from a hunt one day, she offered him a cup of wine. Since this was not common behavior for her, Grypus was suspicious and forced her to drink the wine, which killed her.[2]

Grypus re-organised the state and for the next eight years he provided stability and financial recovery. This period would end ca. 114 BC, when Cleopatra Thea's other son, Antiochus IX Cyzicenus, returned to Syria to claim the throne and civil war started again.