The Canadian 1 dollar coin (commonly called Loonie) is a gold-coloured, bronze-plated, one-dollar coin introduced in 1987. It bears images of a common loon, a bird which is common and well known in Canada, on the reverse, and of Queen Elizabeth II on the obverse.

The design for the coin was meant to be a voyageur theme, similar to the country's previous one dollar/silver dollar coin, but the master dies were lost by the courier service while in transit to the Royal Canadian Mint in Winnipeg. In order to avoid possible counterfeiting, a different design was used.[1]

The coin has become the symbol of the Canadian dollar; media often discuss the rate at which the loonie is trading against other currencies. The nickname loonie (huard in French) became so widely recognized that on March 15, 2006 the Royal Canadian Mint secured the rights to the name "Loonie".[2] The name is so ubiquitous that, when it was introduced in 1996, the Canadian 2 dollar coin was nicknamed the "Toonie" (a portmanteau of "two" and "loonie").

The coin—an 11-sided curve of constant width—is made of Aureate, a bronze-electroplated nickel combination. In order to maintain a constant width of 26.5 mm the "sides" of the coin are not exactly straight, but curved in the same manner as the 7-sided British twenty pence and fifty pence coins (the latter is comparable in size and value to the loonie). Its size was (and remains) nearly identical to that of the then-circulating Susan B. Anthony dollar and its successors in the United States. The total composition of the coin is 91.5% nickel and 8.5% bronze. The bronze is about 88% copper and 12% tin.

The coin was released on June 30, 1987. The $1 note remained in issue and in circulation along with the coin for the next two years, until the note was finally withdrawn on June 30, 1989.[3] The coin has been met with a general public acceptance. The town of Echo Bay, Ontario, home of loonie designer Robert-Ralph Carmichael, has erected an enormous loonie in his honour along the highway—similar to Sudbury's 'Big Nickel'.

The design has been changed several times for commemorative editions: 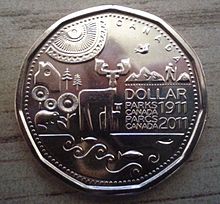 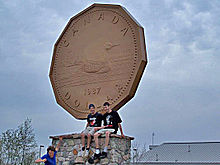 In recent years, the golden-coloured loonie became associated with Canada's winning hockey and curling teams and has been viewed as a good-luck charm in international competition. The legend began during the 2002 Winter Olympics, when a Canadian icemaker for the ice surfaces in the ice hockey tournament, Trent Evans, buried a loonie under centre ice.[17] The original reason for placing the loonie was to assist in the puck-drop: the centre ice at Salt Lake was emblazoned with a large logo, and was missing the customary circle used by the referee and face-off players as a target for the puck — so he needed to add some kind of a dot as a puck target that would not stand out, and a loonie buried under the ice served well. Both the Canadian men's and women's hockey teams won gold in the tournament, the men's 50 years to the day after their last gold medal victory. Following the Games, Team Canada executive director Wayne Gretzky recovered the coin and gave it to the Hockey Hall of Fame.

A loonie was also used at the IIHF World Hockey Championships between Canada and Sweden on May 11, 2003. This lucky loonie is known affectionately as the Helsinki Loonie. It was hidden surreptitiously before the Gold-Medal hockey game and saw Team Canada to victory. After forward Anson Carter scored against Swedish goaltender Mikael Tellqvist in overtime to win the World Hockey Championship for Canada, Team Canada officials admitted they had placed a Loonie in the padding beneath the crossbar of the Swedish net.[18]

The legend is also prevalent in curling, as the Kevin Martin rink at the 2002 Winter Olympics had won silver medals on a sheet with silver-coloured quarters underneath the surface. At the 2006 Winter Olympics, the Canadian icemakers in the curling tournament buried two loonies, one at each end of the sheet — coincidentally, Brad Gushue would win the gold medal there. In the same Olympics, the icemakers at the hockey tournament announced that they would not bury a loonie under the ice. The men's team finished out of the medals while the women's team won gold. Likewise, for the 2010 Winter Olympics, as part of the venue construction for the curling venue, three loonies were placed in the floor by the architect before the concrete was poured.[19] Both the Canadian Men and Women's Ice Hockey team took home Gold.

This legend is kept alive by the Royal Canadian Mint, which has since issued specially-designed "Lucky Loonies" for each year the summer and winter Olympics Games are held. Two new Olympic-themed loonies are due to be released in commemoration of the 2010 Winter Olympics being held in Vancouver-Whistler.

Team Russia has also made use of the lucky loonie — in the 2008 IIHF World Championship in Quebec City Alexander Ovechkin famously dug out the "lucky loonie" from centre ice after Russia beat Canada 5–4 in overtime and gave it to Russian teammate Ilya Nikulin, who cut it in two and made two necklaces out of the souvenir. Capitals defenceman Mike Green, who was on the losing Canadian team in that game, says Ovechkin's jewellery still makes an appearance from time to time. Green would love to get a chance to steal that half loonie away from his tormentor, but the opportunity simply hasn't come up.

An episode of Star Trek: Deep Space Nine ("Blaze of Glory") also made mention of a lucky loonie – although the episode's air date (12 May 1997) predates the more-recent Olympic tradition, making it impossible for the scriptwriter to have intended a connection between the fictional coin and its real-world counterpart. The character, Michael Eddington, had a family heirloom in the form of a 22nd century Canadian one dollar coin that he called his "lucky loonie". 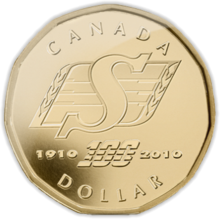 On September 2, 2010 at Regina, Saskatchewan the Royal Canadian Mint launched a commemorative one-dollar circulation coin honouring the Canadian Football League's Saskatchewan Roughriders' 2010 centennial. The coin's reverse features the Roughrider logo and is dated 1910-2010. The circulating mintage was limited to 3,000,000 coins.[10] However due a production oversight, the obverse of the Roughrider loonie does not bear the mandated Royal Canadian mint logo. On July 21, 2006, the Royal Canadian Mint announced its policy and unveiled its new privy mark to be displayed below the monarch's effigy on the obverse of all circulation and numismatic coinage beginning in 2006.[20]