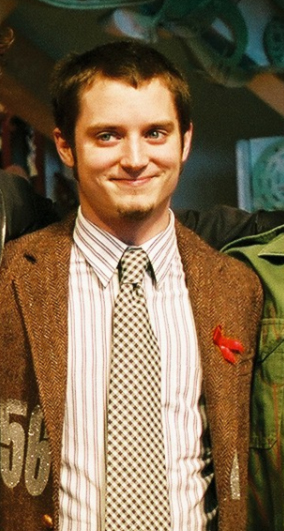 Elijah Jordan Wood (born ) is an American . Acting since the age of eight, he includes among his many film roles, in 's "The Lord of the Rings" trilogy. Making his film debut at age eight with a minor part in "" (1989), he landed a succession of subsequent larger roles, and became a critically acclaimed child actor by age 13. After his role as Frodo in "The Lord of the Rings", he has resisted typecasting by choosing varied roles in critically-acclaimed films such as "", "", "Sin City", "" and "Everything Is Illuminated". Most recently he starred in the film "" (2007) and provided the voice of the main character, Mumble, in the award-winning animated film "". He also played an American tourist turned vampire in "". In 2005, he started his own record label, . His next project is "The Passenger" (2008).

In 2006, he became a well-known voice actor in video gaming and would soon become the voice of the video game icon, Spyro the Dragon, starting with "".

In 2008, he set a new world record when he became the first person ever to cross the on ropes whilst appearing on Jack Osbourne's hit show . [cite news | url=http://xtremesport4u.wordpress.com/| title=A Famous Adrenaline Junkie - Jack Osbourne | publisher=itv2 | accessdate=2008-09-27 ]

Wood, the second of three children, was born and raised in to Debra D. (née Krause) and Warren W. Wood, operators. [ [http://www.filmreference.com/film/99/Elijah-Wood.html Elijah Wood Biography (1981-)] ] He is of German, Polish, Irish and English descent. As a child he took piano lessons from Marlene Loftsgaarden in Cedar Rapids. He took to the stage in his elementary school's staging of the play "". The following year, he graduated to the title character in "". He also served as boy during the production of "", produced by the Marion Creative Council.

Wood modeled and did local commercials before moving with his family to in 1988. It was there that Wood got his first break: a small role in a video by - "Forever Your Girl," directed by . Film work followed almost instantly in "" (1989). It was Wood's role as 's son in 's 1990 film "Avalon" (the third film in the Baltimore trilogy containing 1982's "Diner" and 1987's "") that first gave Wood attention, as the film received widespread critical acclaim and was nominated for four Academy Awards.

After a small part in the pot-boiler "Internal Affairs" (1990), he secured his first starring role in "Paradise" (1991), in which he played a young boy who brings estranged couple and back together. He received good reviews for his performance - some said it was one of the best things about the film - and from there, he went on to co-star with and in "Forever Young" and with in "Radio Flyer" (both were released in 1992).

In 1993, he co-starred with in "The Good Son", and in the same year he had the lead role in "The Adventures of Huck Finn". In 1994 he starred in "The War" (1994), with . His performance in this movie gained him a nomination for a 'Young Star Award' (for which he was nominated four times, and won twice), and said in his review of the film that:

Also in 1994, he had the title role in "North". In 1995 he appeared in the music video for ’ "Ridiculous Thoughts".The following year he got the lead role in "Flipper" (1996), which was not very successful, but the subsequent critical and financial success of 's "The Ice Storm" (1997) provided a positive development in the young actor's career. As the soulfully dazed and confused Mikey Carver, Wood gave a portrayal remarkable for its rendering of the thoughtfulness and exquisite hopelessness inherent in the character.

In 1997 he starred in Oliver Twist, as . 1998's "Deep Impact" and "" did not allow Wood the same degree of character development, but were great financial successes and further stepping stones in Wood's evolution from winsome child star to impressive young actor.

Wood's next role was as the boyfriend of a wannabe hip-hop groupie in 's problematic "Black and White" (1999). He followed this with a role as a junior hitman in "Chain of Fools".

Wood further developed as an actor in "", the first installment of director 's adaptation of 's literary trilogy. His most hotly anticipated project, the 2001 film gave Wood top billing as Frodo Baggins, alongside a glittering cast that included , , , , , and .

" The Lord of the Rings" was filmed in and, before the cast left the country, Jackson gave Wood two gifts: one of the props used on the set and Sting, Frodo's sword. He was also given a pair of prosthetic "hobbit feet" he wore during filming. That same year, the young actor could be seen in less mystical surroundings, courtesy of Ed Burns' "Ash Wednesday", a crime drama that also featured and .

In 2002, Wood lent his voice to 's straight-to-video release of "". Of course, his most substantial role of 2002 is inarguably his return to the role of hobbit Frodo Baggins in "".

2003 proved to be a similar year for Wood; after two relatively small jobs (his role credited as 'The Guy' in ' and his stint as First Assistant Director in 's "The Long and Short of It" served purely as a break for Elijah), he starred in "All I Want" and once again resumed his role as Frodo Baggins for ' (2003), the last chapter in Tolkien's trilogy.

Hot on the heels of the trilogy, Wood quickly appeared in his first post-Frodo role in "" (2004), playing an ethically challenged lab technician who helps erase heartbreaking memories but then uses his knowledge of the past relationship of an unknowing former patient (played by ) to woo her. He then had a chillingly silent turn as the cannibalistic, bespectacled serial killer Kevin in director and writer-artist Frank Miller's visually arresting adaptation of Miller's crime noir comic book series "Sin City" (2005), appearing opposite in the segment "". On May 12, 2005 , Wood hosted a program called , when the new was launched. [cite news | url=http://news.bbc.co.uk/1/hi/technology/4539835.stm | title=New Xbox to kick off console wars | publisher=BBC News | date=| accessdate=2006-10-24 ]

Also in 2005, Wood starred in "Everything Is Illuminated", in which he plays a young American man on a quest to find the woman who once saved his grandfather during the Second World War, and "Green Street Hooligans", as an American college student who falls in with a violent English . Both had limited release, but were critically acclaimed.

Wood shot a small part in "", which consists of eighteen 5-minute sections. Each section is directed by a different director. Wood’s section, called "Quartier de la Madeleine", was directed by . The film opened on May 18 at and was shown at . First Look Pictures acquired the North American rights, and the film opened in the US in early 2007. [cite news | url=http://www.ew.com/ew/report/0,6115,1536522_3_0_,00.html | title=First Look Pictures embraced Paris, je t'aime | publisher=Entertainment Weekly | accessdate=2006-10-18 ]

One of his most recent films was 's "Bobby", in which his character gets married to change his draft classification. [cite news | url=http://www.rottentomatoes.com/news/comments/? | title=Weinsteins To Present Estevez's "Bobby" | publisher=rottentomatoes | accessdate=2006-10-18 ] It premiered at the and was released on , in and . Wide release followed on November 23.

In "", [cite news | url=http://movies.about.com/od/moviesinproduction/a/happyfeet033005.htm | title=Elijah Wood and Hugh Jackman Provide Voices of Penguins in "Happy Feet" | publisher=About - News & Issues, NY | date= | accessdate=2006-10-18 ] Wood provided the voice of Mumble, a penguin who can tap dance, but not sing. "" was released on , and has grossed over $380 million dollars worldwide. The movie also received a nomination and won an and a for Best Animated Feature.

Elijah Wood is one of the biggest collectors of music in Hollywood. In 2005 Wood started his own record label called . On September 19, 2006 Wood announced that Simian had signed as their first band, with their new album "" released in February 2007. [cite news | url=http://www.spin.com/features/news/2006/09/060926_applesinstereo/| title=Elijah Wood’s Label | publisher=Spin.com | date= | accessdate=2006-10-18 ] In addition he also directed the music video for "Energy". [cite news | url=http://harpmagazine.com/news/detail.cfm?article=10805 | title=Apples In Stereo, Elijah Wood Make Synergy and Video “Energy”| publisher=Harp Magazine| accessdate=2007-01-19] The other band signed to Simian thus far is . Wood declared he is a big fan of these two bands.Fact|date=January 2008

Wood has signed to co-produce the film "Black Wings Has My Angel", based on the noir novel of the same name, with Anthony Moody and Rob Malkani of Indalo Productions. [ cite news | url=http://www.hollywoodreporter.com/hr/content_display/film/news/e3i24b21916578451e52e9d905fd230d4fa?imw=Y | title=Wood to Produce 'Black Wings' | publisher=hollywood reporter| accessdate=2007-04-18]

Wood likes to keep his personal life away from the media spotlight, and is particularly private about his romantic relationships. In 2005, reported that he is dating 's backup dancer ; the relationship began sometime after they met on the set of "Everything Is Illuminated" in 2004. [cite news | url=http://news.softpedia.com/news/Elijah-Wood-In-Love-9723.shtml | title=Elijah Wood in Love | publisher=Softpedia | date= | accessdate=2007-10-21 ]

In an interview about "Everything Is Illuminated", director commented that Wood has a "generosity of spirit" and a "sincere goodness as a human being." [cite news | url=http://www.imdb.com/title/tt0404030/maindetails | title=Everything Is Illuminated | publisher=IMDB | date= | accessdate=2006-10-18 ] He also has supported several campaigns for charity as [http://www.keepachildalive.org/ Keep a Child Alive] or [http://www.youthaids-aldo.org/ ALDO/YouthAIDS] In addition to charity work, Wood is a known music buff who admits to owning something in the range of 4,000 CDs, and once cited his favorite band as . His personal playlist of favorite songs can be accessed on iTunes. [cite news | url=http://web.archive.org/web/20070127033145/http://hathawaymix.org/elijahwood/music.htm | title=Elijah iTunes Music Picks of 2005 | publisher=Elijah Illusions (via internet archive) | date= | accessdate=2007-09-04 ]

Wood has a of the -mode symbol for "nine" just below his waist on the right side, a reference to his involvement in the Lord of the Rings and the fact that his character was one of the nine members of the Fellowship of the Ring. The other actors of "The Fellowship" (, , , , , , and ) got the same tattoo with the exception of whose stunt double got the tattoo instead.

He smokes - a habit he picked up from his "" co-star . [cite news | url=http://www.studenttimes.org/entertainment/film/wood_inter.html| publisher=studenttimes.org | title= Excerpt: Elijah Wood on the set of his new movie |accessdate=2007-06-08]