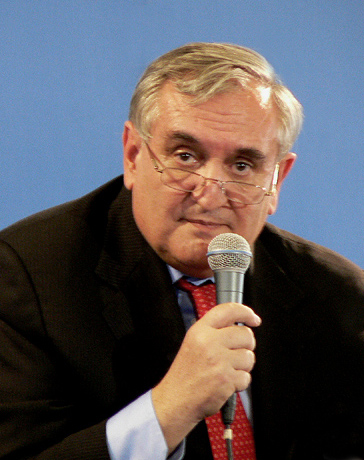 Jean-Pierre Raffarin audio|Fr-Jean-Pierre_Raffarin.ogg|listen (born 3 August 1948) is a French conservative and senator for .

Jean-Pierre Raffarin served as the from 6 May 2002 to 31 May 2005, resigning after France's rejection of the referendum on the European Union draft constitution. However, after Raffarin resigned, he said that his decision was not based on the outcome of the vote. Opinion polls following his resignation suggested that Raffarin was one of France's least popular prime ministers since the Fifth Republic was established in 1958. However, according to the book "France: 1815 - 2003", written by Martin Evans and Emmanuel Godwin, Raffarin was "a remarkably popular prime minister" despite his ability "to state the obvious and to make empty statements".

Raffarin is married to Anne-Marie Perrier (b. 1952 in Chamalières) and has a daughter, Fleur.

He was born in , . He studied law at the and later graduated from the business school. He started his professional career in marketing.

In the 1970s, his first political commitment was in the association of 's young supporters. Defining himself as a "giscardien", he joined the staff of , Secretary of state for Manual Workers and Immigration, and the Republican Party, the liberal-conservative component of the center-right confederation the (UDF).

In the 1980s, he started a career in local politics in region. With the support of , the local political leader, he took the chair of the regional council in 1988. Seven years later, he was elected senator of "département".

During the 1995 presidential campaign, while most UDF politicians supported , he chose the winning candidacy of . In return, he was nominated Minister of Small and Medium-sized Companies, Commerce and Craft Industry in 's cabinet (1995-1997).

At the same time, the pro-Chirac UDF members founded the . Then, he returned in the Republican Party, became Liberal Democracy (DL) in 1997. He was vice-president of DL until 2002.

During the 2002 presidential campaign, he advocated the union of the right behind the incumbent President Chirac. After his re-election, Chirac wished to give a sign of political renewal. Furthemore, elected in a special second round by a majority of left-wing voters, he searched for a moderate to lead the cabinet and the June 2002 legislative campaign. Raffarin participated in the formation of the (UMP).

His political policies combined and moderate economical &mdash; that is, the support of economic policies. In 2003 he launched reforms of the public retirement scheme and of , which led to many strikes. During the summer of 2003 the country experienced an unusual heat wave which caused the death of nearly 15,000 people. The perceived late reaction of the government was blamed on his administration. In 2004 he began a reform of the French state-run health-care system.

Raffarin's governments were known for their internal quarrels with various ministers taking opposite positions in public. The alleged lack of authority of the Prime Minister was mocked by the media.

On 28 March 2004 the ruling UMP party suffered an important defeat during the regional elections, with all but one "région" out of 22 of mainland France going to the opposition (PS, PCF, ). This was generally interpreted, including by Raffarin himself in his post-election speech, as "a sign of distrust against the government from the electorate". On 30 March 2004 Jean-Pierre Raffarin tendered the resignation of his government to president Jacques Chirac, who immediately re-appointed him prime minister, with the delegation to form a new government. This major cabinet reshuffle removed some of its most controversial ministers like (education) or (health).

Raffarin's resignation was accepted by President Chirac on 30 May 2005, after the "no" victory at the referendum, and he was replaced as Prime Minister by .

In September 2004 the US conservative erupted with criticism of when a opinion piece claimed that "" reported that Raffarin said "the Iraqi insurgents are our best allies". There is no trace of this quote in "Le Figaro", and the opinion piece is no longer available from the NYP website. During a state visit to China on 21 April 2005 he avoided opposing the new "anti-secession" law on Taiwan, stating that "The anti-secession law is completely compatible with the position of France" and "The position of France has always been to 'one China' and we will remain attached to this position". On the embargo on weapons, he stated that "France continues to ask for a lifting of the embargo, and does not see what could lead the European Council to change position on that question". [http://sg.news.yahoo.com/050423/1/3s3pn.html] [http://www.phayul.com/news/article.aspx?id=9677&t=1&c=1] By convention, foreign affairs are one of the President's—and not the Prime Minister's—sole responsibilities.

Jean-Pierre Raffarin was often teased for his optimistic s, known colloquially and ironically as "raffarinades", the best known being "La route est droite, mais la pente est forte" ("The road is straight, but the slope is steep"). Some consider that the word "raffarinade" was created in reference to the other French word "mazarinade". However, "mazarinade" refers to the songs that the "frondeurs" (French revolutionaries during the "Régence" of Queen Anne - Archduchess of Austria - and chief minister , before king Louis XIV's personal reign) sang to mock the unpopular chief minister.

Raffarin also tried his English prior to the referendum on the European draft Constitution but this turned out to be an ill-advised idea, as shown in this famous excerpt [http://video.google.com/videoplay?docid=-4118142947508150872&q=raffarin&pl=true] from his speech: "Win the yes need the no to win against the no." The referendum itself was enventually nicknamed "le Raffarindum" by its opponents while is sometimes referred to as "la Saint-Raffarin" by discontented workers (following a decision by Raffarin, French workers are supposed to work on Whit Monday for free).

*Grand-Cross of the of the French Republic (ex-officio) (2002)
*Officer of the (2003) [http://www.ordre-national.gouv.qc.ca/membres/nominations_etrangeres.htm#raffarin]
*Grand Cross of the (2004)