David Winters (born 5 April 1939) is an English-born American dancer, choreographer, producer, director, screenwriter, and actor.[1] Winters has participated in, directed and produced over 400 television series, specials, and motion pictures. Of these, he has directed, produced and distributed over fifty films.

Winters was born David Weizer in London, England, the son of Sadie and Samuel Weizer.[2] His family relocated to the United States in 1953. He became a naturalized United States citizen in 1956.[2] Winters began acting a child, appearing in over a hundred various television roles and commercials including Rock,Rock,Rock![3] before appearing as Baby John in the original Broadway production of West Side Story, he was one of only three Broadway cast members to be cast in the film version.[4][5]

Following his role in West Side Story, Winters played the role of "Yonkers" in Gypsy.[6] 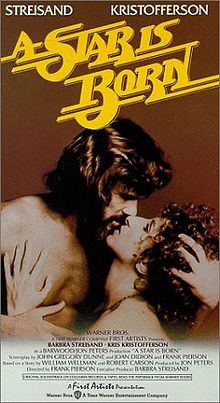 David Winters' choreographed Barbra Streisand in her 1976 film A Star Is Born.

Winters started teaching dance and his students included Teri Garr, who would go on to find success as an Academy Award nominated actress and Antonia Basilotta (better known as Toni Basil), who would become widely known for the 1980s song "Mickey" and Winters would give his students acting and dancing roles in most of the movies and projects he choreographed and they would become known as David Winters and his dancers.[7] [8][9]

Winters went on to appear as a regular singer/dancer and choreographer on Hullabaloo (1965) expanding his previous role on the earlier Shindig! (1964).[10] Under Eugene Louis Facciuto (aka Luigi), Winters was in dance class with Elliott Gould. Additionally, Winters taught dance to world famous actors, such as Ann-Margret, Raquel Welch and Elvis Presley. In addition to a credit as guest star on the 1967 Nancy Sinatra special Movin' With Nancy, the special also featured his choreography and dancing. This project earned him his first Emmy Award nomination. Winters would later team up with regular Hullabaloo director Steve Binder to choreograph dance numbers for the infamous Star Wars Holiday Special. 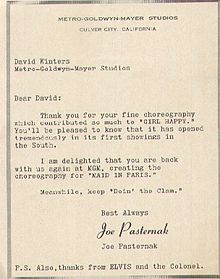 David Winters' Choreography and dancers have contributed significantly to the success of a number of Presley's films.

In addition to dancing, Winters also choreographed many major films, including four Elvis Presley films[11][12][13][14] and later, Barbra Streisand's A Star Is Born (1976).[15][16] Winters often choreographed the productions in which he danced. Winters was nominated for a Special Achievement in Choreography Emmy in 1967, which was unusual, in that choreography was not a category that year. In addition to the Nancy Sinatra special, Winters choreographed and directed two episodes of The Monkees.[17] That show is sometimes considered to have launched the music video as a promotional device. In any case, former Monkee Michael Nesmith went on to be a pioneer in American music videos.[18]

In 1970, Winters teamed up with Raquel Welch with Tom Jones, John Wayne, and Bob Hope for the multi million-dollar TV special Raquel!.[19] Now seen as a classic '70s timepiece, featuring pop-culture icons of the time, the song and dance extravaganza was filmed around the world - from Paris, London to Mexico. Bob Mackie designed costumes in production numbers of songs from the era, and guest performances, including John Wayne and Bob Hope in the wild West, made the show well received by critics. Winters also choreograhphed the '70s roller disco cult classic "Roller Boogie".[20]

In television's early years, Winters appeared in several television episodes, including; The Milton Berle Show, Perry Mason, Suspense, Shindig, Hullabaloo, Lux Video Theatre as well as appearing in some of the specials as a dancer. He was interviewed and appears in the 2005 documentary Inside Deep Throat, discussing his two year affair with Linda Lovelace. He also made an appearance in Linda Lovelace for President.[21][22] Other feature films in which Winters has appeared include The Last Horror Film (1982), Welcome 2 Ibiza (2002), and Blackbeard (2006).

In the late 1960s, Winters began directing beginning with two episodes of The Monkees. He also directed Paul Newman in Once Upon a Wheel, Kirk Douglas in the television adaptation of Dr. Jekyl and Mr. Hyde (1973), as well as the film version of the successful Alice Cooper tour Welcome to my Nightmare (he also served as producer).[23] In the 1980s, he produced, directed, wrote, and co-starred in The Last Horror Film (1982), which he filmed during the Cannes Film Festival and went on to win numerous awards including the Paris Film Festival Award, the Los Angeles Golden Scroll Award and the Sitges Film Festival Award.[24]

Winters' 1986 film Thrashin' remains a seminal piece of work in the board sport industry two decades after its initial release.[25] Mystery Science Theater 3000 chose Winter's 1988 film Space Mutiny as their target for a November 1997 episode. It is available in that series' home video collection (Volume 4), and runs ten minutes shorter than the original due to the deletion of some Battlestar Galactica footage.[26][27]

David's production career began in 1966, when he co-produced the Lucy in London TV special starring Lucille Ball (Lucy was also the Executive Producer of the special), Anthony Newley and the Dave Clark Five and that was sponsored by Monsanto Company. 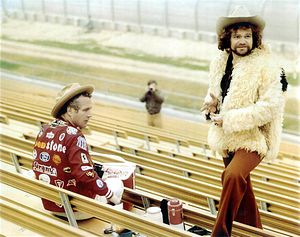 Winters and Newman on set

In 1971 Winters directed and produced Once Upon a Wheel an ABC television documentary on the history of auto racing starring and hosted by Paul Newman co-starring Mario Andretti, Kirk Douglas, Hugh Downs, Dean Martin, Cesar Romero, Dick Smothers and many others. Coca-Cola sponsored the show.

In the 1970s, in addition to the Raquel Welch special, Winters won a Peabody Award for producing the 1972 NBC special The Timex All Star Swing Festival.[28] In 1975, he produced the soft-core film Linda Lovelace for President[29][30] and Young Lady Chatterly. Winter's two-year affair with Lovelace has been linked to her desire for a Vegas career.[21][22] In 1978, in a jam-packed Universal Amphitheatre (now the Gibson Amphitheatre), fans of Diana Ross, were treated to a concert spectacular, conceived and executed by Winters.[31]

1986 was a turning point for Winters.

After being over-ruled on a casting decision for Thrashin', Winters made the professional decision to control all aspects of future projects. Josh Brolin was ultimately cast, but Winters' choice was a pre-21 Jump Street Johnny Depp.[32][33]

The 1991 film Raw Nerve featured the unlikely film paring of Glenn Ford, in his last film role, with that of an adult film actress Traci Lords.[34]

In 1994, David Winters cast Pamela Anderson in her first starring role in Raw Justice also known as Good Cop, Bad Cop, a film produced by Winters in which she costarred with Stacy Keach, David Keith and Airplane! star Robert Hays. The film won the Bronze Award at the Worldfest-Charleston in the category for dramatic theatrical films under the title Good Cop, Bad Cop. The notable cast was the focus of many reviewers. [35] [36]

Action International Pictures was organized by Winters with partners David A. Prior and Peter Yuval, in 1986, the same year as the Thrashin' Incident. Winters bought out his partners in AIP in 1992 and re-branded it as West Side Studios. In 1999 Winters and his British business partner Patrick Meehan took their Equator Films public,[37] in 2004 that company purchased HandMade Films.[38] His current American production entity is known as Alpha Beta Films International.

In Thailand, Winters is currently building a large movie studio with acclaimed film director Oliver Stone which has been dubbed by the press Ollywood.[39][40][41][42]

"Quite possibly the worst science fiction/space adventure film made in English... Even the horrendously bad Shape Of Things To Come (1979) can't aspire to such depths of total putrescence. I speak of the notorious Made-In-South Africa Space Mutiny".[45][46]