Decebalus or "The Brave" (originally named Diurpaneus)[1] was a king of Dacia (ruled the Dacians 87–106)[2] and is famous for fighting three wars and negotiating two interregnums of peace[2] without being eliminated[3] against the Roman Empire under two emperors.[1] In the later short peace (end of 102-105) granted by Trajan, Decebalus continued to act as an independent king,[4] rather than a conquered client and repeatedly annoyed or infuriated the Romans.

Consequently, the Legions under Trajan's orders went on the offensive again in 105 AD, reducing the Dacian capital Sarmizegetusa in 106.[4] After that, Decebalus committed suicide.

After the death of Great King Burebista, Dacia split into four then five smaller states. The situation lasted until Diurpaneus managed to consolidate the core of Dacia around Sarmizegetusa, in today's Hunedoara county. Though not yet king, he reorganized the Dacian army, which in 85 began minor raids upon the heavily fortified Roman province of Moesia, located south of the Danube under Dacian king Duras.

In 86, the Duras ordered a more vigorous attack south into Roman province of Moesia. Emperor Domitian personally advanced into the province with legions and relief supplies, reorganized it, and planned an attack into Dacia the next campaign season. It did not turn out well.

In 87, Emperor Domitian sent his prefect of the Praetorian Guards, Cornelius Fuscus, to punish the Dacians. His four or five legions suffered a major defeat when ambushed by the forces of Diurpaneus.[1] Two Roman legions (among which was the V Alaudae) were ambushed and defeated at a mountain pass the Romans called Tapae (widely know as the Iron Gates along what is the modern Romania-Serbia border). Fuscus was killed. Diurpaneus dubbed himself Decebalus, meaning "with the strength of ten [men]"[5] or simply "The Brave,"[1] and was crowned king.

Regarding the Domitian wars Dio Cassius described Decebalus as follows:

In 88, Tettius Iulianus commanded another Roman army under Domitian against the Dacians, who defeated the Romans at the Second Battle of Tapae. Since German revolts along the Rhine were requiring augmented military force in Moesia, the Romans were compelled to pay large sums in tribute to the Dacians for maintaining peace. This humiliating situation lasted until Trajan became Emperor in 98. Immediately he began preparations for wars that would expand the Roman Empire to its maximum extent.

Decebalus was defeated by the Romans when they invaded Dacia beginning March 25, 101 AD,[7] again in the fortifications of Tapae. After accepting harsh peace conditions including losses in territory,[3] he was left as a client king under a Roman protectorate and a small local garrison.

Three years later, Decebalus destroyed the small Roman garrison in Dacia, and the Romans were forced again to send reinforcements, and this time Trajan decided to definitively conquer Dacia.

After a long siege of the Dacian Capital, Sarmizegetusa and a few skirmishes in the greater region, the Romans conquered Dacia. Decebalus managed to escape with his family. 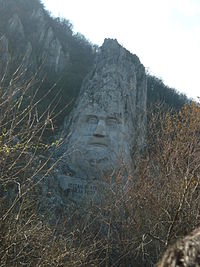 Hunted, having his army defeated and finally cornered by Roman detachments seeking his head, rather than being captured to be exhibited and humiliated at Rome, Decebalus committed suicide by slashing his own throat, as depicted on Trajan's Column (spiral 22, panel b).

It is likely, however, that in the process of dying, Decebalus was captured by a Roman cavalry scout named Tiberius Claudius Maximus from Legio VII Claudia as is claimed on the funerary stele discovered at Gramini in Greece. His head and right hand were then taken to Trajan in "Ranisstorium" (an unidentified Dacian village, perhaps Piatra Craiului) by Claudius Maximus when he was decorated by the emperor, and the trophy sent to Rome where it was thrown on the Gemonian stairs.[8] Tiberius Claudius Maximus' tomb cites two occasions where the legionary was decorated for his part in the Dacian wars, one of which being the acquisition and recovery of Decebalus' head.[9]

Decebalus is considered a national hero in Romania and has been portrayed in numerous literary works, movies (e.g. Dacii, directed by Sergiu Nicolaescu), sculptures, etc. His first known portrait has been preserved on Trajan's Column, the commemorative stone column completed in 113. Trajan's Column depicts the key moments of the last two wars between Dacia and the Roman Empire in carved bas relief. During the 1990s, a team of sculptors carved a 40-meter tall statue of Decebalus from a stone outcrop near the city of Orşova, Romania.