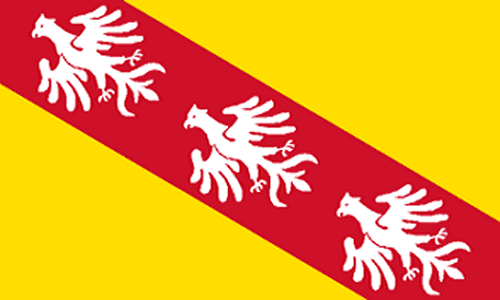 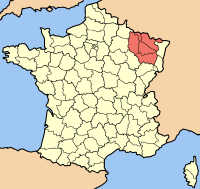 Lorraine ( _de. Lothringen) is one of the 26 "régions" of . It is the only administrative region with two cities of equal importance, Metz and . is considered to be the official capital since that is where the regional parliament is situated. The region's name is derived from the medieval .

It is important to note that the current "région" of Lorraine is larger than the historical which gradually came under French sovereignty between 1737 and 1766. The modern "région" includes provinces and areas that were historically separate from the duchy of Lorraine proper. These are:
*
* : non-contiguous territories around , , and which were detached from the in the 16th century and came under French sovereignty.
* several small principalities which were still part of the at the time of the .

The case of Barrois is the most complicated: the western part of Barrois (west of the ), known as Barrois mouvant, was detached from the rest of Barrois in the early 14th century and passed under French sovereignty. On the other hand, the largest part of Barrois (east of the Meuse River) was a duchy () part of the and united with the duchy of Lorraine in the 15th century by the marriage of the Duke of Bar, , with the daughter of the Duke of Lorraine, Isabella. Thus the duchies of Bar and Lorraine were united in under the same duke, although formally they kept separate existence until their incorporation into France in 1766.

During the , four "départements" were created on the main parts of the territories of Barrois, Three Bishoprics and the Duchy of Lorraine: "", "", "" and "". After 1870 some parts of "Moselle" and "Meurthe" became German and the parts that stayed French formed the new . After 1918 "Moselle" became French again.

When the French "régions" were created in the middle of the 20th century, it was decided to gather "Meurthe et Moselle", "Meuse", "Moselle" and "Vosges" into a single "region", simply called "Lorraine".

experienced great prosperity during the 12th and 13th centuries under the emperors, but this prosperity was terminated in the 14th century by a series of harsh winters, bad harvests, and the . During the , prosperity returned to Lothringia under administration, until the devastated large parts of southern . Most of Elsaß was ceded to France at the in 1648, which marked its start, along with , as a contested territory between France and Germany (French-German enmity). In which from 1871 until 1918 a large part of the region was part of the as the Imperial Province .

Lorraine is the only French region to have borders with three other countries: (), , and Germany (, ). It also borders the French regions of , Alsace, and . The location of Lorraine led to it being seen as a strategic asset and as the crossroads of four nations, it had a very important role in European affairs. Many rivers run through Lorraine, including the , , , and [Meuse] .

Most of Lorraine has a clear French identity. For this reason, Bismarck only annexed about a third of today's Lorraine to the German Empire following the . The disputed third, known as , had a culture not easily classifiable as either French or German, possessing both Romance and Germanic dialects. Like many border regions, Lorraine was a patchwork of ethnicities and dialects, sometimes not even mutually intelligible with either French or German.Fact|date=February 2007

Despite the French government's "single language" policy, local Germanic dialects still survive in the northern part of the region. They are known as a whole as in English, "francique" or "platt (lorrain)" in French (not to be confused with "lorrain", the Romance dialect spoken in the region). These dialects are distinct from the neighbouring , to the south, although the two are often confused. Neither has any form of official recognition. Historically, there are two dialect familiies spoken in Germanic Lorraine. Both Moselle and Lorraine Franconian are spoken in the region. They are similar to the dialects native to the neighboring west central German dialects spoken in Luxembourg and Germany.

Like most of France's regional languages (such as Breton, the dialect of Dutch, , and Alsatian), Lorraine and Moselle Franconian German have been largely replaced by French since the advent of mandatory public schooling in the 19th and 20th centuries. However, there are efforts underway to preserve the dialects and many older people still speak them.

During World War II, the cross was adopted as the official symbol of the (French: "Forces Françaises Libres", or FFL) under .

The "capitaine de corvette" suggested the adoption of the as the symbol of the Free French, both to recall the perseverance of (whose symbol it had been), and as an answer to the .

In his General Order n° 2 of , vice-admiral , then chief of the naval and air forces of the Free French for only two days, created the bow flag displaying the French colours with a red Cross of Lorraine, and a also featuring the Cross of Lorraine.

Appropriately, de Gaulle is memorialised by a gigantic 43-meter high Cross of Lorraine at his home village of .

The cross was also carried on the fuselages of aircraft flying on behalf of the "" (FAFL) from 1940 to 1943 to distinguish them from the aircraft of the Vichy French air force, which continued to sport the traditional roundels of the ("Armée de l'Air"), dating from .

The Cross of Lorraine was later adopted by Gaullist movements such as the (RPR).

Traditional dishes in the region include:

*
* Pâté lorrain (chopped pork and veal flavoured with white wine and baked in puff pastry)
* Potée lorraine (a stew of smoked meats and sausages, with cabbage and root vegetables)
* ( sausage)

* Wine: The most well-known wine of the region is the of . There are vineyards in the valley of the Moselle, the valley of , the valley of Metz, and the valley of .
* Beer: Historically, Lorraine was the location of many breweries, including the Champigneulles, Vézelise, Tantonville, Ligny-In-Barrois, Uckange, and Metz.Today, many of these breweries have closed down, but there are still breweries operating in the region, including Les Brasseurs de Lorraine in Pont-à-Mousson. Two breweries, in and Stenay, have become museums.

With 44 billion s, Lorraine generates 3.4% of France's GDP, and ranks 8th out of the 22 regions of France.Fact|date=February 2007 The and service sectors have experienced the strongest growth in recent years while the traditional industries (, , ) have experienced a decline and consequently the region has experienced a major difficulty with a rising unemployment rate that is near the national average. In 1997 the last mine in Lorraine, which once produced over 50 million tonnes of iron, was closed. [ [http://minerals.usgs.gov/minerals/pubs/commodity/iron_ore/340497.pdf Iron Ore in 1997 ] ]