This article covers adoption of the by homes, organizations, companies, and governments. Linux migration is the change from using other operating systems to using Linux.

Although Linux status as mainstream operating system is relatively recent, it has already been adopted in several different scenarios throughout the home, business, and government.

Linux's roots in the operating system mean that in addition to graphical configuration tools and control panels available for many system settings and services, it is often easier or necessary to use plain-text configuration files to configure the OS. While user access to these files and utilities is controlled by the system administrator, and in theory the user does not need to worry about them, in practice administrators and user are often the same person on a desktop system.Fact|date=October 2007

As s come under pressure from institutions such as the and the , some have turned to open source software as an affordable, legal alternative to both pirated material and expensive computer products from , Apple and the like (see below).The spread of free software affords some leverage for these countries when companies from the developed world bid for government contracts (since a low-cost option exists), while furnishing an alternative path to development for countries like India and Pakistan that have many citizens skilled in computer applications but cannot afford technological investment at "First World" prices.
* 's program
* City of has chosen to migrate its 14,000 desktops to -based [ [http://news.zdnet.co.uk/0,39020330,39195204,00.htm Munich picks its Linux distro - ZDNet UK ] ]
* The uses and develops open source softwareFact|date=December 2007
* The city of has chosen to start migrating its desktop PCs to Debian-based [ [http://news.zdnet.co.uk/software/linuxunix/0,39020390,39185440,00.htm Vienna to softly embrace Linux - ZDNet UK ] ]
* has been noted as the furthest along the road to Linux adoption [ [http://lwn.net/Articles/41738/ Linux in Spain [LWN.net ] ] , for example with
* State owned (ICBC) is installing Linux in all of its 20,000 retail branches as the basis for its web server and a new terminal platform. (2005) [ [http://informationweek.com/story/showArticle.jhtml?articleID=170700943 Microsoft Fights Piracy In China, Linux Wins - Linux - InformationWeek ] ]
* In 2005 the voted to adopt open source across all its bodies. [ [http://www.theregister.co.uk/2005/09/29/peru_goes_open_source/] ] The 2002 response to Microsoft's critique is available online.::In the preamble to the bill, the Peruvian government stressed that the choice was made to ensure that key pillars of were safeguarded: "The basic principles which inspire the Bill are linked to the basic guarantees of a state of law."

Linux is often used in technical disciplines at universities and research centres. This is due to several factors, including that Linux is available free of charge and includes a large body of free/open source software. To some extent, technical competence of computer science and software engineering academics is also a contributor, as is stability, maintainability, and upgradability. ran an advertising campaign entitled "Linux is Education" featuring a young boy who was supposed to be "Linux". [ [http://youtube.com/watch?v=EwL0G9wK8j4 YouTube - IBM Linux ad: Prodigy ] ]

Examples of large scale adoption of Linux in education include the following:
* The (previously called the MIT $100 laptop and The Children's Machine), is an inexpensive laptop running Linux, which will be distributed to millions of children as part of the project, especially in developing countries.
* deployed 5,000 Linux desktops running Ubuntu across all 468 public schools and 182 computer labs (December 2005). Later in 2007, another 180,000 Ubuntu running, thin client computers were deployed. [ [http://gnomejournal.org/article/33/macedonia-deploys-5000-gnome-desktops-in-public-schools The GNOME Journal: Macedonia Deploys 5,000 GNOME Desktops in Public Schools ] ] [http://www.ubuntu.com/news/macedonia-school-computers]
* Schools in , have switched to a custom distribution of Linux (), which will be used by the 16,000 students in the area when they return on . [ [http://www.fuss.bz.it/ Benvenuti in FUSS! | FUSS ] ]
* has around 20,000 Linux desktops running in elementary and secondary public schools.Fact|date=December 2007
* has an initiative called "Open Source en standaarden in het onderwijs", "Open source and standards in education". [ [http://www.ossinhetonderwijs.nl/ OSS in het Onderwijs :: Goed bekeken! ] ]
* Government officials of , announced they will use only free software, running on the Linux platform, for computer education, starting with the 2,650 government and government-aided high schools. [ [http://www.rediff.com/money/2006/sep/02microsoft.htm Kerala logs Microsoft out of schools ] ]
* 22,000 students in the US state of had access to Linux Workstations at their high schools in 2006. [ [http://www.crn.com/sections/breakingnews/breakingnews.jhtml?articleId=192201386 Hoosier Daddy? In Indiana Schools, It's Linux - Software - IT Channel News by CRN and VARBusiness ] ]
* has announced that 560,000 students in 33 universities will migrate to Linux. [ [http://www.computerweekly.com/Articles/2007/08/28/226420/german-universities-migrate-to-linux.htm German universities migrate to Linux | 28 Aug 2007 | ComputerWeekly.com ] ]
* has deployed 13,000 desktops of , the first 10,000 where delivered in December 2007 by . Another 10,000 desktops of and are planned. [ [http://www.computerworld.com.au/index.php/id;1163450117;pp;1 Computerworld - 23,000 Linux PCs forge education revolution in Philippines ] ]
* announced in October 2007 that all its school computers will run on Linux. [http://news.bbc.co.uk/1/hi/technology/7034828.stm Russia to use Linux in schools] This is to avoid cost of licensing current unlicensed software.
* 9,000 computers to be converted to Linux and OpenOffice.org in school district , by September 2008 [ [http://www.tdg.ch/pages/home/tribune_de_geneve/l_actu/sciences_hi_tech/detail_hi_tech/(contenu)/211880 Tribune de Genève - Page détail - INFORMATIQUE - Le DIP met le cap sur les logiciels libres ] ]
* An n state plans to distribute 100,000 Linux laptops to its students.

Linux is also used in some corporate environments as the desktop platform for its employees, with commercially available solutions including , , and .

There are many driving forces behind Linux adoption by various individuals and organizations, including security and stability, innovation and flexibility, empowerment of the skilled programmer and cost savings in development and deployment.
* economic reasons such as:
** avoidance of anti-competitive practices like vertical tying and
** free market advantages, such as competition in cost, feature set and flexibility. For example, a high-quality specialized platform in place of a one-size-fits-all mass produced product.
** avoiding costs of inefficient markets: for example, in the Microsoft line of software and operating systems, a lot of basic infrastructure and functionality is removed or disabled in the entry-level product and reserved for premium lines, future releases or for partnership products.
** lower cost of deployment and development - in linux, an expert programmer/administrator can quickly develop software using a wide variety of interlocking tools and automate its administration without worrying about whether several basic systems work together, have been purchased or have been relicensed. In contrast the Microsoft platform introduces several strategic obstacles precipitating the purchase of a variety of isolated, specialized tools/products, and generally favors the far more populous point and click non-expert with an attendant reduction in labor-productivity for experts. (e.g. even the c compiler is a multi-hundred dollar product optimized for ease-of-use to the non-expert at the expense of lesser productivity for the expert, and there are many costs and obstacles thereafter - all of which can be solved by money, but not by expertise)
** cost resulting from broken paradigms: for example, in *nix several programs written in several different languages can be effortlessly combined on the command line and in scripts facilitating rapid, low-cost development (the bulk can be developed in shell, and parts optimized in c). Likewise the *nix shell offers significant leverage of existing components (the shell is a capable programming environment in itself - unlike DOS). Microsoft broke that paradigm in DOS and even in Vista there is still no such built in, natural, easy to use facility - there are facsimiles such as VBS, but they are more cumbersome, and less capable - for example lacking redirection and access to GUI-only functionality (thereby, making automation impossible in many cases). Incompatible, proprietary file formats represent a similar set of obstacles and costs.
* Knowing how programs work and what they do with the user's data
* Freedom from - data can usually be ported more easily because there is often less incentive to make this difficult than with .
* Long-term usability (reduction in duplication and built in ) - open source software packaged with Linux usually lasts longer because repeated rollouts and "must have" updates are not part of the marketing model.
* Low cost - popular Linux distributions are available as a free download over the Internet, while Windows, depending on version and how it is purchased, costs from US$199 to US$299 per seat. Mac OS X costs US$129 per seat, or US$199 the family pack (5 licenses), and runs only on Apple hardware.
* Core packages run across more platforms, and are often more standards compliant and interoperable. Major proprietary software tends to comply and interoperate only with its own manufacturer's software, and is often hard to port to other platforms or systems.
* At a professional level, Linux is configurable and robust.
* Many of its core services, including expandability, and functions such as clustering, stability, and -creation, are easier with Linux than many alternative common systems.
* Upgrades are issued and problems are fixed more quickly.
* Other factors include the large number of languages Linux's interfaces are available in, the flexibility to customise it to local needs, and high quality remote management.
* The use of Linux on desktop PCs in corporations is being driven by employees requesting it, and by corporations seeing competitors successfully deploying Linux. [ [http://www.desktoplinux.com/news/NS5481370522.html OSDL shares Desktop Linux survey results ] ]
* In government, self-determination and vendor independence are valued, as well as the local software industry development that may surround the adoption of Linux.
* In the , recent agreements have encouraged organizations to consider Linux as an alternative to using copyright-infringing software.

Companies adopt Linux and :
* Because it is the dominant trend in software production
* To cause market disruption
* Because customers demand it
* To move the value-adding to different areas.

The unavailability of can be a reason for Linux migration.

51% of respondents to the 2006 Linux Foundation survey believed that cross-distribution Linux desktop standards should be the top priority for the Linux desktop community, highlighting the fact that the fragmented Linux market is preventing application vendors from developing, distributing and supporting the operating system.In 2008, reported that "version control and incompatibilities will continue to plague open-source OSs and associated middleware."

Availability and quality of open source s have long been issues for Linux desktops. Particular areas which are seen as needing attention are drivers for printing, wireless support, and audio.

Compared to Windows, Linux is lacking in end-user support. Linux has traditionally been seen as requiring much more technical expertise.

Linux's credibility has also been under attack.

Linux became popular in the market particularly due to the LAMP software bundle.

Linux is often used in various single- or multi-purpose s and . [ [http://linuxdevices.com/articles/AT4936596231.html The Linux Devices Showcase ] ] 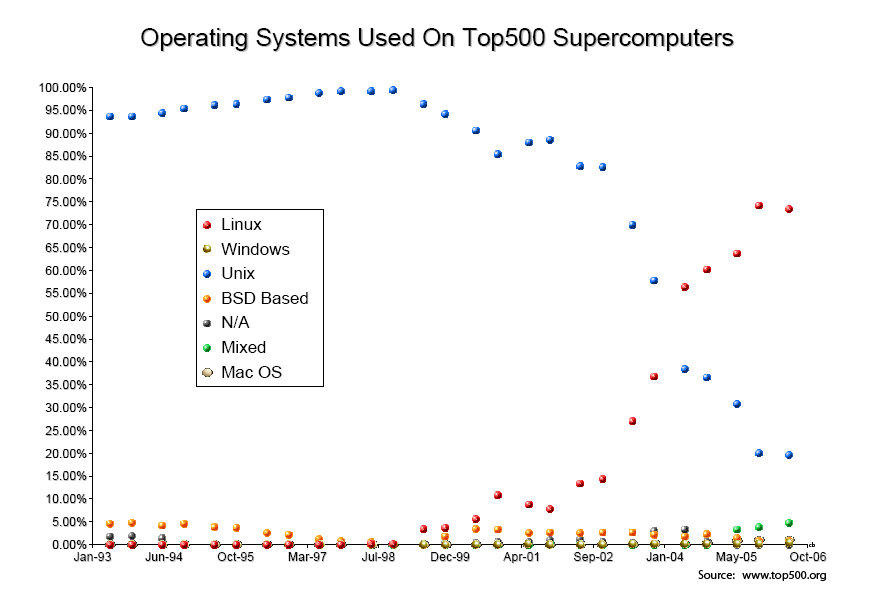 *
*
*
*
*Comparison of
**Open source and closed source
**Windows and Linux