Situated in Paris, with its own secretariat of 145 staff, the Bank is a separate legal entity and is autonomous in its decision-making. It has consistently enjoyed an AAA credit rating from Moody's and Standard and Poor's [2].

The original aim was to help refugees and other displaced persons after the Second World War. It later expanded its scope of activities to include assistance to disaster victims, help with job creation, and improve social infrastructure. Its aim today is to promote social cohesion in its member states.

The CEB acts as a development bank, granting loans to member States. In 2007, its assets stood at 18.5 billion euros, which it uses to co-finance projects by means of loans of up to 40% of the project cost. The current governor is Raphaël ALOMAR, born in 1941, of French nationality.

In September 2008 the Bank's Administrative Council approved a donation for Georgia for 1 million euros for those affected by the 2008 South Ossetia war.

There are currently 40 member States, as follows: 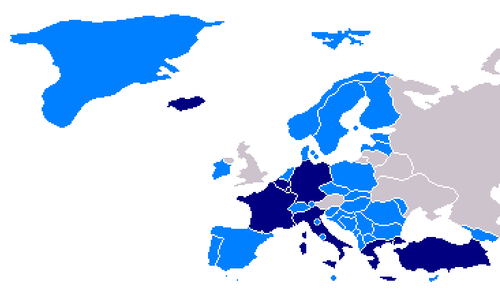 Map of the member States.

The only member State that is a Council of Europe "non-member" is the Holy See.