The Spring and Autumn Period (simplified Chinese: 春秋时代; traditional Chinese: 春秋時代; pinyin: Chūn qiū shí dài) was a period in Chinese history that roughly corresponds to the first half of the Eastern Zhōu Dynasty (from 771 to 476 BC, although 403 BC is sometimes also considered the end of the period.[1]) in the alluvial plain of the Yellow River, the Shandong Peninsula and the river valleys of the Huái and Hàn.[2] ). Its name comes from the Spring and Autumn Annals, a chronicle of the state of Lǔ between 722 and 479 BC, which tradition associates with Confucius. The period can also be further divided into three sub-periods:[3][4]

During the Spring and Autumn period, China's feudal system of fēngjiàn became largely irrelevant. The Zhōu Dynasty kings held nominal power, but only had real control over a small royal demesne centered on their capital Luò yì.[5] During the early part of the Zhōu Dynasty period, royal relatives and generals had been given control over fiefdoms in an effort to maintain Zhōu authority over vast territory,[6] many of these broke up into smaller states when the dynasty weakened.

The most important feudal princes (known later as the twelve vassals), met during regular conferences where important matters, such as military expeditions against foreign groups or offending nobles, were decided. During these conferences, one vassal leader was sometimes declared hegemon[7] and given leadership over the armies of all Zhōu states.

As the era unfolded, larger and more powerful states annexed or claimed suzerainty over smaller ones. By the 6th century BC, most small states had disappeared and only a few large and powerful principalities dominated China. Some southern states, such as Chǔ and Wú, claimed independence from the Zhōu. Wars were undertaken to oppose some of these states (Wú and Yuè).

Amid the interstate power struggles, internal conflict was also rife: six elite landholding families waged war on each other in Jìn; the Chen family was eliminating political enemies in Qí; and legitimacy of the rulers was often challenged in civil wars by various royal family members in Qín and Chǔ. Once all these powerful rulers had firmly established themselves within their respective dominions, the bloodshed focused more fully on interstate conflict in the Warring States Period, which began in 403 BC when the three remaining elite families in Jìn – Zhào, Wèi and Hán – partitioned the state.

Beginning of the Eastern Zhōu Dynasty

After the Zhōu capital was sacked by the Marquess of Shēn and Quǎnróng barbarians, the Zhōu moved the capital east from the now desolated Zōngzhōu,[8] to Chéngzhōu, in the Yellow River Valley. The Zhōu royalty was then closer to its main supporters,[9] particularly Qín, Jìn, and Zhèng;[10][11] the Zhōu royal family had much weaker authority and relied on lords from these vassal states for protection, especially during their flight to the eastern capital. In Chéngzhōu, prince Jī Yíjìu was crowned by his royal supporters as King Píng of Zhōu.[12] However, with the Zhōu domain greatly reduced to Chéngzhōu and nearby areas, the court could no longer support six groups of standing troops as it had in the past; Zhōu kings had to request help from neighbouring powerful states for protection from raids and for resolution of internal power struggles. The Zhōu court would never regain its original authority; instead, it was relegated to being merely a figurehead of the feudal states. Though the king de jure retained the Mandate of Heaven, the title held no actual power.

With the decline of Zhōu power, the Yellow River drainage basin was divided into hundreds of small, autonomous states, most of them consisting of a single city, though a handful of multi-city states, particularly the four that surrounded the others, had power and opportunity to expand outward.[13] A total of 148 states are mentioned in the chronicles for this period, 128 of which were absorbed by the four largest states by the end of the period.[14]

While the Zhèng rulers initially supported the Zhōu royalty, relations soured enough that Duke Zhuāng of Zhèng (757–701 BC) raided Zhōu territory in 707 BC, defeating King Húan's army in battle and injuring the king himself;[15][16] the display of Zhèng's martial strength was effective until succession problems after Zhuāng's death weakened the state.[17] 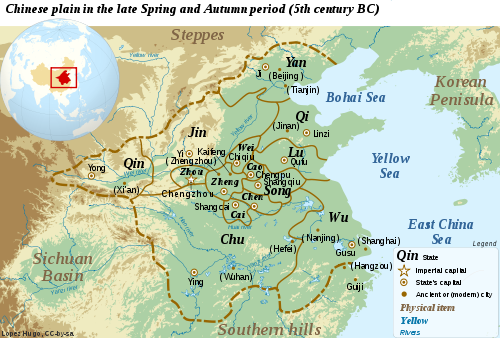 Late Spring and Autumn Period, 5th centry BC, before the breakup of Jin and the Qin move into Sichuan. The Wei on this map is Wey, not the other Wei that arose from the Partition of Jin
Main article: Interstate relations during the Spring and Autumn period

Shortly after the royal family's move to Chéngzhōu, a hierarchical alliance system arose where the Zhōu king would give the title of hegemon or bà to the leader of the state with the most powerful military; the bà was obligated to protect both the weaker Zhōu states and the Zhōu royalty from the intruding non-Zhōu peoples:[18][19] Northern Dí, Southern Mán, Eastern Yí and Western Róng. This political framework retained the fēngjiàn power structure, though interstate and intrastate conflict was characterized by a disregard for feudal customs, respect of the Jī family, or solidarity with other Zhōu peoples;[20] because it was given through the king, military leadership garnered legitimacy useful in mobilizing interstate military ventures designed to protect Zhōu territory, including smaller states that would be otherwise taken over by "barbarians."[21]

Over the next two centuries, the four most powerful states—Qín, Jìn, Qí and Chǔ—competed with each other for power. Amid rapid expansion[22] and low-level warfare, interstate diplomacy was also commonly used to solidify alliances not based on kinship and to sanction legal agreements made between states.[23] These multi-city states also used the pretext of aid and protection to intervene and gain suzerainty over the smaller states.

Because of Chǔ's non-Zhōu origin, its rulers, beginning with Mǐ Xióng Tōng in 704 BC, proclaimed themselves kings and the state was considered Mán or barbarian. Chǔ intrusion into Zhōu territory was checked several times by the other states, particularly in three major battles: the Battle of Chéngpū (632 BC), the Battle of Bì (595 BC) and the Battle of Yānlíng (575 BC); this resulted in the restorations of the states of Chén and Cài.

The first bà was Duke Huán of Qí (r. 685-643 BC). With the help of his minister, Guǎn Zhòng, Duke Huán reformed Qí to centralize its power structure. The state consisted of 15 xiāng with the duke and two senior ministers each in charge of five xiāng; military functions were also united with civil ones. These and other related reforms provided the state, already powerful from control of locations important to interstate trade, with a greater ability to mobilize resources than other, more loosely organized states.[24] By 667 BC, Qí had clearly shown its economic and military dominance over other states and Duke Huán assembled the leaders of Lǔ, Sòng, Chén, and Zhèng, who elected him leader over them. Soon after, King Hùi of Zhōu gave him the official title of bà, giving Duke Huán royal authority in military ventures.[25][26] 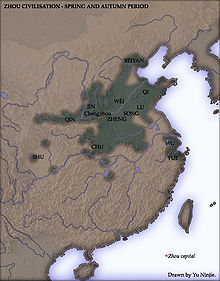 Urbanisation during the Spring and Autumn period.

At his death in 643 BC, five of Duke Huán's sons contended for the throne, causing enough state discord that the next Duke of Qí did not inherit the bà title. For nearly ten years, no ruler held the title.[28] However, when Duke Wén of Jìn (r. 636–628 BC) came to power, he capitalized on the reforms of his father, Duke Xiàn of Jìn (r. 676–651 BC), who had centralized the state, killed off relatives who might threaten his authority, conquered sixteen smaller states, and even absorbed some Róng and Dí peoples to make Jìn much more powerful than it had been previously.[29] When he assisted King Xīang of Zhōu in a succession struggle in 635 BC, the King awarded Jìn with strategically valuable territory near Chéngzhōu.

Duke Wén of Jìn then used his growing power to coordinate a military response with Qí, Qín, and Sòng against Chǔ, which had begun encroaching northward after the death of Duke Huán of Qí. With a decisive Chǔ loss at the Battle of Chéngpū (632 BC), Duke Wén's loyalty to the Zhōu king was soon rewarded at an interstate conference when King Xīang awarded him the title of bà.[30] 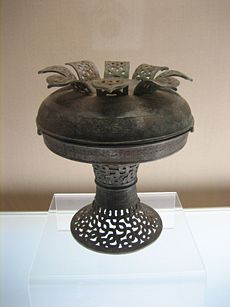 After the death of Duke Wén in 628 BC, a growing tension manifested in interstate violence that turned smaller states, particularly those at the border between Jìn and Chǔ, into sites of constant warfare; Qí and Qín also engaged in numerous interstate skirmishes with Jìn or its allies to boost their own power.[31]

After a period of increasingly exhaustive warfare, Qí, Qín, Jìn and Chǔ met at a disarmament conference in 579 BC and agreed to declare a truce to limit their military strength.[32] While this peace didn't last very long, it soon became apparent that the bà role had become outdated; the four major states had each acquired their own spheres of control and the notion of protecting Zhōu territory had become less cogent as the control over (and the resulting cultural assimilation of) non-Zhōu peoples, as well as Chǔ's control of some Zhōu areas, further blurred an already blurry distinction between Zhōu and non-Zhōu.[33] In addition, new aristocratic houses were founded with loyalties to powerful states, rather than directly to the Zhou kings, though this process slowed down by the end of the seventh century BC, possibly because territory available for expansion had been largely exhausted.[34] The Zhōu kings had also lost much of their prestige[35] so that, when Duke Dào of Jìn (r. 572–558 BC) was recognized as bà, it carried much less meaning than it had before.

At the same time, internal conflicts between state leaders and local aristocrats occurred throughout the region. Eventually the dukes of Lǔ, Jìn, Zhèng, Wèi, and Qí became figureheads to powerful aristocratic families.[36]

Rise of Wú and Yuè

Amid conflict between Jìn and Chǔ, two coastal states with dubious Zhōu ties, Wú[37] and Yuè,[38] grew in power as they gained relevance in interstate affairs.[39][40] Starting around 583 BC, Jìn used aid to solidify an alliance with Wú, which then acted as a counterweight to Chǔ so that, while Jìn and Chǔ agreed to a truce in 546 BC to address wars over smaller states, Wú maintained constant military pressure on Chǔ and even launched a devastating full-scale invasion in 506 BC.[41]

When the king of Wú died during an invasion of Yuè (496 BC), his son, King Fuchāi of Wú nearly destroyed the Yuè state, defeated Qí, threatened Jìn. In 482 BC, King Fuchāi held an interstate conference to solidify his power base, but Yuè captured the Wú capital. Fuchāi rushed back but was besieged and died when the city fell (473 BC). Yuè then concentrated on weaker neighboring states, rather than the great powers to the north.[42]

After the great age of Jìn power, the Jìn dukes began to lose authority over their nobles. A full-scale civil war between 497 and 453 BC ended with the elimination of most noble lines; the remaining aristocratic families divided Jìn into three successor states: Hán, Wèi, and Zhào.[43]

With the absorption of most smaller states in the era, this partitioning left seven major states in the Zhōu world: the three fragments of Jìn, the three remaining great powers of Qín, Chǔ and Qí, and the weaker state of Yān near modern Beijing. The partition of Jìn marks the beginning of the Warring States Period.

A total of 148 states are mentioned in the chronicles for this period.[44]

States of the Spring and Autumn Period 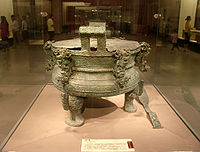 A large bronze tripod vessel from the Spring and Autumn Period, now located at the Henan Museum