The Nariman House (Marathi: नरीमन हाउस), renamed[1][2][3] as Chabad House (Hebrew: בית חב"ד‎ Beit Chabad), is a five-story landmark in the Colaba area in southern Mumbai, India.[1] The building was home to a Chabad house, a Jewish outreach center run by Gavriel and Rivka Holtzberg, and they have owned the Building since around 2006. The center had an educational center, a synagogue, offered drug prevention services,[4][5][6][7][8] and a hostel.[9][10] The building was attacked and six of its occupants, including Rabbi Gavriel Noach Holtzberg and his wife, Rivka, who was five months pregnant, were killed during the November 2008 Mumbai attacks by Pakistani Islamic terrorists. Their two-year-old son Moshe survived the attack after being rescued by his Indian nanny, Sandra Samuel.

The Chabad House, located at 5 Hormusji Street, Colaba,[11] is one of eight synagogues in Mumbai[12] and has been described as the epicentre of the Jewish community in the city.[13]

This Chabad House is one of 4,000 such houses in 73 countries, typically run by husband-and-wife couples.[14] In 2003, this Chabad House, the first in Mumbai, was opened by Rabbi Gavriel and Rivka Holtzberg, newly married, and until the November 2008 Mumbai attacks was run by them.[14] It catered to Israelis who are on their way to "party hotspots" such as Goa and Rajasthan,[15] in addition to the city's local Jewish community and traveling Jewish businessmen.[16] The Holtzbergs also ran a synagogue and taught Torah classes, in addition to the rabbi conducting weddings for local Jewish couples. It is the Chabad headquarters for Mumbai.[16] The place was open to anyone who wanted a place to pray, eat kosher food or celebrate Jewish holidays. In a film in 2006, Rabbi Gavriel Holtzberg said that anyone who visited the center was welcome.[16] It was not unusual for the Rabbi and his wife to have 30 people for dinner.[16] Gavriel (born 1979, raised in Brooklyn, New York) and Rivka (born 1980 in Afula, Israel) Holtzberg came to Mumbai in 2003 after completing a mission in Thailand.[17]

Three flights a week bring hundreds of Israeli travelers from Israel to Mumbai and in an interview Holtzberg said he understood the nature of their needs. The young rabbi, who was born in Israel but grew up in Brooklyn, said that they "need relief" from the army, from work, from real life.[15] He said, "they come here to do everything the army didn't allow them to do. Their shoes had to be polished and tied—here they wear sandals. They had to cut their hair—here they grow their hair long."[15]

In addition, "Jews from all nationalities stopped there—primarily Israelis, but also those from Singapore and other places. It was almost like a second home to them," said Elijah Jacob, the American Jewish Joint Distribution Committee's country manager for India. "Our country director used to say it was like a second home to him because of all of the Jews there on Shabbat."[12]

Chabad officials said they were certain the Mumbai house would reopen, and within hours of news of the Holtzbergs' deaths, young Chabad couples from around the world offered to move to Mumbai to continue their work.[14]

These are the services this Chabad House offered.[18] 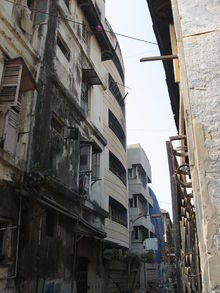 street in which Nariman House is located

The Chabad house was seized and attacked during the November 2008 Mumbai attacks.[20][21] At around 2145 hours (9:45 pm) local time on Wednesday, November 26,[5] four terrorists took advantage of the fact that local security forces were operating in several locations throughout the city.[22] Newscasters were calling it the "final assault",[23] and the building is near the Leopold Cafe, another building attacked during the strike. However according to a new report Nariman House was actually the main target on November 26 and the rest of the targets were only to amplify the effect.[24]

Initially it was reported that six Israeli Jews were being held hostage.[20] Later Chabad spokesman in Israel Moni Ender said that there were at least eight Israelis inside the house, including Rabbi Gavriel Holtzberg and his wife Rivka Holtzberg.[23][25] The rabbi's two-year-old son Moshe was rescued by his nanny,[25] Sandra Samuel, 44, who had worked for the centre for the previous five years.[26]

The terrorists "would be told by their handlers in Pakistan that the lives of Jews were worth 50 times those of non-Jews." They were tortured very badly.[27]

It was reported that gunmen fired indiscriminately towards the crowd.[20] Late on Thursday evening, State officials in India told the Associated Press that eight hostages had been released from the Chabad House.[26][28][29] Later Israeli Foreign Ministry spokesman Yigal Palmor said that the eight people seen near Chabad House were not Jewish hostages but local Indians from a home in the same compound.[4] Early Friday morning a large blast was heard at the centre as fighting continued,[30] even though other sources were reporting that the building was under the control of the Indian security forces.[4]

During the siege US Chabad official Rabbi Levi Shemtov talked with one of the terrorists on Holtzberg's cell phone.[31] The FBI and other negotiation experts helped guide him through the process, which included around five phone calls.[31][32] Having to find an Urdu speaker to speak with him, they were unable to directly speak to any of the hostages, but Shemtov did say he heard the voice of one woman screaming in English, "please help immediately."[31]

Shortly before dawn on Friday,[33] Indian security forces began an attack on the Chabad House that lasted until after sundown. The operation began when 22 NSG Commandoes rappelled out from an Indian Air Force MI-17 chopper on the roof of the building. NSG Commandoes were in position in the adjacent buildings to provide cover fire to the assault team if needed. Commandoes entered the building from the top and two loud blasts were heard followed by heavy gunfire. The whole operation was watched live on TV as news footage showed troops abseiling from a helicopter into the building, and soldiers on the ground closing in.[34] Initially it was reported that five hostages[35] were killed at the Chabad House, then six on Friday,[36][37] eight by Saturday morning[37] and the final number of six on Sunday, when two missing Israelis made contact with the Israeli Foreign Ministry.[38] When the raid ended at sundown everyone inside the building was dead,[31] including the rabbi and his wife.[39] An Indian commando was killed during the operation. According to ZAKA members, at least one hostage (Rabbi Holtzberg) might have been killed in the crossfire on Friday when the commandos moved in; this was rejected by government authorities as stories and irresponsible comments.[40] Some of the victims had been bound.[41] Some of the others were killed by the terrorists on Wednesday, and the remainder on Thursday.[38] The rabbi's wife and Orpaz had been killed many hours before Nariman House was retaken.[42] It is also believed that the Rabbi and his pregnant wife were sexually assaulted and their genitals were mutilated before they were killed.[43]

On 10 August 2010 the parents of the Holtzberg family began rebuilding Nariman House. The only thing that will remain unchanged is a wall in the baby's room.[61]