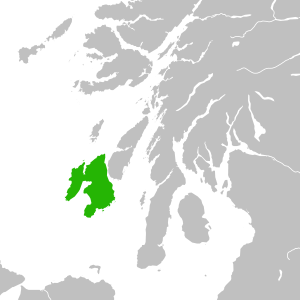 Islay has just over three thousand inhabitants. It has a total area of just over 600 square kilometres (239 square miles). Its main industries are malt whisky distilling, and tourism largely based on whisky and birdwatching.

The island is home to many bird species and is a popular destination throughout the year with bird watchers, notably in February to see a large colony of barnacle geese. Resident birds include , , , oystercatcher, cormorant and many wading birds.

The climate on Islay is often more clement than the Scottish mainland owing to the .

The earliest settlers on Islay were nomadic s who arrived during the after the retreat of the ice caps. In 1993 a flint arrowhead was found in a field near Bridgend dating from 10,800 BC, the earliest evidence of a human presence found so far in Scotland. [Moffat, Alistair (2005) "Before Scotland: The Story of Scotland Before History". London. Thames & Hudson. Page 42.] Other finds have been dated to 7,000 BC using of shells and debris from s.

Recorded history begins with a document relating to St Columba

From the 14th to the 16th centuries much of the west coast of Scotland was governed by the Lordship of the Isles from Finlaggan on Islay. A record of lands granted to an Islay resident, Brian Vicar MacKay, by the in 1408 known as the is one of the earliest records of Gaelic in public use and is a significant historical document. [cite news| work=The Herald| date=| url=http://www.theherald.co.uk/news/news/display.var.1387482.0.0.php| title=Gaelic documents may return north| author=David Ross| date=10 May 2007| accessdate=2008-01-23] The origins of the Lordship date back to the defeat of the Danes off the coast of Islay in 1156 by .

On Islay there was a Stone of Inauguration by Loch Finlaggan. It was seven feet square and had footprints cut into it. When a chief of the Clan Donald was installed as the "King of the Isles" he stood barefoot on the imprints on the stone, and with his father's stone in his hand was anointed King by the Bishop of Argyll and seven priests. During the ceremony an orator recited a list of his ancestors and he was proclaimed "Macdonald, high prince of the seed of Conn". The block was deliberately destroyed in the early seventeenth century. [ Bord (1976)]

In 1726, the island was purchased by of Shawfield for £12,000. It remained in his family's ownership until 1853, when it was sold to James Morrison, the grandfather of the first .

Starting in the 1830s, the population of the island began dropping from its peak of fifteen thousand as a result of the . Today's population is about three thousand. Most emigrants from Islay made new homes in Ontario, Canada, in the United States, and Australia.

In the early 21st century, a campus of was set up on Islay, .

The island's population is mainly centred around the villages of , Port Ellen, and Port Charlotte. Other smaller villages include , Bridgend, Ballygrant, and . The rest of the island is sparsely populated and mainly agricultural.

The south-western end of the main body is a largely rocky region called . The north western arm of the island is called the . There are several s on the island including Loch Finlaggan, Loch Gruinart, Loch Gorm, , Loch Ballygrant and Loch Allan.

Lochindaal, a sea loch which separates the Rhinns of Islay from the rest of the island, is formed along a branch of the great Glen Fault called the Loch Gruinart Fault, the main line of which passes just to the north of Colonsay. This separates the limestone, igneous intrusions and Bowmore sandstones from the Colonsay group rocks of the Rhinns. [cite web| url=http://eprints.gla.ac.uk/225/01/Thomas%5B1%5D.pdf| title=map| format=PDF| accessdate=2008-01-23] The result is occasional, minor earth tremors. [cite web| url=http://www.earthquakes.bgs.ac.uk/macroseismics/jura_macro.htm| title=Jura Earthquake 3 May 1998| publisher=| accessdate=2008-01-23]

The influence of the Gulf Stream keeps the climate mild compared to mainland Scotland. Snow is rarely seen and frosts are light and short-lived. One might expect therefore a gardener's paradise and indeed, it is not unusual to see exotic plants growing in gardens. However, the winter gales which sweep in off the Atlantic can make travelling and living on the island during the winter difficult, while ferry and air links to the mainland are frequently delayed. The weather tends to become more pleasant around Easter and the summer season then extends until well into September.

The distilleries on the south of the island produce whiskies with a very strong y flavour. From east to west they are , Lagavulin, and (which are considered to be among the most intensely flavoured of all whiskies). On the north of the island Bowmore, , , and are produced. These whiskies are substantially lighter in taste. There were more distilleries in the past: Port Ellen closed in 1983 while the Lochindaal in Port Charlotte closed as long ago as 1929. Little blending is done on the island, though since the takeover of Bruichladdich distillery by several private individuals whisky is now blended and bottled there by Master Distiller James McEwan. Bruichladdich is also noteworthy as the only distillery which bottles its malts on Islay.

In 2005, a new opened at Rockside Farm. Named , it officially opened in June, and distilled its first spirit in November. The malting floor burned down in February 2006, but has since been repaired and is back to full production.

In March 2007 Bruichladdich announced that it would reopen Port Charlotte Distillery, using equipment from the Inverleven distillery. The distillery will use the existing warehouses of the former Lochindaal Distillery while a visitors centre will be built on the current site of Clyne's Garage.

Apart from the whisky there is now an original from the Isle of Islay. The Islay Ales Brewery opened its doors on 22 March 2004 and brews seven different real ales, [cite web| url=http://www.islayales.com/| title=Ales from the Isle of Malts| publisher=Islay Ales| accessdate=2008-01-23] some of which are seasonal, or for special occasions such as the yearly Festival of Malt and Music. The brewery is located on Islay House Square just outside Bridgend.

The location of Islay, exposed to the full force of the North Atlantic, has led to it being the site of a pioneering, and Scotland's first, station near Portnahaven. The (Land Installed Marine Powered Energy Transformer) wave power generator was designed and built by Wavegen and researchers from the , and was financially backed by the European Union. Known as Limpet 500, it feeds half a megawatt of electricity into the island's grid. In 2000 it became the world's first commercial wave power station.

Islay has some of the finest fishing in Europe. Imported have not been released on the island and the "brownies" still dominate the freshwater ecosystems. In 2003 the European Fishing competition was held on five of the lochs. Most of the estates organise fishing on the rivers and lochs and maintain the banks for fishing. Sea is also popular especially over the many s around the coast.

The Finlaggan Trust has a visitor centre which is open on some days of the week.

Many of the roads on the island are single-track with passing places. The two main roads are the A846 from Ardbeg to Port Askaig via Port Ellen and Bowmore, and the A847 which runs down the east coast of the Rhinns. The island has its own bus service provided by Ben Mundell trading as .

The island has its own airport, Glenegedale Airport with services to and from Glasgow.

There are regular ferry services to Port Ellen and Port Askaig from , taking about two hours. Services to Port Askaig also run on to on and on to on Wednesdays during the summer only. These services are run by . There is also a ferry that runs from Port Askaig to on Jura. A new ferry is expected to enter service in 2011. [cite web| url=http://www.shipsofcalmac.co.uk/ships_timeline.asp| title=Fleet History| publisher=Ships of Calmac.co.uk| accessdate=2007-08-29]

Part of the action in 's book takes place on Islay, where some characters engage in birdwatching.

In the 1990s the BBC adaptation of was partly filmed in Port Charlotte and featured a race between the "" (Para Handy's puffer) and a rival puffer along the length of Loch Indaal. The local primary school children were released from classes along the length of the loch to watch the race.

Since 1973 the "Ileach" has been delivering news to the people of Islay every two weeks. This twenty-eight-page, A4-sized publication now has a circulation locally and worldwide of 3,000 copies. The "Ileach" was named Community Newspaper of the year in 2007. [cite web| url=http://www.highland.gov.uk/yourcouncil/news/newsreleases/2007/January/2007-01-18-00.htm| title=Shetland Times Retains Newspaper Of The Year Award| date=18 January 2007| accessdate=2008-01-23]

In 2007, parts of the BBC programme were recorded on Islay with Simon King being based on Islay.

The British Channel 4 television series excavated at Finlaggan on the 24 June&ndash;26 June 1994. The episode was first broadcast on 8 January 1995.

Kilarrow Parish Church (aka the Round Church) is round, legend has it, to leave no corner for the devil to hide in. The "living" is currently vacant.

The kirk on the Rhinns of Islay is just outside the village of Port Charlotte. Known as St Keiran's, the ministry is shared with the Kilmeny congregation. St John's Church of Scotland, Port Ellen is exploring a possible linkage with Kilarrow and is currently being served by a locum. Each of the vacant Church of Scotland congregations has an Interim Moderator who is responsible for the oversight of the congregation.

There are several other congregations on Islay. Baptists meet in the mornings in Port Ellen and in the evenings in Bowmore. The Scottish Episcopal Church of St. Columba is located in Bridgend and the Islay Catholic congregation also uses St Columba's for its services.

Many old church buildings on Islay are in an unroofed and ruined state; some have considerable historical interest dating from mediæval times. The ruined church of Kildalton has one of the finest carved crosses in the world; dating to the 8th century, it is carved out of the local bluestone. A carved cross of similar age, but much more heavily weathered can be found at Kilnave. [cite web| title=Archaeology Notes on Kilnave| url=http://www.rcahms.gov.uk/pls/portal/newcanmore.details_gis?inumlink=37474| publisher=| accessdate=2008-01-23] Associated with many churches are mysterious cupstones which date to prehistory; these can be seen at Kilchoman church where the carved cross there is erected on one, at Kilchiaran church on the Rhinns and at other sites. Several more recently abandoned churches have been adapted as dwellings.

Islay's most famous son of recent times is George Robertson, formerly secretary-general of NATO and British . In 1999 he was made Lord Robertson of Port Ellen.

* General Alexander McDougall, a figure in the and the first president of the , was born in Islay in 1731.

* The Islay-born Reverend (1902&ndash;1983) became known as the "Tartan Pimpernel" for his exploits in France during World War II.

* Glenn Campbell, Scottish political reporter for the BBC, was brought up on Islay and attended Islay High School [cite web| url=http://news.bbc.co.uk/1/hi/programmes/politics_show/2813111.stm| title=Meet presenter Glenn Campbell| accessdate=2008-01-23] where his performance in the annual pantomime is still remembered.

* Billy Stewart (born 1935) steered a course from Port Ellen Primary school to being the government’s Chief Scientific advisor in the late 1980s and early 1990s. Sir William Stewart as he is now known, is currently chairman of the Health Protection Agency.

* was born on Islay in 1783 and during a career around the world became governor of . He also wrote a number of books.

* of Cultoon is currently a rising star in the national shooting scene and recently won a double medal at the Bisley Grand Prix.