Kirkland Lake is a town and municipality located in Timiskaming District in Northeastern Ontario, Canada. The 2006 population, according to Statistics Canada, was 8,248.

The community name was based on a nearby lake which in turn was named after Winnifred Kirkland, a secretary of the Ontario Department of Mines in Toronto. The lake was named by surveyor Louis Rorke in 1907. Miss Kirkland never visited the town and the lake that bore her name no longer exists because of mine tailings. The community comprises Kirkland Lake, as well as Swastika, Chaput Hughes and Harvey Kirkland.

Kirkland Lake was built on gold, but it is equally as well known for producing world-famous hockey players. Indeed, legendary hockey broadcaster Foster Hewitt called Kirkland Lake "the town that made the NHL famous", likely because in the early days of the NHL, it was not uncommon to find an NHLer from the town. The town celebrates this tradition at the Hockey Heritage North museum. Until January 1, 1972, the town was known as Township of Teck. A by-law was introduced, on July 20, 1971 to change the name of the municipality to Town of Kirkland Lake, effective January 1, 1972.[2]

The Council for the Township of Teck was sworn in, in 1919. Their first task was the establishment of public utilities, including roads and water pipes, in the rapidly growing area.[3] Kirkland Lake had numerous mines, in the early years, including Teck-Hughes Mine (1917-1968), Lake Shore Mine (1918-1968), Kirkland Minerals (1919-1960), Wright-Hargreaves Mine (1921-1965), Sylvanite Mine (1927-1961), Toburn Mine (1913-1953), Adams Mine (1965-1990) and Macassa Mine (1933-1999). The Second World War dealt a blow to the local mining industry, as materials became very expensive, the price of gold was pegged and unemployment, as men went off to war, jumped. Kirkland Lake's first fire hall was established in 1935 and the second fire hall in 1955.[4] After World War II, local soldiers returned to the newly created Federal area, in the northern section of the town. A move duplicated by numerous communities welcoming back victorious soldiers.[5] A member of the Commonwealth War Graves Commission, the Kirkland Lake Cemetery contains the graves of 12 soldiers and 3 pilots of the Canadian military who died during World War II.[6]The Kirkland Lake Community Complex, now the Joe Mavrinac Commuity Complex, opened in 1979. Between October and December 1988, Kirkland Lake was the filming location for the drama film Termini Station.[7]

Kirkland Lake is nestled in the resource rich Precambrian Shield, the oldest geological formation on the planet. Nearby is the Arctic Watershed. Waters flowing south of this height of land (318 meters above sea level) flow into the Saint Lawrence River and on to the Atlantic Ocean. North of this point, all waters flow into Hudson Bay and on to the Arctic Ocean.

Noticeable local landmarks include Mount Cheminis, rising 500 meters above sea level, and many small kettle lakes, scraped out of the rock during the last Ice Age and filled with clear water.

Black spruce, Jack pine, trembling aspen, white birch, white spruce, balsam poplar, and balsam fir are the dominant trees in the area. A prominent forest form in this part of the Black Spruce distribution is The Black Spruce/Feathermoss climax forest, which characteristically exhibits moderately dense canopy and features a forest floor of feathermosses.[9] Moose, beaver, muskrat, snowshoe hare, as well as numerous predators roam this area, including marten, ermine, fisher, otter, black bear, wolf, and lynx. The many wetlands and lakes support a diversity of bird species, such as Great Blue Herons, ducks, geese, and that symbol of the north, the common loon. Ground and tree dwelling birds are also plentiful, including grouse, partridge, robins, blue jays, and gray jays as well as birds of prey such as hawks.

Kirkland Lake is the ninth largest community in Northern Ontario. Over the past twenty years, the population has declined by more than 30%, from 12,000 in 1986. This decline, reflecting the closing of the mines that were historically the largest employers in the town, has slowed in recent times. However, between the 2001 census and 2006 census, the population declined by 4.5%, the 24th highest decline in Canada.

While this is accurate, more current information indicates that the population has actually increased for the first time in decades. Using Statistics Canada Taxfiler data, the local population in 2004 was estimated at 7,580, a decline from the 2001 population of 8,616. The 2006 Census population actually shows an increase of 8.7% from 2004.

The increase in population has had a number of consequences. Housing sales have increased by over 25% since 2003. Unemployment has dropped to less than 6%. Wages have increased, with many of the new jobs being fairly well paid ones. For example, a labourer in a sawmill operation earns an average salary of $21.00 per hour, while a miner averages $24.00 per hour. Given the tight labour market, especially in the mining sector, actual wages may be significantly higher, especially once premiums and bonuses are added to the total amounts earned. Lastly, consumer confidence has increased. There has been a steady increase in the number of building permits issued over the last two years, and businesses dealing with consumer leisure or recreational items have reported increased sales. 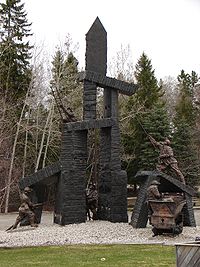 The Miners' Memorial in Kirkland Lake.

The town went through a period of economic decline towards the end of the last century, with the closing of the original mines. That ended in 2001, when Foxpoint Resources (now Kirkland Lake Gold Inc. or KLG) bought five of the mining claims in the town and began intensive exploration work. KLG successfully resuscitated the local mining scene, finding new zones of mineralization that, combined with the steadily increasing price of gold, turned the town around.[citation needed] Today, Kirkland Lake is probably one of the most successful communities of its size in Northern Ontario. Some of the more recent developments include:

These good news stories are supplemented by a number of developments occurring regionally that will have a positive impact because KL is the economic hub of the north Timiskaming District, and so the primary supplier of products, people and services to regional activities. For example:

Through the 1990s, one of the town's dominant political and economic controversies surrounded a proposal to ship Toronto's garbage to the Adams Mine, an abandoned open pit mine in Boston Township just outside of Kirkland Lake.

Kirkland Lake is also self-sufficient when it comes to power production with a generator that produces up to 117MW.

The community is also home to a campus of the Northern College of Applied Arts and Technology.

Northern College offers one-, two- and three-year programs in the fields of technology, business, human services, health and emergency services and veterinary sciences. Northern also offers post-diploma, apprenticeship, skills and job re-entry programs funded by the federal and provincial governments. The College also provides job related training. This includes providing the facilities for the delivery of third party programs, or the development of courses to meet the needs of a company.

The Kirkland and District Hospital serves the area.

Kirkland Lake is served by Ontario Northland bus and railway services (with the train station located in Swastika)[14] and the Kirkland Lake Airport[15] as well as local transportation for people with disabilities[16] and local taxi services as well as connections to the Timmins/Victor M. Power Airport and Rouyn-Noranda Airports.[17] Transportation is also provided to senior citizens and persons with disabilities, through Timiskaming Home Support, which is funded by the North East Local Health Integration Network.[18]

The Kirkland Lake area continues to support a strong tourist industry throughout the year. The summers are met with a number of anglers, hunters, and campers looking for adventure. Winters are especially popular as a result of the well maintained snow mobile trails in the area. There are also a number of tourist destinations in the area, including the recently developed Hockey Heritage North. It also has a strong community built on music. Local attractions include:

Kirkland Lake was once a town of many movie theatres, including the only current LaSalle Theatre. Defunct theatres were the Strand Theatre, Uptown Theatre and the drive-in Mel-Ron Drive In.[20]

The town is served by rebroadcasters of CITO-TV (CTV) and CBLT (CBC) which are officially licensed to the outlying community of Kearns.